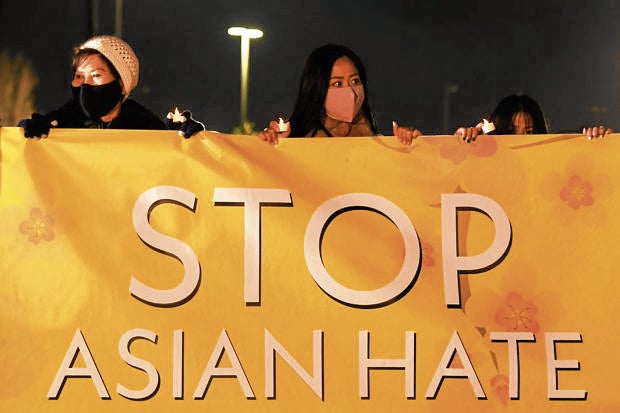 A vigil on March 4 in Fountain Valley, California —AFP PHOTOS

Recent events have revealed that the US is not only home of the brave, but also home of bigoted behavior

In the minds of many Filipinos, the United States has long stood as the land of opportunity. Many of us have undoubtedly admired the bustling cities such as New York and San Francisco, and many of our own countrymen have likewise migrated to the “land of the free” in search of better lives and employment options.

Many of us students have also dreamt of attending prestigious American institutions such as Harvard and Stanford.

However, the “land of the free” is no longer as free as we were originally led to believe. Recent events have revealed that the US is not only the home of the brave, but also the home of bigoted behavior.

The 2012 shooting of African-American teenager Trayvon Martin kickstarted the Black Lives Matter (BLM) movement that aims to raise awareness regarding the systemic injustices consistently perpetrated against black Americans. That very same movement gained even more traction after the brutal murder of George Floyd in 2020.

Now, the pandemic has similarly brought to light the deep-seated apprehensions and aversions of numerous Americans against immigrant Asians and their fellow Asian-Americans who are simply trying to survive amid the virus outbreak. The very places where Asians have resided for decades have become danger areas where their mere appearance invites trouble.

Just last March 16, six Asian-American women were murdered in Atlanta in what is believed to be a racially motivated act of terror. Hate crimes over the past year have witnessed a notable 150-percent increase in major American cities. Demands that Asians “go back home” have been repeatedly echoed throughout the US in one form or another.

Violence and discrimination against Asians in America has a long-standing history. The fear of infection and general paranoia may have only aggravated the Asian hate, due to the perceived connection of Asians, including Filipinos, with the Chinese origins of the COVID-19 virus.

The Watsonville Anti-Filipino Riots of 1930, for instance, were incited out of anger toward the willingness of Filipino immigrants to work for cheaper wages, along with other inaccurate portrayals of the Filipino social and cultural identity. Four years ago, a Las Vegas woman went on a racist rant against her Filipino neighbor over the simple matter of scattered leaves. In 2018, a Filipino woman in Portland was harassed and insulted due to her Asian appearance.

Such acts merit the rise of a new movement that addresses the needs of our fellow Asians during these perilous times. In the US, the hashtag #StopAsianHate is spreading, to raise awareness and prevent further acts of violence.

Yet, #ArrestAsianHate may serve as a more appropriate slogan to combat racial injustices against Asians and Asian-Americans. Acts of hate toward Asians definitely need to be “arrested” in the sense that members of the community should stand up against said acts. While Asian hate may be stopped with social movements for now, what is to say it will not rise again in the long run?

Acts of violence, harassment and discrimination against Asians and Asian-Americans need to be criminalized. Even the mere act of harassment can be a seed that could grow into full-fledged hate, so forming specific laws that target Asian hate can be used for correctional purposes.

The “free” environment of America nonetheless presents challenges to the introduction of legislation that protects Asians against hate.

The First Amendment, for instance, provides all Americans the freedom of speech to express their ideas, regardless of how misguided such ideas may be. However, a person’s violent use of such freedom may signal an incoming crime that itself warrants legal arrest.

In reality, many Asians in the US are merely there to take part in the American dream, just like its other citizens. Behaving in a manner that respects the true natures and contributions of each group and individual may therefore serve to aid all parties involved.

Facts, not fear, should serve as the foundations of relationships so as to ensure that we all survive and eventually thrive together.

As such, “arresting” Asian hate may even better equip the US to face its substantially high number of coronavirus cases. By creating clear programs and laws that automatically preserve and defend the rights and lives of Asians, more focus can be diverted to vaccines and other virus-prevention measures that may help calm the tensions already present in the social, economic, and political sectors of American society.

Even our dedicated front-liners, OFWs and students who hope to travel to America in the near future may benefit should the effects of the #ArrestAsianHate or #StopAsianHate movements take hold. The systems intended to halt such types of violence and discrimination may also help forge a safer America, one that truly is the land of the free, and home of those who (respectfully) behave.