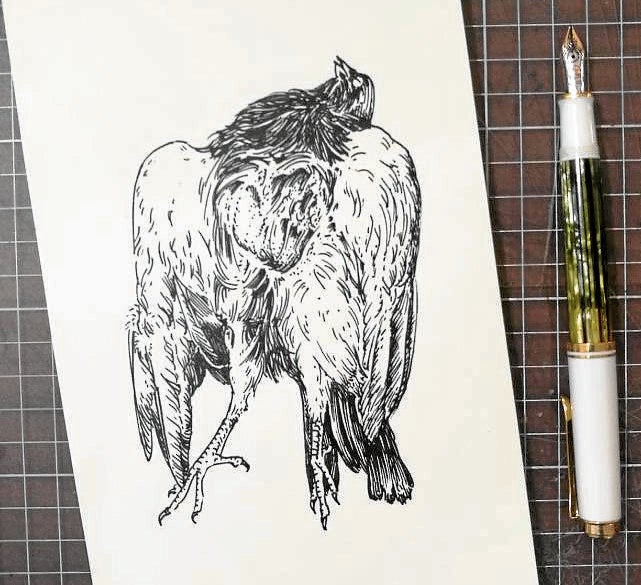 Artist Elmer Borlongan sketched this bird with his fountain pen.

When he tried the Pelikan M600, a ‘pasalubong’ from a friend from Paris, it instantly became the artist’s new favorite

The question is old but rather telling: In the event of a fire or some such calamity, what is the one thing you would save? Another version is, what item would you want with you if you were stranded on a deserted island?

For this new series in Lifestyle, we’ve rephrased the question, made it more positive, and asked people to talk about their most favorite thing. What is the one item that you use regularly, reach for almost all the time, and just can’t live without?

For prolific artist and painter Elmer Borlongan, it’s his Pelikan M600 white tortoise fountain pen, a pasalubong in 2019 from a friend who arrived from Paris. He’s only had it for less than two years but it is the one he uses the most for daily sketching.

“I actually have other fountain pens but I’m not an avid collector like others who can be very particular or are always on the lookout for the Holy Grail of fountain pens,” Borlongan told Lifestyle in a phone call from his home in Zambales.

When he tried the Pelikan M600, it instantly became his new favorite. It has a striking white tortoise barrel with flecks of green, gold and brown.

Borlongan’s friend narrated to him that when he entered the store and asked to buy the pen, the vendor pointed out that Pelikan was a German brand and that maybe, monsieur might be more inclined to buy a French brand since they were in France, after all. Monsieur’s mind was set, however, and he exited with the limited-edition Pelikan M600.

“The pen has a piston-type barrel that is easy to refill. You just twist the end to refill; it works like an injection, hinihigop n’ya yung ink.”

Aside from the way it looks and its ease of use, Borlongan likes how it feels in his hand. “The medium-size nib is perfect for sketching and cross hatching.” Cross hatching is a technique artists use to add shadow and dimension to drawn objects. It’s one he learned at an early age and that he often uses.

In an earlier interview with this writer, Borlongan narrated how his father made him do drawing exercises at home. “He would tell me to draw objects from different angles. For example, I would draw a bottle from all sides as well as from the top and the bottom. This way, I learned the basics of 3D, unlike most young children whose drawings are flat and two-dimensional.”

From drawing with pencils and regular pens, he now uses the Pelikan M600. “I like that it’s a historical brand. I’m also fascinated by the mechanism and its precision.”

Borlongan makes it a point to draw every day. He’s up at 6, has breakfast followed by a stroll. By 8 a.m., he is in his studio sketching ideas or painting on one of his large-scale canvases.

“Not a day without a line” is a favorite saying and one he ascribes to, as evidenced by the sketches, drawings and now, rubber-cut prints he shares on his Instagram account(@emongsky). INQ