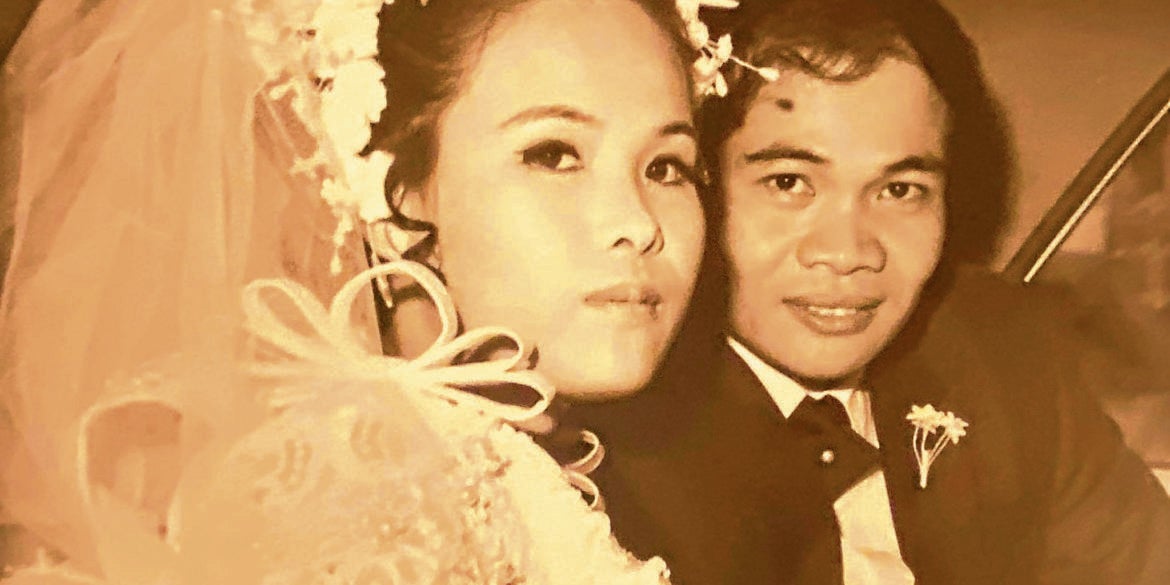 Modesta and Rodolfo Fernandez on their wedding day, March 7, 1971

For his parents’ 50th anniversary, a son writes about their wedding day

My mom Modesta was a teacher in Dagupan, and my dad Rodolfo was fighting the Viet Cong on the Mekong Delta.

He wrote her every day. Mom said the letters were late and out of order but they always arrived. After all, it took a semimiraculous chain of events (helicopter-ship-bus-jeepney) to get letters delivered to the province all the way from Vietnam. (Fun fact: the term “Filipino time” originated from the grueling and lengthy mail delivery service during the Vietnam War. Your “ito-mology” for the day). So she didn’t complain. She was just grateful he was still alive.

Then the letters stopped coming.

“They’re usually late,” she told herself. But it had been more than a week.

Those are the things you think of as a young bride-to-be. Never the worst-case scenario. How dare she even think that for one second?

She went on with the wedding plans because March 7 was just days away.

Freshly cut flowers from Baguio arrived, and my mom and her bridesmaids painstakingly decorated the church.

I haven’t had the pleasure of planning a wedding, yet but I imagine it’s a semidelicious nightmare. Now imagine doing it alone. No wedding coordinator, no Pinterest, no WhatsApp group thread “OneDickForEva,” and no groom. In my dad’s defense, he just kept sending my mom money.

“That’s all you, babe. Go crazy” (or whatever grooms say in the ’70s to enthusiastically pass the buck). Besides, dad was too busy fighting a war to think about what color should the wedding invites be: beige, eggshell, cream, ivory or French vanilla?

But there were whispers in the air.

“He hasn’t contacted her?” (The only telephone in town was downtown, and my mom didn’t know who to call.)

Everyone feared the worst. But no one had the heart to tell her. They just continued to help, but with the muted zest and lifeless zeal of those preparing for a funeral and not a wedding. It was heartbreakingly sad.

But mom was still decorating, and preparing, and inviting, and cooking and doing what needed to be done because, “Dammit, I’m marrying the man I love tomorrow.”

“I didn’t sleep for five days. I was so worried. But in my heart, I knew he was still alive,” she said.

It’s March 7, 1971. The morning of the wedding. Mom wakes up from her slumber, tired, but not with a heavy heart but a full one.

Does my dad magically appear, handsomely decked out in his barong with his kilowatt smile waiting at the altar?

That would have been too easy. Too fairy-tale-ish.

The whispers get louder.

My mom trudged on. She lovingly put on her wedding dress with the stoic poise of a hopeful yet shattered bride. She was getting married today. He was going to be at the altar just like they planned. Just like he promised.

“I will be there, my love, and I know you will be, too. I can feel it,” she whispers to the wind.

It was six hours away.

That’s the number my mom remembers. “It was six hours before my wedding,” she said and the groundskeeper was already dismantling the precious flower arrangements my dad bought her. My mom remembers that, too. How rude.

Then, out of a gleaming, dusty, noisy silver chariot—aka a rickety tricycle—emerges my dad. Exhausted. But he made it. With six hours to spare. And the rest, as they say, is history.

I can’t wait to tell their story to my kids and cringe when I tell them my “How I Met Your Mother” stories. “Um, ya, so I DM’d your mom on Twitter to get her BBM number. So if she turned me down, I didn’t technically get shot down asking for her phone number ’cause I never really asked for it in the first place. You gets?”

P.S. Oh, and about the origins of the word “Filipino time”? That’s the only thing that is untrue in this whole story. —CONTRIBUTED

The author is one of four sons. Their parents just celebrated their 50th wedding anniversary in Lake Tahoe, Nevada. Their secret to a long and lasting marriage, he says, is “love, laughter, understanding and my mom is always right.”