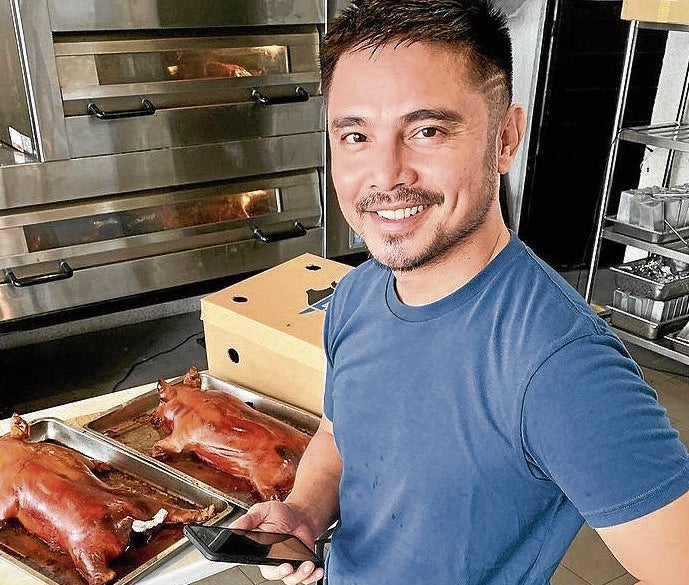 Marvin Agustin with his “cochinillo”

Given the restrictions and consequences imposed by the pandemic, it’s so easy to feel defeated. But Marvin Agustin’s successful food venture proves that with hard work and an ounce of hope, there’s no reason to be.

Bored from being locked down at home, the actor-restaurateur took to baking, something he admitted to being initially intimidated by.

“It’s intimidating because it’s not quite my personality to follow certain measurements,” he says. “The gratification is not instant. Plus, hindi mo natitikman agad.”

But he challenged himself. With the help of online tutorials and easy recipes, he even managed to sell a line of pastries with a surprisingly overwhelming demand. His supposed pastime became an unplanned business.

From banana bread and carrot cake loaves studded with walnuts and choco chips to cheese rolls, an assortment of ensaymada, and even whole cakes, his brand Mr. Vin Munchies progressed so quickly that he was forced to expand in an instant. From baking in his home kitchen, he suddenly had to find a commissary space, hire a team and legitimize his ordering system online.

Recently, he introduced his Pinoy-style chicken barbecue served with chorizo dirty rice under the brand Tito Marvs. An order comes with achara and peanut sauce. There is also his eight-hour roasted beef belly. It is marinated for 24 hours, then slow-cooked to come up with tender slices of beef topped with garlic chips.

Of the lot, it’s his cochinillo that’s become quite the bestseller. It comes in two sizes—5 kg and 6 kg—and is marinated over two full days. Sold under the brand Cochi, this bronzed beauty has such a crispy skin that it easily gives way to the pressure of a small plate. The meat is so tender, juicy and flavorful that it doesn’t really require a condiment to be enjoyed.

“It felt good that in the middle of the pandemic I was able to create this,” he says. “It was unplanned and I was just moving and pushing forward sa takot at kaba kung anong mangyayari sa ’kin, sa negosyo ko. It was also for my sanity and the livelihood of my employees.”