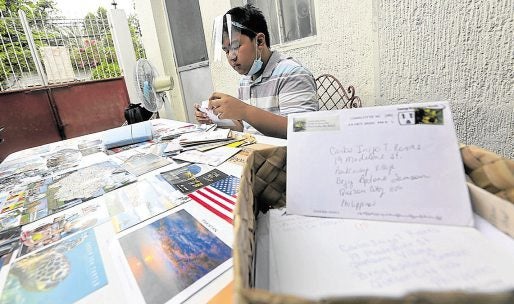 STILL EXCITED TO SEE THE MAILMAN Unlike many youths hooked on social media and who can’t put down their smartphones and other gadgets, Carlos Inigo Roxas wants to make friends the more traditional way—using pen and paper and the postal service. —MARIANNE BERMUDEZ

With lockdowns in varying degrees in force since March 2020, people are finding ways to cope with being cooped up.

Hobbies, such as baking and tending to plants, are all the rage, but an 11-year-old boy has been keeping himself busy with something different even before quarantining became the trend: He remotely connects with other people through “postcrossing,” or sending and receiving postcards.

Carlos Inigo Roxas, a Grade 5 student of the University of Santo Tomas’ Angelicum College, started out as a stamp collector. Other collectors told him he’d be able to gather more stamps by going into postcrossing.

The thrill of it

By January 2020, he was fully engaged in this new pastime.

Postcrossing involves making and mailing postcards, receiving postcards in return, or swapping them with other people.

The thrilling part of it, Roxas says, is getting something unexpected along with the postcards, such as handwritten letters, tea bags, even foreign currencies.

“[There’s] the excitement when the mailman approaches your house and hands you the mail, or when you’re reading the message, knowing who [sent it], and where it came from,” he says.

For Roxas, the postcard featuring pandemic front-liners is his most favorite. To get it, he says, one donates P50, which will be spent to buy a food pack for a front-liner.

“It’s not just about the postcard anymore; it’s already about helping others,” he says.

The message at the back of the front-liner postcard reads: “Please realize that you made a difference in someone’s life today”—a reminder that the boy finds inspiring.

Roxas mails postcards to his friends and relatives here and abroad, and even to strangers on the other side of the globe.

Because of the lockdown, it is his parents who drop off his postcards at the post office. He says they are very supportive of his hobby.

A postcrossing website created by Paulo Magalhães in 2005 allows people to exchange addresses—and “randomly, somewhere around the world, someone will send a postcard to you and you will also have to send a postcard, not to them but to someone else.”

Roxas says addresses are kept private, so that piece of personal information is safe. Or one can buy a box at the local post office and use its number instead.

Discovering more about the places and cultures of his postcard senders provides additional excitement to Roxas. “One of the things I get from this [hobby] is learning about other people’s personal lives, especially when they write to me. The postcard itself shows something you can learn, [like] when it has a map or information about the place,” he says.

A postcard he received from North America indicates that the place’s mythical beast is the “jackalope”—a piece of trivia that the boy found interesting.

With the emergence of high technology, Roxas says, the difference between sending a postcard and an email, or electronic message, to someone is that “you give your time, you give your love, to them.”

“You make an effort just to make sure they will get a card, and that’s just sincere … The words are [even more] meaningful to them,” he says.

To venture into postcrossing—a hobby that is normally inexpensive but becomes costlier when one starts buying special pens or washi tapes—Roxas recommends joining the Facebook group “PostCrossing Philippines (PCPh).”

The group has for members both beginners and longtime adherents.

“There are tips on where to buy the postcards,” says Roxas. “And [one] can also learn many tricks, such as preventing ink smudges and buying the right type of pens, among others.”

Joining the postcrossing website is an option, too, Roxas says, but for those who want to start locally, the Facebook group would be a great help.

Creating friendship with other people is the long-term benefit of doing postcrossing, the boy says.

Before the lockdown, the Facebook group hosted in-person meetups for exchanging postcards and getting to know like-minded hobbyists.

When gatherings became restricted, the group did virtual meetups, which Roxas points out, are “different from sharing postcards in real life.”

“But it’s a start while we’re in a pandemic,” he concedes.