We are all Lapu-Lapu | Inquirer Lifestyle ❮ ❯ 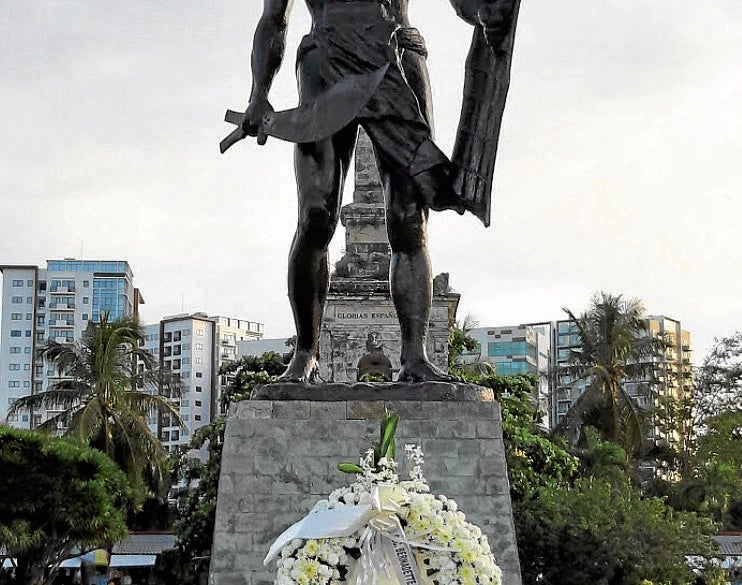 We are all Lapu-Lapu

It is understandable that the commemoration of the first world circumnavigation in the Philippines has, as highlight, the exploit of Lapu-Lapu, the local David who defeated an almighty Goliath (Magellan). The weaker one always stirs up sympathy in us.

But in the case of Lapu-Lapu, he also incites our empathy for him. If someone comes to beat me, logically I’m going to defend myself, to reject the attack, and if I have the chance, to deploy a counterattack so as to definitely expel the aggression. And that was exactly what Lapu-Lapu did. That’s why I say that we all are Lapu-Lapu. He is more than a nationalistic symbol. He represents the right to defend oneself (and his people) from any attack. He symbolizes the human will to survive.

Why did Magellan attack Mactan? His expedition was only passing by the Philippines to go to the Moluccas, the real goal of the trip.

It seems that Magellan had in mind to leave Humabon, chieftain of Cebu and Lapu-Lapu’s neighbor, as a sort of representative of King Charles, and to be recognized as boss by the other chieftains. And he also offered to fight against any enemy that Humabon could have, who might have hampered his supremacy over the others.

Magellan should have had that plan previously in his mind, since he proposed exactly the same to Colambu, the Limasawa chieftain when he met him, then ignored the existence of Humabon, or even the existence of Cebu.

Vassal to the king

But did Lapu-Lapu really object to being a vassal of King Charles? One of the members of the crew, Fernando de Bustamante, who completed with Elcano the circumnavigation, declared that those from the kingdom of Mactan wanted to obey the king of Castile. However, Magellan said they had to kiss the hand of the king of Cebu. As they did not want to do so, Magellan went to Mactan to oblige the people of this island to obey Humabon. In other words, according to Bustamante, what Lapu-Lapu did not accept was to admit the rule of Humabon on behalf of King Charles.

After the arrival of the ship Victoria in Seville three years after its departure, King Charles, already emperor at that time, called Elcano to join him in Valladolid, which was the seat of the Castilian court at that time. Elcano chose two other survivors, members of the Victoria crew, to accompany him: Ginés de Mafra and Bustamante. Once in Valladolid, the three of them had to make a sworn declaration to the alcalde Santiago Díaz de Leguizamo by answering 13 questions about controversial episodes that happened during the trip. The affidavit, dated Oct. 18, 1522, is kept in the Archive of Indies in Seville, and was included by Martín Fernández de Navarrete in his five-volume work on Spanish exploratory expeditions.

Who knows? If Magellan would not have chosen Humabon as a ruler in his plan to put the islands under the nominal sovereignty of King Charles, maybe Lapu-Lapu would have been as friendly toward the expeditioners as the other chieftains were. The policy of waiving ties with local allies, as Cortés did in Mexico, was the key to the success of the Hispanic monarchy in the Americas. Was Magellan using the same strategy? Probably yes.

Lapu-Lapu has become a symbol. The construction of a national feeling needs symbols and myths, as Álvarez Junco reminds us in his work “Helpful Gods.” For him, national identity is a historic construction. The myth is stronger if it is related to a fight with invaders, and even stronger if it is against a much more powerful enemy, and the victory is almost miraculous.

For the construction of Spanish nationalism, the figure of Don Pelayo and the battle of Covadonga against the Moors, when the Reconquista started, were fundamental. Therefore, we can trace a parallelism between Lapu-Lapu and Don Pelayo, between Mactan and Covadonga. Lapu-Lapu was not a young warrior as Conan (Schwarzenegger). He was not the one to kill Magellan. He probably was not even present in the battlefield. Historical facts’ accuracy is important, of course, but in this case, what is more important is the creation of the myth and its symbolic value, and its role in the construction of the Filipino identity.

Together with the blood compacts (sandugos) and the fact of the hospitality shown by the other chieftains, on the opposite edge, the heroism of Lapu-Lapu facing the attackers and defending his people is at the root of the construction of the Filipino identity. An identity that, as Nick Joaquin wrote, is dynamic and was forged during the Spanish presence in the archipelago. —CONTRIBUTED INQ

Javier Galvan, Ph.D., is an architect and historian and the director of Instituto Cervantes de Manila.