Meet the working student who made Miss Singapore’s national costume

‘If you have a lot of passion, there’s a way to do it. No excuses’

Miss Singapore Bernadette Belle Wu Ong was a sight to behold when she hit the Miss Universe 2020 stage for the national costume round.

She wore a red sparkly bodysuit, matching thigh-high boots and a Singapore flag-

inspired cape with billowing sleeves. When she turned to reveal the hand-painted words at the back of her cape—STOP ASIAN HATE—the crowd roared and cheered.

It was a powerful moment that made headlines around the world. Everyone picked up the story including Vogue, The Cut, Elle, People, CNN, even Diet Prada.

Ong, who was born and raised in the Philippines until she moved to Singapore when she was 11, revealed that her national costume was created by Filipino designer Arwin Versoza Meriales.

In a Zoom interview, Meriales, 22, told us that Ong first reached out to him on Instagram after seeing his work. She wanted him to design dresses for her to wear for events and dinners during the Miss Universe pageant. He said yes, of course.

Then, in late April, she called him around midnight. She said she needed his help. “Can you make me a national costume?”

But there was a problem. It was already late April, Meriales was in Quezon City, Ong was in Singapore, and she was leaving for Florida for the pageant on May 1.

“What about the shipping days? The fabrics, the materials?” Meriales wondered. 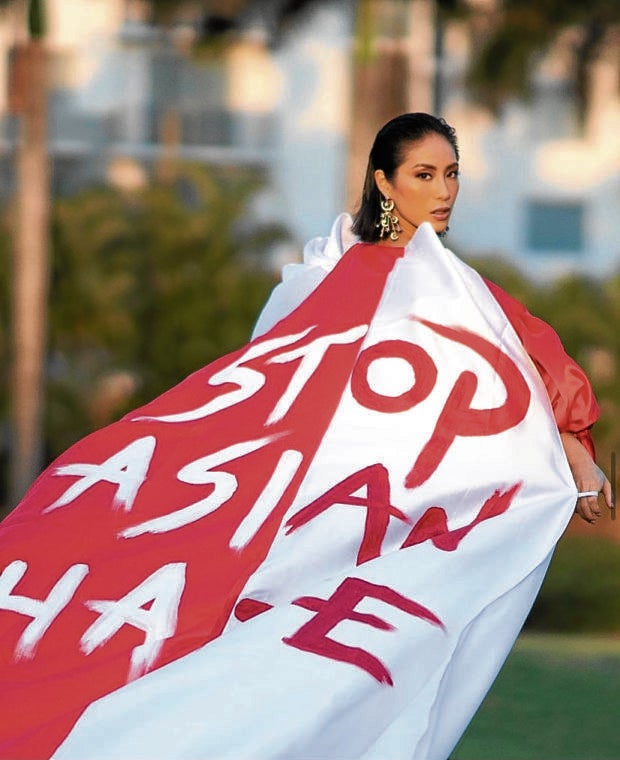 Meriales, who is in his last year of studies at a fashion school, and who had been reviewing for exams, didn’t sleep a wink that night. “Bernadette and I started coming up with the concept, the style. I started sketching and contacting my suppliers so they could deliver the fabrics in the morning.”

Part of his process was also doing research on Ong. He read articles about the beauty queen and was struck by a piece where she talked about the

“I wanted to put a statement at the back,” he said. “I like pieces that make a statement. All my creations, there’s a story behind them. Gusto ko ’yung gawa ko, hindi mo na kailangan i-explain, you can already see the story behind the design.”

Ong loved the idea. “What is this platform for if I can’t use it to send a strong message of resistance against prejudice and violence!” she wrote on Instagram.

Because Meriales was out of time, he called on his friend Paulo Pilapil Espinosa to hand-paint the message at the back of the cape. “Sobrang galing niyang artist,” said Meriales.

Working round the clock and skipping meals, Meriales finished the costume in less than two days.

But there was a problem—DHL said that shipping to Singapore would take four days. He was going to ship it on April 27 and that meant the package would arrive on the day Ong was supposed to fly to the United States.

Maybe it wasn’t meant to be. But he was undeterred. He tried to come up with alternative ways to get the garment to her. Maybe he could ship it to his aunt who lives in Florida? In the end, he decided to risk it.

“I said, I’ll just send it to Singapore. Maybe it would make it.”

Meriales also called the shipping company and spoke with a very nice manager who said they’d try to help. “Kinabukasan, natanggap na ni Bernadette! I was so happy I cried,” he said.

But he knew Ong had another option for her national costume. So up until the last minute, he wasn’t sure if she would even wear his creation.

When she did, Meriales had a huge reaction. “I was shocked, I was crying, natapon ko ’yung coffee ko, talagang nagtatalon-

talon ako to the highest level. Since I was a kid, it had been my dream to see my designs on the Miss Universe stage.”

But it was a place where he started dreaming. He knew he wanted to be a fashion designer at a young age. He would see his grandmother Amelita Amil sewing their clothes. “I told her I wanted to learn so she taught me.”

Interestingly, the first garment he created was also a national costume, worn by a student at his high school, Holy Cross of Caburan. It won a prize.

Meriales, who describes his style as edgy, minimal and couture, started accepting clients at the age of 15. That’s also when he started to study fashion.

He said his clients love how his creations fit them. “And super linis kasi ako talaga yung nagtatahi.”

He has reliable seamstresses that he works with. “I want to help them also.”

Meriales credits fashion designers Edgar Buyan and Trixie Zarate. “They became my mentors while I worked for them. I’ve always been a working student.”

As expected, after Miss Singapore’s national costume went viral, he has been flooded by requests from potential clients from all over the world, from as far as Kenya and France. “Oh my god, ang dami, every single day,” he said.

He hasn’t had the chance to really enjoy all the attention because he’s been neck-deep in school work. School remains a priority for him. “I’m a scholar and I’m running for Latin honors so kailangan ko talaga i-push ’to.”

Life is a juggling act for this student. He’s busy working on his thesis but he’s also preparing for LA Fashion Week this year. “Mahirap siya but if you have a lot of passion, there’s a way to do it. No excuses. If you really love your craft, you don’t feel tired eh.”

He plans to get a master’s degree as well. “I really enjoy studying and learning so much.”

To other aspiring designers, he has this to say: “If you have a goal, you can achieve it as long as you really believe in yourself and you have faith. Don’t rush. Just wait for the right time and work hard for it. More practice, don’t be afraid to make mistakes and listen to other people. That’s how you learn.”