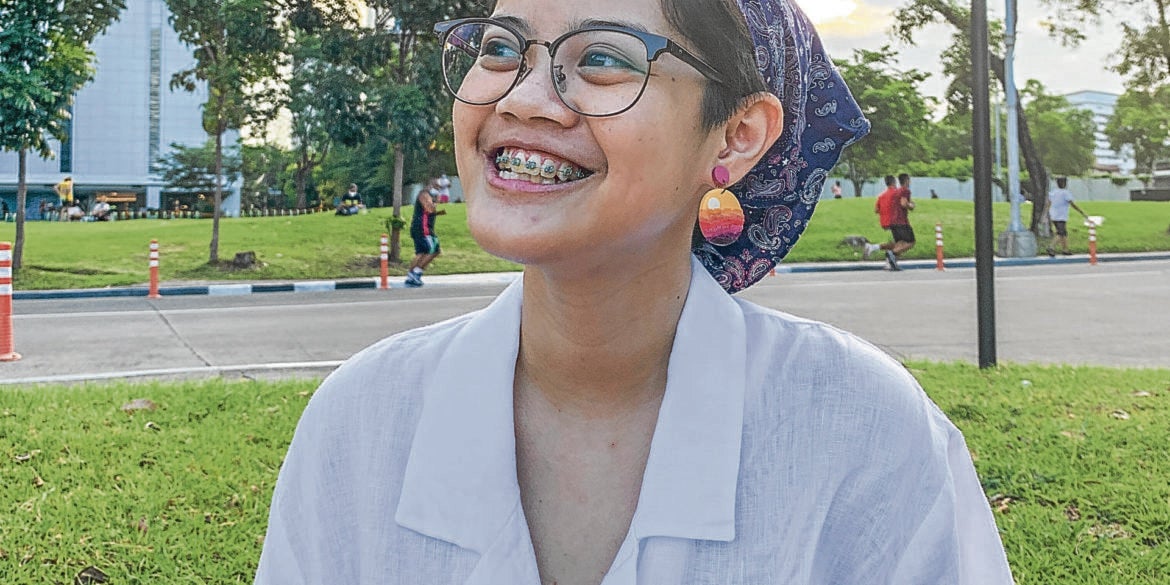 The freshman who ran for Ateneo student council president—and won

They say the greatest leaders are unafraid of taking risks. This definitely applies to Kara Angan, the AB Political Science freshman who bravely ran for student council president of Ateneo de Manila University.

After garnering 1,371 or 70.2 percent of the votes in the election’s initial results, Angan is set to officially start her term as Sanggunian president for 2021-2022 on June 5.

Her path to success was definitely not easy, amid questions about her lack of experience. The openly gay Angan, 19, said that she never specifically aspired for the position, but she has always known that her passion for student leadership would somehow lead her to the Sanggunian.

“I don’t think any freshman in their right mind would run for president. But I’ve always known that I would be engaging with Sanggu in one way or another, [and] I’ve always been outspoken about how I feel about Sanggu and its direction,” she said, recounting her reasons for running.

The earliest archives of The Guidon—Ateneo’s official student publication—date back to 2003, and records show that all Sanggunian presidents from that period onward have served their term as juniors or seniors. This makes Angan the very first freshman to attain the Loyola Schools (LS) student council presidency in nearly 20 years.

Interestingly, this isn’t the first time that Angan is running for a leadership position under such unique circumstances. When she ran for Humanities and Social Sciences vice chair in Ateneo Senior High School Sanggunian, she was a female transferee who encountered pushback from a male-dominated student body.

“I’m in a similar position as I was before. And the people back then were a lot meaner. We’re talking about physical intimidation, like groups of males booing women during their town hall debates,” she said.

Despite resistance, she won and even became the Assembly of Class Officers vice president the following year. When she started her college journey, she joined the League of Independent Organizations as a deputy member for sectoral affairs and became a student volunteer for Ateneo’s Office of the Vice President for Social Development.

Angan’s track record clearly shows that she’s no stranger to leadership positions, but this didn’t stop the LS community from questioning her capabilities.

“I remember one of the first posts was like, ‘Are we really just going to allow this freshman to run just because no one else ran? She hasn’t even set foot on campus yet.’ I get it, but it was just my name and my year that came out. There was nothing else to base it off on,” she said.

She also pointed out that when outgoing Sanggunian president Jb Bejarin ran for Sanggunian vice president in 2019, he was still a freshman. However, students were a lot more supportive of his campaign because he was already a Sanggunian member at the time.

Bejarin said that people are doubtful of Angan’s capabilities because she is not only a freshman, but a Sanggunian newcomer as well. But he acknowledged that anyone can run for president, and Angan will just have to work on addressing these concerns during her term.

“I could very well draw parallels between us. I was thinking [about the same concerns] but then this glass ceiling has been broken before, and Kara’s just attempting to take another crack at it,” he said.

Angan initially took the student body’s backlash personally, so her defense mechanism was to overassert her capabilities. After realizing that this only made her come off as inauthentic, she decided to be transparent with her limitations and simply trust her own platform.

“Any president, whether they’re fourth-year or first-year, will always have a limited view of the entire student experience. I acknowledge that I am a freshman and these are very valid concerns, but I do have a plan, and we can get there by working together,” she said.

Angan plans to deal with the root causes of students’ concerns through three primary thrusts: student representation, public participation and two-way communication. She will still adjust her specific initiatives based on how the current term ends, but she is certain that she will focus on these three objectives.

“I really just wanted to keep it very short and simple because I believe that everything else follows if we can have a deeper grasp of these foundational pillars of student governance. That’s how we’re able to, at the very least, have the tools to be able to solve the other problems,” she said.

Bejarin believes that Angan’s plans follow a logical flow, but he also suggests for her to build relations with the LS community and translate these processes into concrete solutions. He added that she should also think of short-term plans for pressing concerns such as online classes and outsourced LS workers.

Bejarin has witnessed Angan’s work ethic for around three years now, and he is confident that her drive and willingness to learn will guide her.

“When she gets into something, she’s very driven to know the ins and outs. I think what fires her are her values, and what she knows are the values she brings to the table. Her work ethic, in the past roles she’s held, has translated to results,” he said.

In the meantime, the incumbent and incoming officers are undergoing a transition period to ensure a smooth turnover in June. Bejarin reassures that Angan will never be alone in the role as her fellow officers are there to help her.

“The burden doesn’t need to be hers alone. Sometimes it will feel that way, most especially because no one really understands what it feels to be in that role in the first place. No matter how hard or how sad it may seem, I hope that she always sees value and fulfillment in what she does,” he said.

Even with meticulous preparations in place, Angan admitted that she does not feel completely ready for her term. After all, she is fully aware that challenges have persisted and will continue to persist in her student leadership journey.

But for the sake of serving the community, she still chooses to push forward—and she encourages others to be courageous enough to do so as well.

“You’ll never know if you don’t try. I think it’s a privilege to be able to be in a position to take risks especially in this climate, but taking risks is the only way that we learn. I think leadership in this time necessitates a holistic approach and a holistic look at service and compassion,” she said. —CONTRIBUTED

The author is an AB Communication senior at Ateneo de Manila University.