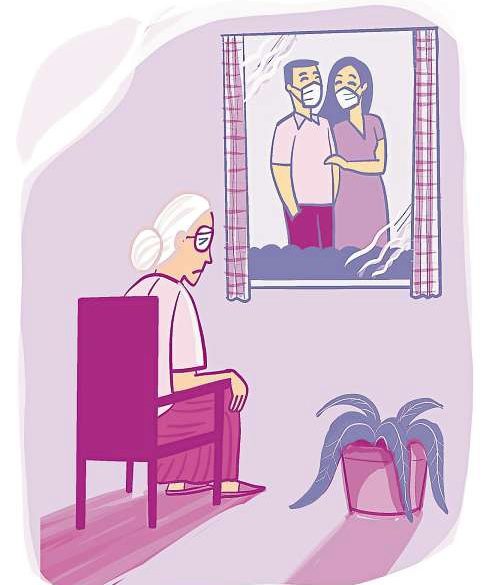 The lockdowns have helped protect seniors, but the isolation has also led to depression, cognitive decline and other medical complications

“To care for those who once cared for us is one of the highest honors.”—Tia Walker, author

When I moved into my new home in April, I realized I could not have the usual one-time housewarming for family, relatives and friends due to the government’s restrictions on large gatherings. So, I decided to just have small get-togethers for compatible groups from time to time. I felt intimate lunches or dinners were more conducive to effective bonding with people I had hardly seen since the lockdowns started last year.

The first person that came to my mind was a close relative I grew up with, whom I had not seen for some time, and whose birthday I remembered was fast approaching. Since he lived alone in a condominium, I decided to ask him over for lunch, and he was very happy to be picked up by my driver.

We enjoyed the whole afternoon reminiscing about our younger days. It was already evening by the time I had him brought home, and I realized that since he didn’t go out for long spells, interacting in person with a peer was a special treat for him. He called me up several times afterward to thank me and tell me how much he had enjoyed that day. I assured him we would get together again soon.

I had another close friend, a former classmate, who called me up before the pandemic to ask me if he could rent a room in the house I was building. I could not commit, and I told him it would take some time before the house would be ready. He was also living alone and had his own place, which he probably wanted to sell, but I sensed that what he was really missing and looking for was company. Sad to say, several months later, he suddenly died of a heart attack while all alone at home.

One of my sons-in-law is a personal trainer who specializes in the physical fitness and rehabilitation of seniors, servicing them in their homes. He often tells my daughter that he spends as much time listening to his clients as he does guiding them through their exercise routine.

He says that some of the mostly one-way conversations are pleasant enough, but some are venting sessions for expressing pent-up feelings about a lot of things, including gripes against their children and other people. His conclusion is that these elderly clients need someone to talk to, something they don’t get much of in their own households. This situation seems to be common among the elderly who live alone, or are largely neglected wherever they live.

The seniors in our residential village are probably more fortunate because here we have a strong sense of community and many opportunities for positive social interaction. We have a family-oriented country club, home to many regular, close-knit groups in a number of sports—golf, tennis, badminton, bowling, dance exercise, etc., many of whose enthusiasts are seniors.

In our village, we also have informal senior groups that regularly meet for breakfast, lunch or dinner, as well as walking groups, a garden club, a very active senior citizens’ association and several church-based lay organizations where many seniors serve. Unfortunately, because of the pandemic, these groups have scaled back or suspended their in-person activities.

As people grow old, they are increasingly dependent on others for assistance—in going through their daily routines, keeping themselves physically and mentally healthy, ensuring their personal safety, managing their finances and a host of other things they previously did by themselves.

But seniors have one important need, and this is true in any situation—the psychological need for personal and social interaction. This is something their loved ones, especially their children, have to be aware of constantly, especially during this time of the pandemic and forced lockdowns.

An article by Claire Samuels titled “Facts about Senior Isolation and the Effects of Loneliness that Will Stun You” states that while lockdowns and social restrictions have helped protect seniors, these have also limited interaction with friends and family. Research suggests that this isolation can lead to depression, weight loss, cognitive decline and other medical complications (aplaceformom.com).

Citing various sources, the same article lists some of the specific effects of isolation: significantly higher blood pressure and stress levels among lonely people, especially seniors; unhealthy habits, such as smoking and drinking to excess; neglect of physical activity; and increased risk of Alzheimer’s disease.

This is why it is important for the family, especially the children of older people, to come up with some effective interventions, such as promoting a sense of purpose (e.g., volunteer work in the community or an interesting hobby they can immense themselves in); making transportation available so they can get around; getting them a pet they can take care of; encouraging them to exercise regularly; helping with doctor visits; making family and friend interactions a priority (Dana Larsen, aplaceformom.com).

In my case, I can say that I am very blessed to have five super-caring daughters who are ever-solicitous of their octogenarian dad who often forgets that he is no longer a young buck. They have not only helped me build and furnish my new home, but one of them has practically taken charge of its running and upkeep. And I strongly suspect that they have an agreement that at least one of them visits me with her family each weekend. A parent in his advancing senior years can’t ask for more. —CONTRIBUTED INQ