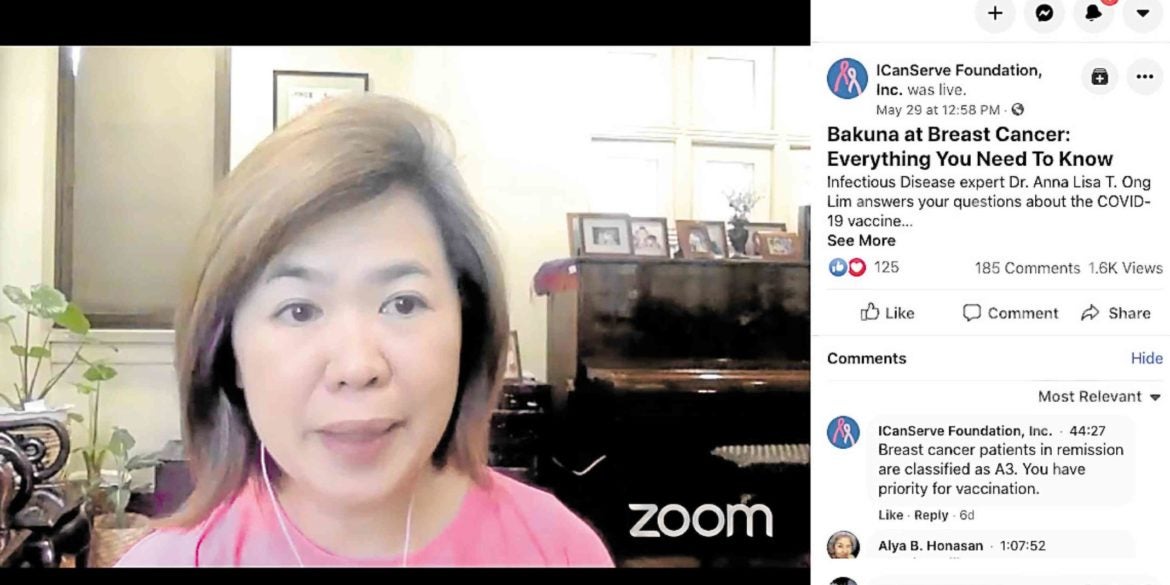 Is COVID jab safe for cancer patients on active treatment?

Which vaccine is best, what are the risks, and other nagging questions answered

Cancer should not stop someone from receiving the COVID-19 vaccine, said Dr. Anna Lisa T. Ong-Lim.

Ong-Lim, an infectious and tropical disease expert and professor at the University of the Philippines Manila College of Medicine-Philippine General Hospital, was speaking at the May 29 online forum, “Bakuna at Breast Cancer: Everything You Need to Know,” that streamed live on the ICanServe Facebook page. ICanServe Foundation is a nonprofit that advocates for the early detection of breast cancer.

“The vaccine is very new, and I guess that gives people a little bit of hesitation—no record of safety and efficacy in there,” Ong-Lim continued.

“We need to balance waiting forever for all of this data to come in versus using what we have right now, which is very acceptable to address the pandemic. In terms of risk-benefit assessment, it emphasizes that we can benefit from this vaccine now, even as we continue to monitor the outcomes of the trials.”

For COVID-19 vaccine, there are currently three technologies available in the Philippines: whole virus platform, mRNA and viral vector.

Ong-Lim explained that the whole virus platform like Sinovac is also used for measles or many flu and hepatitis vaccines. “You just get the whole virus, you kill it, you put it in a vaccine, you inject it, and the body reacts to it and produces the soldiers.”

The mRNA (Pfizer and Moderna), instead of using bits of the virus or using the virus itself, uses the virus’ genetic material, she said. “The instruction manual, so to speak, and that finds its way into the vaccine and is injected into the body. The body’s machinery produces the part of the virus that’s the target, as well as the antibody.”

The viral vector, as used by AstraZeneca, Sputnik V and Johnson & Johnson, uses a modified, harmless version of a different virus as a vector, or carrier, to deliver immunity instructions to cells in the body. The body then follows those instructions to build an immune response to the intended virus.

“So, basically, to get the body to produce soldiers to fight against the virus, they’re either using the whole virus, bits of the virus, or genetic material of the virus,” she said.

But the burning question every Filipino has is, which technology is better?

Ong-Lim said that in terms of how effective it is in preventing the disease, “their numbers are actually quite comparable, and particularly with respect to the applications versus severe disease. And there, the numbers are pretty much similar across the different platforms.”

She admits the experience with the COVID-19 vaccines is limited. “We’re just hitting the first year of observations. But, of course, before we got to that point, there were earlier stages where they already demonstrated safety and efficacy.”

Unfortunately, most of those clinical trials only included healthy people. How about cancer patients undergoing treatment like chemotherapy?

“The thinking is that, because cancer patients are immunocompromised, their immune systems are not at their peak. But they are more susceptible to COVID, so they should be the prime target to be protected,” she said.

Ong-Lim said there’s no issue about cancer patients’ bodies not being able to manage the vaccine. “It’s either dead-virus bits and pieces of the virus or just genetic material. It’s not the live virus that’s going into their systems. The problem really is that you might not hit the peak protection that you’re expecting to get. So that’s a concern.”

Cancer patients on active treatment, such as radiotherapy or chemotherapy, qualify for the vaccine. Still, they must consult with their clinicians first. “The concern is not safety; it’s how well you will respond to it, though that’s still better than not being vaccinated,” she said.

Ong-Lim said that from observations, there hadn’t been a higher rate of adverse reactions among cancer patients compared to the rest of the population who had been vaccinated.

Reported side effects are mostly local site reactions like pain, swelling, redness, a slight fever. Some feel under the weather, others a little body weakness, but that’s about it.

“And the rates for that, for the general population, are four to five per 1,000, so it’s not very frequent, actually,” she said. “There are reports more concerning, like severe allergic reactions, but that’s in the rate of one in 400,000 doses, so again, it’s not very common.”

She added, “You will probably get the clearance from your clinician because there are optimal timings for the vaccine in relation to the therapies you’re receiving and in relation to the diagnostics that you might have to schedule as part of your regular treatments.”

The clinician who will issue the clearance decides on a suitable schedule. Chemo patients are usually well enough to be vaccinated if the blood counts are acceptable, she said.

Some two-dose vaccines are given 21 days apart; others follow a 28-day schedule. Some other vaccines need to be given optimally 12 weeks in between.

Getting inoculated might make one feel off; nobody wants to deal with any other issues relating to vaccination, she said. “So you want to feel like you’re already recovering before you have your vaccine. Or maybe you may want to give it a little bit of time after vaccination before you go to your next chemo.”

As for cancer patients with comorbidities, Ong-Lim advises seeking the clearance of their oncologists. “If you are functional on a day-to-day basis, you can manage yourself, you’re not in the hospital, you’re not sick, you qualify for vaccination. But it’s best to consult an oncologist.”

Cancer patients undergoing their therapies are expected to be immunocompromised. For this population, there’s a higher risk of being exposed and infected with COVID-19.

“There’s also the higher risk of getting the more severe forms of the disease or even dying from it. So that’s really why—even as we understand that there are risks in getting vaccinated—the benefit of vaccination outweighs those risks,” Ong-Lim said.

She admitted that there was still not enough information on whether these vaccines were transmission-blocking or could reject infection.

“I’m fine to be infected, just so long as you tell me I’m not going to get sick, go to the (intensive care unit), or die from it,” Ong-Lim said. “Because without the vaccine, those are all possible scenarios. What we’re trying to do now, really, is to make this disease more manageable.”—CONTRIBUTED INQ