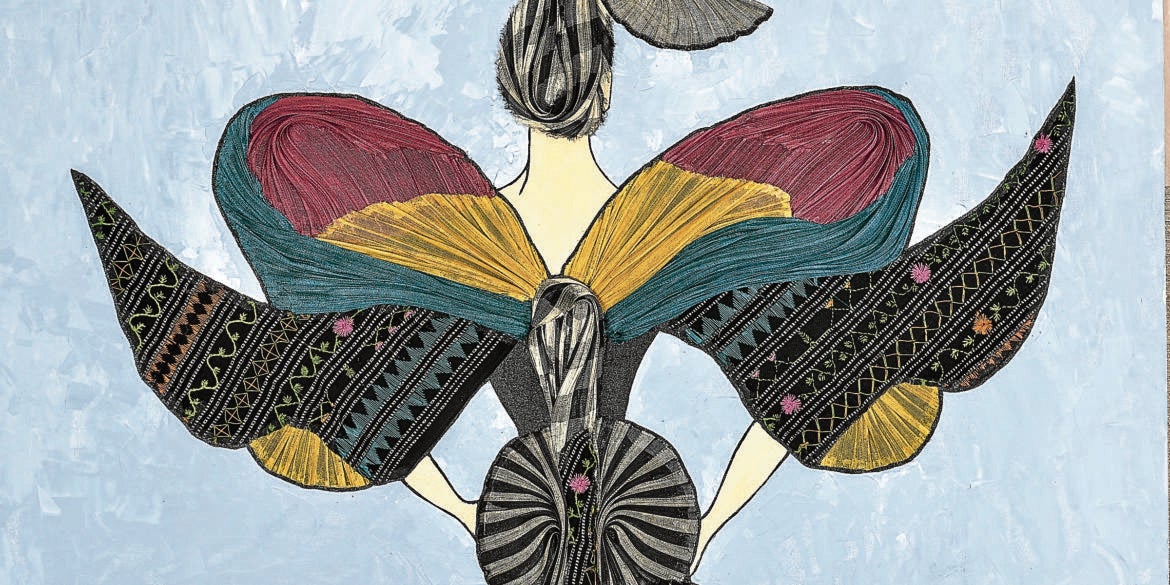 With a huge inventory of modern Filipiniana on her hands after a series of lockdowns, and following the inevitable decline of special-

During the third lockdown, the designer, whose namesake label is known for organic, sculpture-like fashion, confidently put her original genius to work. “Metta Morphe,” an ongoing exhibit at her residence/shop, reveals that fully emerged visual artist. Using remnants from earlier pieces, she created 17 representations of local goddesses through assemblage.

Back in college, Sandico heeded her mother’s advice to take up an entrepreneurial course. She switched from fine arts, major in advertising, at the University of the Philippines, to fashion merchandising at the Wood Tobé-Coburn School in New York.

In the mid-’80s, Sandico became one of the first in her field to use local textiles for contemporary fashion, experimenting with abel Iloko and piña with linen.

She found her niche with Bicolano weavers, who helped her develop the coarse abaca into a luxurious fabric with a blend of banana fibers. For this, she coined the term “banaca.” She had the fabric processed, woven and dyed in Baras, Catanduanes. Pleating and hand-painting were done in her workshop in Manila.

Throughout the years that Sandico worked on fabric development, her passion for visual arts was hushed up. She likens this current exhibit to herself as a butterfly emerging from a cocoon.

“The artworks are merely an extension of the way I express myself in fashion,” she says. Her trademark curls and loops, which add exaggerated but soft shapes to her clothes, are translated on canvas using mixed media.

Her signature piece, “Makiling,” goddess of the environment, depicts a lady with a parakeet perched on her head. Her overstated shawl collar is made of swirls of pleated banaca in red, aqua and gold, highlighted by a swag of Mangyan embroidery. Her skirt is a series of banaca twirls in contrasting stripes. Chic designer with pet parakeet—Sandico says it’s her avatar.

Each goddess symbolizes a virtue that celebrates empowerment.

“Mayari,” goddess of the night, wears a detailed gown made of banaca flowerettes and cascading pleats. “Lakambini,” patron of transgenders, is swathed in a cloud of black-and-white patterned banaca brushing against bold colors.

None of these works were made on a whim; Sandico’s process is by the book. She primes the canvas and starts with sketches. The plaster face, arms and legs are then set and sculpted. Banaca scraps are coiled, curled and snaked to serve as the goddess’ voluminous clothes and hair. The curvaceous silhouette adds movement.

Her followers will recognize the characteristic combination of strong colors—for instance, golden brown, green, blue and violet for “Diwata,” goddess of contentment—and fiery shades of red and orange leaves that enfold “Hanan,” protector of hunters.

Sandico sees the exhibit as a reward for passing tests that she faced last year. She had to stop operating her two outlets in Rustan’s since sales were nil as a result of the lockdowns. Like many entrepreneurs, she retrenched workers but still had to extend ayuda to a skeleton staff despite no revenues.

For many years, Sandico has been supporting the weaving community, paying the artisans a premium for their banaca output. Likewise, she has always been a donor to the private school, which had set aside a room for the weavers.

“Before the pandemic, I had 30 weavers because we were exporting,” she recalls. “Last year, I had to cut down their number to 10. After the typhoon, I had only five left.”

To rebuild the weaving center, Sandico sought help from Habi: The Philippine Textile Council. She also met up with Antonia Yulo Loyzaga, chairperson of the International Advisory Board of the Manila Observatory, who enlisted an architect to design the workshop pro bono.

When Sandico started giving virtual tours of her showroom via Facebook Live last May, sales gradually picked up. Thus, the exhibit is not only a new chapter for her as an artist; it is also an expression of gratitude for her business bouncing back. Proceeds of “Metta Morphe” will go to the weaving center and the school.

“I’m not giving up the wraps and fashion,” Sandico clarifies. “The art that I am doing now is a means to connect with my Higher Self. I just keep my mind quiet, invoke the Divine, and He sends the light.”