A home built as if for WFH lifestyle | Inquirer Lifestyle ❮ ❯ 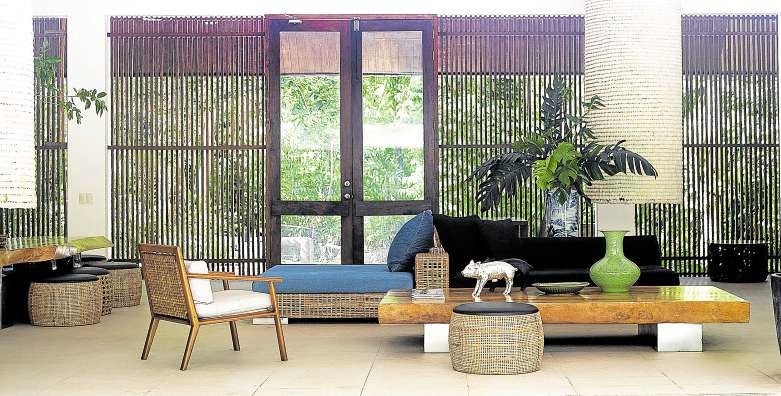 The key pieces of a modular sofa with woven rattan and denim upholstery, an acacia solid wood coffee table and accent chairs with slanted armrests can easily be rearranged to create a new vibe.

A home built as if for WFH lifestyle

While staying home and migrating to the digital world were foisted on most people, interior designer Milo Naval needed just a little adjustment.

He has been in work from home mode since 2013. It seems he saw this shift coming when he and his wife built a hotel, Siama, in Sorsogon City, Sorsogon, her home province. They envisioned it as a showcase for Naval’s modern tropical furniture and aesthetics.

Throughout these eight years, his designs have been sent to the factory via email, furniture and lighting prototypes evaluated through video calls. E-commerce has made things easier for his clients, too. Long story short, he has been a lot busier since the start of the pandemic.

And then the couple needed a private place near Siama. They built a bungalow next door, which inadvertently became another showcase, if a bit more compact, a practical illustration that, Naval says, “Whatever I design for a hotel could work for a residence.”

Casa Bulan (bulan is moon in Bicolano) is a modern house made of concrete, ceramic tiles and luktub, a weather-resistant wood used to build boats. Homogenous stone tile flooring makes for easy maintenance.

An open plan maximizes use of space in the living room, dining room, lounge and quiet corners for conversation. Cool air from the outside makes its way in through an opening, while warm interior air is pushed up and out through the slatted walls. A vaulted ceiling adds to the airiness. There are two bedrooms, one of which faces the pool and garden.

The crux of the design is Naval’s interiors, which harness the uncluttered lines, neutral tones and focused vibe of a modern house. Deliberate use of locally sourced materials ties Casa Bulan closely to the natural environment of the property.

Naval is a man of few words. This is reflected in the simplicity of his furniture pieces, most strikingly the absence of ornamentation. The key pieces are long, streamlined and horizontal, complementing an easygoing lifestyle and indicative of his own laidback personality.

The basic elements in Casa Bulan bring texture, spirit and grace to a space that would otherwise be bland. Furniture pieces are made of acacia and mango wood; local mahogany was used for the slatted cabinets and chairs. The rattan poles on the bed frame create a rhythmic pattern. OMO’s (On My Own) signature solihiya, or woven rattan pattern, on the stools and armchairs, lends a rustic mood.

Giant lamps made from local shells were specifically created to emphasize the vault ceiling and visually heighten the space. The accent pieces are minimal such as the antique celadon vase and a blue-and-white ceramic jar

Naval elaborates: “The space consists of islands of furniture arranged in such a way that you can effortlessly move around them. Each piece has been configured many times since my designs are modular. Overall, I’d say the decor is spare; we put out only the things that we need and things that I like. I’m not after anything expensive.”

Comfort, functionality and ease have always been the hallmarks of Naval’s favored modern tropical viewpoint. In the context of a global shelter-in-place lifestyle, these elements are relevant now, more than ever. —CONTRIBUTED INQ