In Dumaguete, a chapel that towers with ‘cathedral-like feeling’ | Inquirer Lifestyle ❮ ❯ 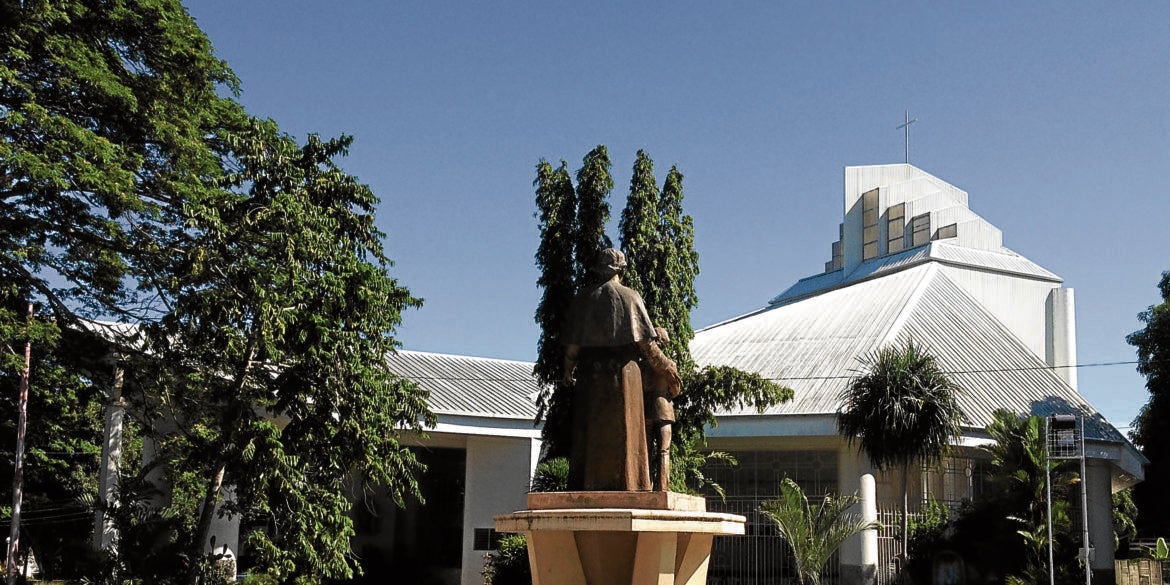 The temple stands on a 45-degree angled axis in contrast to the grid-like outline of existing buildings.

In Dumaguete, a chapel that towers with ‘cathedral-like feeling’

As architect Ned Carlos’ pioneering chapel at St. Louis School-Don Bosco in Dumaguete City celebrates its 16th anniversary this year, its organic-inspired form—a reflection of the architect’s ageless aesthetic of intangible pragmatism—is more suitable for the COVID era than ever.

It’s been more than a decade since Dumaguete City has seen an abstract work of architecture. Take note, the St. John Bosco chapel was completed in 2005, two years before the first iPhone was launched. At the time, sacred buildings in Negros Oriental were designed like they were still in the Spanish era, ushering modern architecture’s ascendancy.

The exterior design’s roof with the unique design of a skylight, symbolizing Mt. Sinai with emphasis on vertical lines pointing toward the heavens. The sharp contrast between the sophisticated truss system of the skylight above and the rather simple floor plan below emphasizes the intention of allowing God to enter the ordinariness of school life.

“This might have been the sentiment of Moses while coming from the desert, as he ascended into Mt. Sinai in order to receive the Ten Commandments,” said the architect.

The whole design is in service of an integral religious vision. Central in plan but octagonal in shape, the nave and the aisles seem to emanate from the cross in front. Their color resembles red wine, symbolizing the Blood of Christ flowing throughout the Bosconian community. White and shades of white were used for toning the chapel. This, according to the architect, gives an ambience of Christ’s purity.

The chapel sits on a 45-degree angled axis against the grid-like pattern of existing school buildings. The academic community wanted an octagonal plan tilted at 45 degrees so it would have a different layout from the rest of the campus structures which are rectilinear. One gets the best view of the chapel while standing in front of the school’s gymnasium. It rises 24 meters in height, equivalent to an eight-story building.

Catholic schools are not complete without a visible chapel. Don Bosco in Dumaguete was in need of one from its founding in 1967.

St. John Bosco Chapel had its festive consecration on Jan. 31, 2005. It is recognizable among the buildings within the school campus for its clear architectural design. Albeit small in size for the school community, with only 300 seating capacity, the chapel is the most dominating structure in the school campus, just as the rector wanted. It was completed with a budget of only P8 million.

The principal architect of Carlos & Antique Architects describes the chapel’s “cathedral-like feeling”: “Through the high ceiling, the awe of a medieval cathedral will overcome you not only from outside, but also upon entering the chapel to pray or to receive sacraments.”

Carlos had to think about the chapel’s future use. “This chapel is intended for school use, but there’s a Mass every Sunday open to the public. The rector also wanted it for weddings because its income would be used for the chapel’s maintenance,” he said.

“There is a porte cochere, a festive portal area,” he added. “The rector wanted this because the chapel is to be used for weddings as well. Why should the bride get wet when it rains or get soaked in sweat when it’s too hot?”

But the focus, as in all Catholic churches, is on the sacred area. The most important place in the chapel remains the altar. The rector wanted it in granite, but the budget did not permit it. Terrazzo with red marble chips was used. The ambo (lectern) is also made of terrazzo.

The school administration promotes the important Sacrament of Confession. “It is the only air-conditioned room, though natural ventilation can also be used,” Carlos said of the confessional. “It can only accommodate the priest and one student. We used wooden doors with glass, so the inside can be seen. We found the best location for it near the entrance, giving the students who are coming in some privacy, so that they are encouraged to receive the Sacrament.”

The whole chapel was designed to exploit natural ventilation: the altar area is well ventilated by concealed windows from the sidewalls; the choir area has decorative circular holes on the back wall; and the sanctuary has five-grilled partitions.

“I have always thought that the church building should be the most beautiful, the most elaborate in any given community. Even the prophet Haggai encourages us to complete the House of God in our communities,” said Carlos.

“The St. John Bosco Chapel is by far my most satisfying project. Although small in budget at only P8 million at 2004 prices, I enjoyed that the rector gave me a free hand to design a modern chapel that was actually built.”