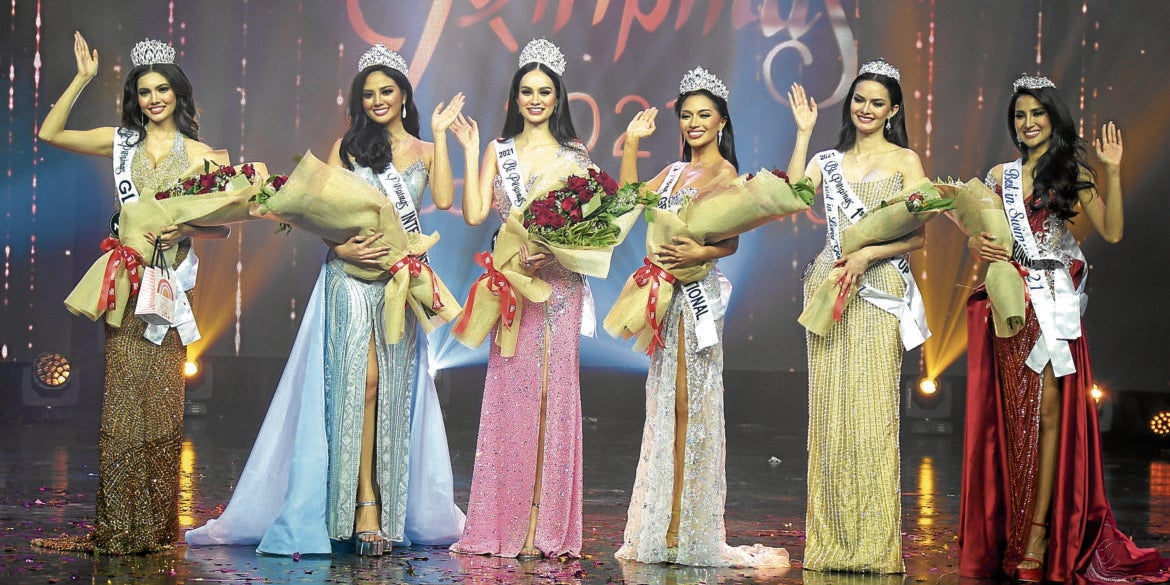 The Binibining Pilipinas pageant has just concluded what is arguably its longest competition season ever, thanks to the COVID-19 pandemic that pushed the coronation night schedule back by over a year. The longest-running beauty contest in the Philippines presented 40 candidates before the global health crisis erupted, but only 34 remained in the final competition on July 11.

It became anybody’s ball game when former runner-up Vickie Rushton, favored to take home the top title of Bb. Pilipinas International, “aged” out of the contest. Two-time runner-up Samantha Bernardo, another strong contender for one of the titles, also exited the competition to chase her dream of a global crown at the 2020 Miss Grand International pageant held in Thailand earlier this year.

Arnold was initially assigned the No. 21 when the pageant commenced in February last year. Back then, she felt it to be a good sign, not only because it was her favorite number, but also because 2017 Miss Universe Philippines Rachel Peters was Binibini 19, and 2018 Miss Universe Catriona Gray was Binibini 20.

But when the roster of aspirants shrank to 34, new numbers were assigned. Arnold got 17, the same number assignment of her two predecessors—2018 Miss International first runner-up Ahtisa Manalo and 2019 Miss International Top 8 finalist Bea Patricia Magtanong.

“It’s super crazy! It’s an honor to follow in their footsteps. They’re amazing and they both did well,” Arnold told Lifestyle in an online interview after their coronation.

The new queen also admitted to being superstitious herself.

Another interesting “coincidence” was Samantha Panlilio’s coronation as Bb. Pilipinas Grand International. The Caviteña is the third Samantha to represent the Philippines in the Bangkok-based global tilt in as many editions.

“I think it does mean something. I feel there is this pressure, but being named Samantha is an honor. I can’t wait to go and give a great performance,” Panlilio said.

Many considered Bb. Pilipinas Intercontinental Cinderella Faye Obeñita a “dark horse.” But she, too, had several coincidences that may have predicted her victory.

Even before inheriting her title from Emma Mary Tiglao, Obeñita already received a crown from her predecessor, who awarded her during the 2015 Miss Camiguin pageant. In 2019, fate once again played a trick when Tiglao sat as a judge in the Miss Cagayan de Oro contest where Obeñita also won.

“Gosh, I always think Emma is my lucky charm!” Obeñita said.She said she would want to bring her predecessor to Egypt where the Miss Intercontinental pageant will be held.

“Emma, perhaps you could also be a judge there,” she said in jest.

“I have always believed in destiny, and that coronation night was magical. I was wearing a blue gown, carrying the No. 12, and when they announced the winners, I think it was around 12 midnight,” Obeñita continued.

But as far as Bb. Pilipinas Globe Maureen Montagne’s case is concerned, there weren’t that many coincidences involved.

When Montagne entered the competition, she was only 26 years old and was eligible for all the titles at stake. But after spending two birthdays as a Binibining Pilipinas candidate, her chances of winning became slim because she had already exceeded the age limit for the Miss Grand International and Miss Intercontinental pageants.

With Arnold already “fated” to take the International crown, a formidable contender like Montagne had only the Globe crown to lose.

And the appearance of one of the global pageant’s top officials in the national pageant, even helping in bestowing her Binibining Pilipinas title, made Montagne “feel good.” The new queen even received a set of pearl jewelry from the Canada-based pageant official.

For the runners-up, receiving two of the most important special awards of the night may be seen as a sign of a guaranteed spot in the winners’ circle.

Fated or not, the 2021 Binibining Pilipinas queens swore to do their best in raising the country’s flag on the international stage, and to embody the ideals their crowns represent.