Sona dresses that can be worn more than once | Inquirer Lifestyle ❮ ❯ 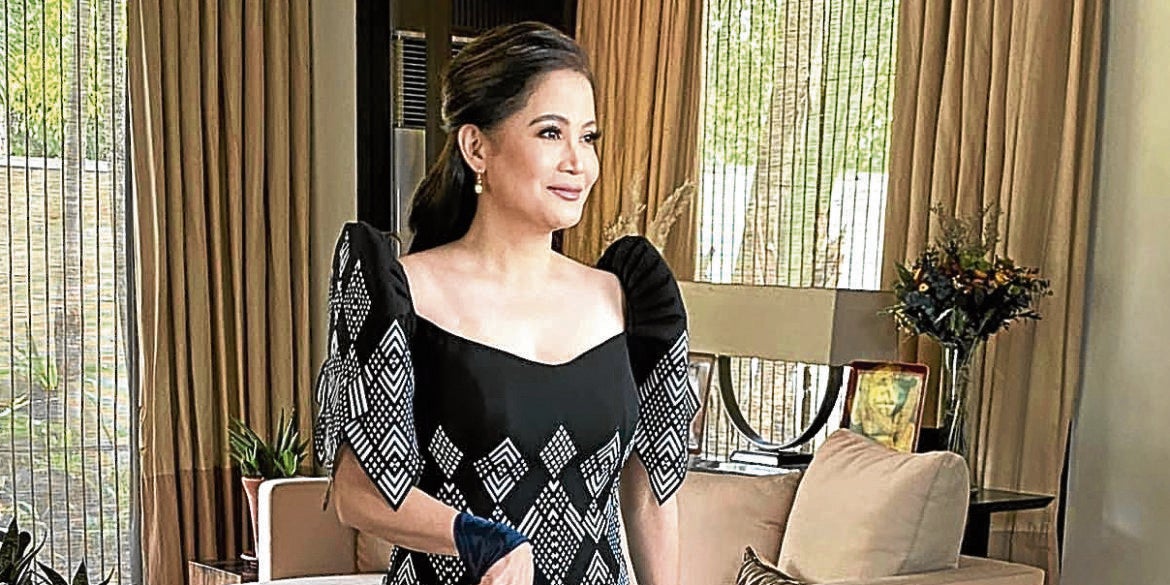 Sona dresses that can be worn more than once

‘Maybe they’re more conscious of what’s happening now and want what they wear to reflect that, as well’

Filipiniana was still the attire of choice at the President’s final State of the Nation Address (Sona) held Monday at the Batasang Pambansa.

The terno, with its distinct butterfly sleeves, was worn as tops paired with matching pants or in the traditional manner, as dresses accented with artful folds, beautiful embroidery or delicate beading.

For the past six years since President Duterte was elected, the Sona has taken on a more subdued air. It started in 2016 when a Palace spokesperson announced—mere days before his first Sona—that it would “not be a fashion show.”

Lawyer Paola Alvarez, then spokesperson of PDP-Laban, told Malacañang reporters that fashion would take a backseat so that the focus would be on the President’s message.

“It will be business attire but you have the option of wearing Filipiniana as long as, for the ladies, it will not be longer than knee-length,” Alvarez said then.

With very little time left to whip up a new dress for his client Heart Evangelista Escudero, one designer took out his scissors and deftly cut the hem of the long gown he had originally designed for her to wear.

“The announcement put everyone in a bind. Some clients opted not to wear the gowns they had planned on wearing, choosing instead something that followed the new dress code,” designer Ivarluski Aseron told Lifestyle.

“The easiest way for me to alter the white gown I made for Heart was to shorten the hem,” he said.

The newly hemmed dress harkened back to the version of the balintawak that became popular in the 1950s. Described in the book “Fashionable Filipinas: An Evolution of the Philippine National Dress” (Slim’s Legacy Project, Suyen Corp. Inc., 2015) as “a rustic version of the Philippine dress,” the balintawak was less restrictive but still modest. It consisted of “a camisa with butterfly sleeves, a saya worn with a simple tapis, and a soft alampay instead of a stiff pañuelo.”

The floor-length skirt inched upwards through the decades until it finally settled to just below the knee in the 1950s. This length made it sensible for afternoon events, unlike the long gowns that were more for evening.

“What they wore was very appropriate, as the Sona is an afternoon affair,” Gonzales told Lifestyle. “There were still some who chose to wear full-length gowns, though . . . parang awards night.”

“I had to tweak the sleeves a bit because they were too big for Em’s body frame,” said Aseron. “I ended up making a new set of sleeves.”

Cebu-based designer Cary Santiago created dresses worn by two of his clients, Tourism Secretary Bernadette Romulo-Puyat and Rep. Yedda Romualdez. The designer is known for his artistic flourishes with laser cuts and origami-like folds, but this year, he reined himself in.

For Romualdez, who attended the Sona virtually, he let the bright red fabric used for her terno stand out, suggesting only that she swipe on some red lipstick and tuck a cattleya into her chignon.

The diamond-patterned fabric he used for Puyat’s gown likewise required no other ornamentation save for some layering and a handkerchief hem that merely followed the diamond shape.

Both Romualdez’s and Puyat’s dresses were mid-calf-length and can conceivably be worn again in future events.

This timelessness is something to aspire for and one that Kaayo, the brand that champions indigenous woven fabrics, hopes more women will get behind. In the four years since Marga Nograles started the brand, this is only the first time she has personally designed dresses for three of her clients.

Instead of having new fabrics woven by the Mindanao artisans, she looked at the available stock and came up with dresses that paired Mikado silk with a ball skirt with T’boli beading, and a puff sleeve inabel top from Ilocos Sur with an A-line skirt from Marawi. The third dress was a knee-length terno with T’boli-inspired beading.Nograles only attended virtually but she wore an orange mixed print inaul terno with T’boli beading. The handmade fabric features designs handed down through generations.

“Watch me wear this dress over and over again in many ways,” she said in an Instagram post. INQ