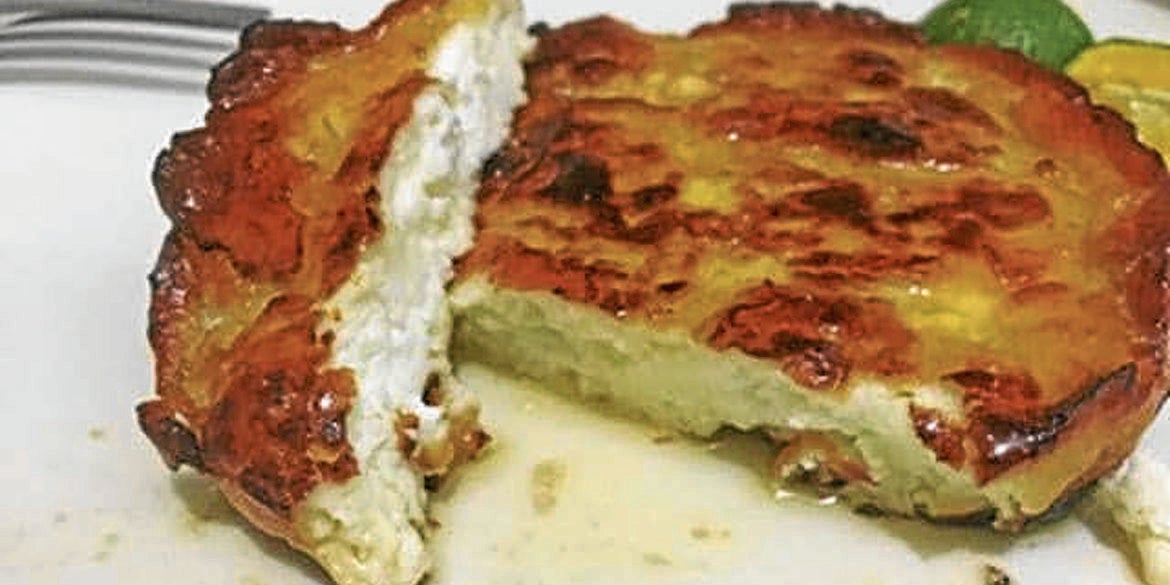 Chunks of golden, locally made halloumi cheese, speckled with chili oil and tossed among native tomato wedges and Thai basil leaves, made an eye-catching photograph on Facebook. The image was interesting as it was posted by Cultural Center of the Philippines artistic director Chris Millado.

Richard Pronove Cavosora, owner of water buffalo dairy company Happy Carabao, started promoting the halloumi cheese on Facebook in April. But it was only in the past few weeks that this Middle Eastern staple has been getting the buzz on social media, thanks to Millado.

A Middle Eastern delicacy, halloumi is a slightly firm and salty cheese, traditionally made from sheep or goat milk. It has been gaining recognition in the world for its versatility.

The cheese has a special characteristic of maintaining its form even when fried or grilled. The heat reduces the chewy texture while toning down the saltiness. It’s a popular substitute for meat in sandwiches, salads and barbecue skewers.

Cavosora branded his product Magdalloumi, a portmanteau of Magdalena town in Laguna and halloumi.

Cavosora worked as a community relations officer for a civil rights nongovernment organization in North America in the ’80s and also helped set up a mutual benefit association for the Philippine National Police with his father at the turn of the millennium.

He returned to the States and managed a health information network, funded by the federal government, for Asian American and Pacific Islanders.

In 2011, he decided to retire in Magdalena and look after his mother. For his livelihood, he ventured into planting and selling organic sweet corn. After the third planting, the yield was low. When he was ready to harvest, a typhoon ravaged the province, leaving him with a loss of P1.5 million.

The local agrarian office had seen him sell his corn at a food fair in SMX. People flocked to his booth to sample free uncooked corn.

During a “crisis,” he was sought by the municipal agriculture officer to help local farmers who had a sudden surplus of 400 liters of raw carabao milk. They were in a quandary about selling the excess. He contacted restaurateur Amy Besa, who recommended Jutes Templo, owner of Gino’s Brick Oven Pizza. Templo had lost his dairy supplier and he needed the milk for the mozzarella on his pizzas.

Selling surplus raw carabao milk didn’t guarantee financial stability for the farmers, though. “You need a product that would add value,” says Cavosora.

A classmate, who worked in Dubai, suggested making halloumi. Cavosora started innovating with carabao cheese instead of sheep or goat milk. When he was satisfied with the outcome, he introduced his halloumi in a Facebook post.

“Halloumi is not like those hard cheeses. It’s more like feta in brine,” he says. Carabao’s milk has more fat, thus lending a richer texture to the cheese.

His high school buddies enjoyed the halloumi when he served it as pulutan in a reunion. During lockdown in 2020, when most restaurants were closed and checkpoints made it difficult for travel, Cavosora was stuck with 900 liters of milk. He maintained his commitment to the dairy farmers by getting the milk and experimenting with different milk products. His trials with ghee and ice cream were too expensive to sell.

Last March, he revisited the halloumi after finding the ideal mold. “I used a regular tub which helped to make the cheese thicker and firmer in the cooking. The halloumi came out right,” he says.

“Magdalloumi is fat and creamy. People love it when it’s fried. I have experimented by searing it and putting it on black rice. Parang ulam (It’s like a viand). It’s a great meat alternative. People say it tastes like feta when eaten raw.”

The cheese maker has been collaborating with the Magdalena Agriculture Cooperative which does the toll manufacturing of Magdalloumi cheese at a processing center.

“Sixty liters of fresh carabao milk are consumed to make some 20 kilograms of Magdalloumi in a week. There’s room for growth. I am building a market by word of mouth,” says Cavosora.

Since Magdalena is known for kesong puti, Cavasora has likewise been producing it with carabao’s milk. The Philippine Carabao Center (PCC) modified Magdalena’s heritage kesong puti recipe which has now become the standard for his town.

“Our town’s version is served in a tub with whey. It becomes fresher. Kesong puti is basically cheese curd. You start off with the curd and process it further to make Magdalloumi,” he explains. “Carabao’s milk is double the fat content, which makes the cheeses tastier. Fat is the carrier of flavor.”

In the mid-2010s, Cavosora supplied kesong puti to Villa Escudero. Its former executive chef Cocoy Ventura likened it to fromage blanc (fresh cheese) which was topped with sampinit (local wild raspberry) and jams. Cavosora recently started supplying kesong puti to Chef Pablo’s Kantina, a restaurant run by a Spanish chef in Calaca, Batangas.Cavosora prefers to keep his production at an artisanal level. When farmers bring the freshly harvested carabao’s milk to the processing center, the milk is kept in the freezer. However, the milk for Magdalloumi is immediately cooked to make fresh cheese. The cheesemonger credits the carabao for being a catalyst for bayanihan. “The farmers, the PCC technicians, the drivers, riders and the consumers contribute to this spirit. That’s how I got to appreciate this enterprise. It takes a community to make this work,” says Cavosora. —CONTRIBUTED INQ