An adobo where the star is . . . beet | Inquirer Lifestyle ❮ ❯ 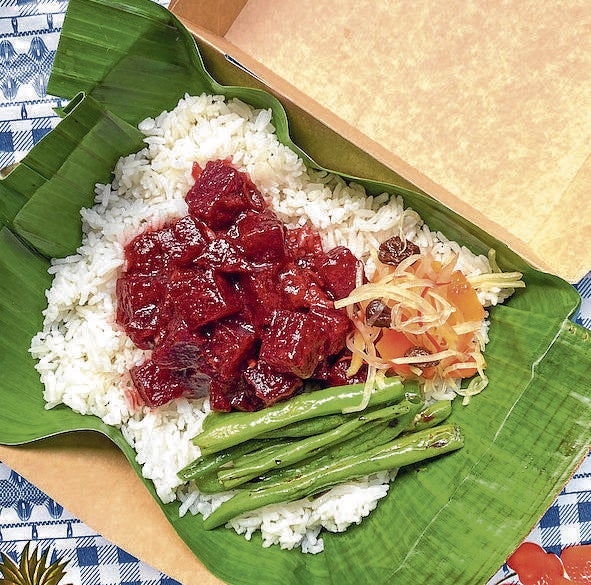 What started out earlier this year as an Instagram account of food pics has become a small-scale business where the only item sold is a “very veggie” burger.

Bea Ledesma, former publisher and executive vice president at Hinge Inquirer, had been posting pics of food she whipped up or that were prepared by her friends on A Home Kewk

In mid-July, she announced her first pop-up where followers could order the veggie burger, an egg sandwich or coconut granita. It was the ovo-lacto burger made with banana heart, malunggay, cashews and spices on a potato bun topped with malunggay ranch that found its fan base.

“I sell only on Saturdays, meaning it’s picked up on Saturdays, but people preorder throughout the week, and I average around 100-plus burgers on that day,” Ledesma said.

For this Saturday, she and chef Miko Calo of Metronome have collaborated on a boxed rice meal of adobo beets with coconut-lemongrass rice, homemade achara and Baguio beans. Calo said she had cooked pork belly adobo garnished with roasted beets for a pop-up dinner in Paris. The flavors went well together so she experimented by slow cooking beets in adobo sauce with roasted onions and garlic.

“I always get requests for vegan dishes,” Ledesma told Lifestyle. “There’s a large vegan community in Manila and a growing number of people who are interested in reducing their meat intake due to reasons involving health, climate change or evolving tastes.

“I think the notion that meat should be the center of the meal is a little old-fashioned. Plant-based food is the future—and clearly very much of the moment,” she added.

When she describes her veggie burger, she doesn’t resort to the obvious, “it tastes like meat.” Instead she says it’s a veggie burger that’s just “trying to be a tasty veggie burger.”

Ledesma and Calo are childhood friends and have been hanging out since they were teens. They have a shorthand when they communicate and know each other’s preferences.

Ledesma is a fan of beets. “A little earthy, a little sweet and—when you’re prepping them—they actually bleed so you feel like you’re not missing out on the meat,” she said in a statement.

“I’ve been eating Bea’s cooking for years and I became one of her guinea pigs when she started developing her veggie burger. So when we got to talking about doing a collaboration, I was all for it. For me, it’s something different from what I normally do and create, so it’s a refreshing change,” Calo told Lifestyle.

For their collaboration available only on Aug. 28, Calo wanted to highlight the basic flavor combination of an adobo with the fragrant aroma of cooked coconut milk and lemongrass. “Growing up in Mindanao, we used to add lemongrass when cooking rice,” she said.

Ledesma is set to introduce another sandwich by September, and is working on another hoagie-type vegetable sandwich.