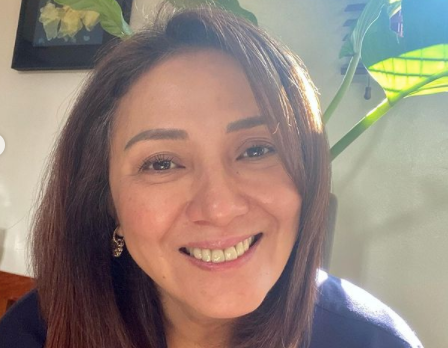 As a seasoned performer, Cherry Pie Picache knows that one of the secrets to longevity in show business is to love one’s craft. She therefore has a few words of wisdom to young actors.

(To kids today, just like when I was starting, as I’ve said, I am old school, so I learned a lot from those I look up to, those I respect, and actors that I idolize before.)

Picache plays Elvie, one of Janine Gutierrez’s godmothers in the TV series, which will premiere on Sept. 11 on the iWantTFC app and site; and on Sept. 13 on Kapamilya Channel, Kapamilya Online Live, A2Z and TV5. Viewers outside the Philippines can catch it on The Filipino Channel and IPTV.

Picache hopes that young stars don’t get offended when she shares with them what she learned in the past.

“I hope that they take it positively na marami kayong matututunan sa lahat ng katrabaho ninyo (that you will learn many things from your co-workers). I hope that you take it into your heart,” she said. “Seryosohin [ang] craft (Take craft seriously) before anything else because that will entail your longevity in the industry.”

Some of the things she learned from actors who came ahead of her were respect and discipline, while noting that most of the young actors she’s worked with are disciplined and respectful.

Picache is also asking young actors not to take for granted the breaks and opportunities that come their way, which she noticed as being more abundant now compared with her days when she was still starting out.

(Sometimes, you know, the opportunity and chance are given to you. It’s there right away, unlike with us before, where we have to work very hard for us to be given a chance to be in a scene in a movie or television.)