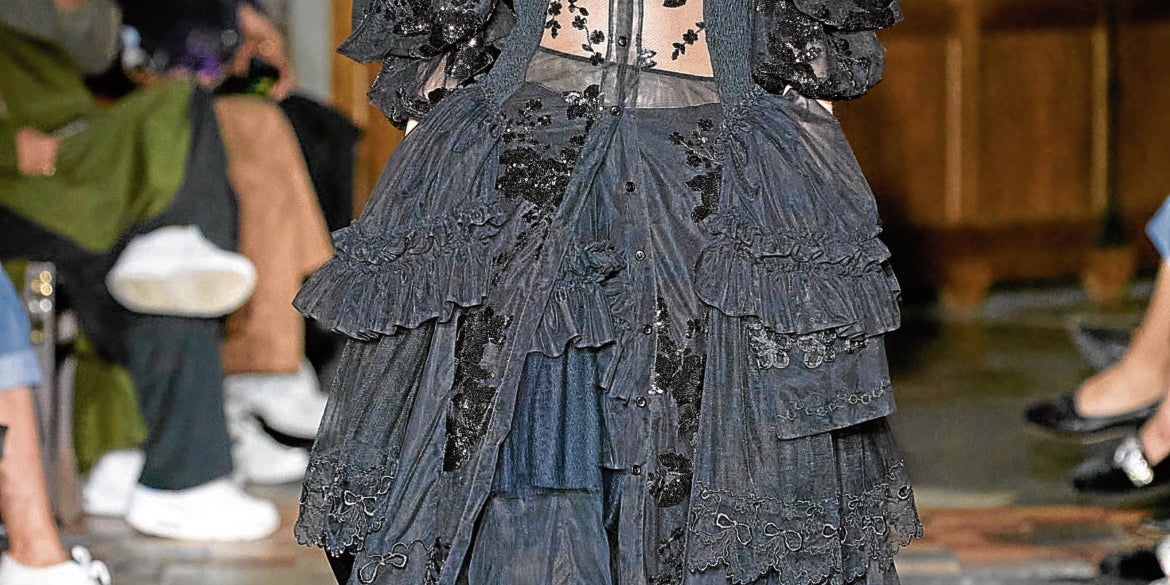 Simone Rocha plays with the idea of christening wear.

Deep run the rivers of woman’s capabilities and thoughts. This was clear in light of London Fashion Week, as Spring/Summer 2022 collections took over. Most of these shows were the first since 2020, and continued to herald signs that we are moving beyond our current situations.

Similar to New York Fashion Week, London’s runways heralded new beginnings. It was not lavish or boisterous. Rather, it was a sensible, measured declaration partnered with what we’ve learned as we stayed at home.

Take for example Erdem, whose 15th-anniversary collection was inspired by his new house at Bedford Square. He envisioned the life of his would-be neighbors had he been in town a few decades back, poet Edith Sitwell and artist Ottoline Morrell. “I was really fascinated with these two women—both six footers—who knew each other, and donated to the British Museum,” he told Vogue.

The collection was made up of delicate lace, but given that 21st-century twist. Wide-brimmed hats that matched with dresses spoke of afternoon tea, but also allowed you to have fun in your dress. A sparkly, tiered neon gown had a traditional silhouette, but with an updated palette and mindset.

Simone Rocha and Molly Goddard made their collections with their newborn children in mind.

Rocha played with ​​christening shawls, voluminous skirts, satin ribbons and pearls to evoke the purity of new life. She also added the fascination of touch, especially poignant as we’ve learned to keep our distance.

“I wanted there to be a lot of texture because it’s an in-person show, and everyone will be quite close to the garments for the first time,” Rocha told Vogue.

“I was looking a lot into the way children interpret and wear clothes, but then also birth, the ceremony of christening and communion gowns. And baby pointelle knits, the ribbon threaded through the eyelets. And mohair baby cardigans.”

Goddard, on the other hand, added to her love for blowing up the childhood dresses she had as she thought about baby clothes for the season. With that love for girly flourishes, she went for smocked dresses over pants, and delicate ruffled dresses paired with relaxed orange knitwear.

Big winner of the year Nensi Dojaka followed up her LVMH Prize with her first solo show. She brought forth her signature formula on how to reveal a woman’s body and how to play with its curves with cropped styles, hosiery and peek-a-boo details in unlikely places. It was not about sex per se, but sexuality. It was about celebrating the body

At Richard Malone, it was about creating something out of almost nothing. Scrap leather and fragments of various materials played crucially in the collection. Draping was involved, along with unlikely cutouts and window dressing for that big statement.