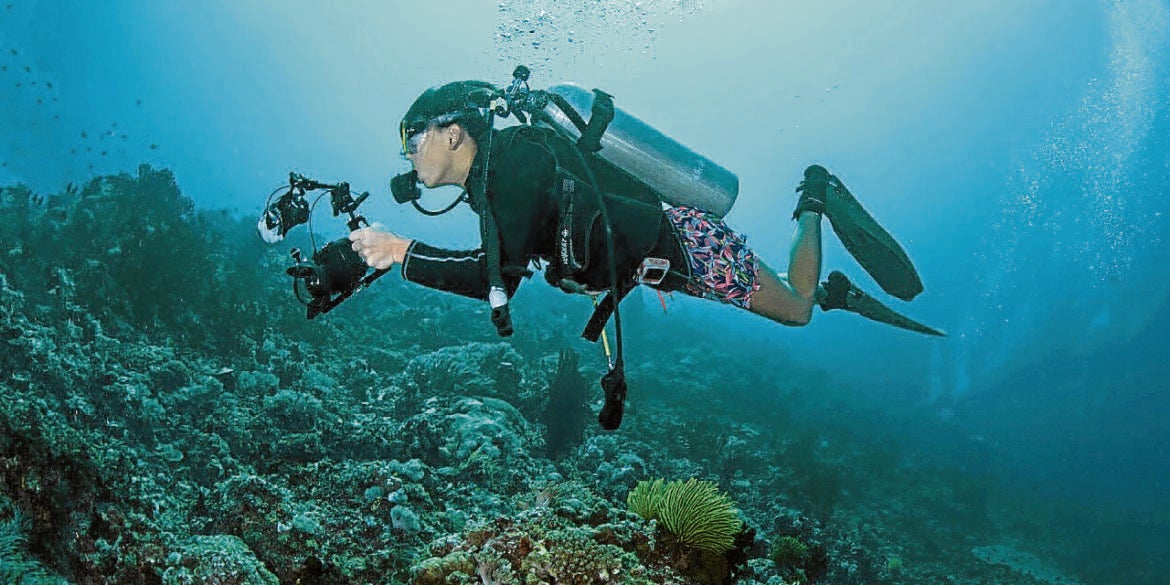 Ganden Medved Po during one of his dives

With the worsening climate crisis in the Philippines, more and more local youth are stepping up and doing their part to save the environment. For Ganden Medved Po, 17, his contribution is “Life Below Water,” his newly released ocean photography book.

Ganden is the son of Nanette Medved-Po, former actress and founder/chairperson of Hope and Plastic Credit Exchange, and Christopher Po, chairperson of Century Pacific Food Inc.

Ganden is making a name for himself, as he has been a part of the World Wide Fund for Nature (WWF) National Youth Council since July and is a staunch advocate for marine conservation. It was his love for the ocean that made him want to contribute to this cause.

“The ‘Life Below Water’ book means a lot to me because it merges my two passions: photography and the ocean. I was raised around the water. I developed an interest in the ocean and the animals that inhabited the area,” Ganden said. “Photography has always been a part of my life, and captivated my heart almost equally as much as the ocean did.”

Highlighting the beauty of Philippine oceans, the contents of “Life Below Water” range from topside photos to wreck dive shots, featuring the vibrant marine life and seascapes that lurk below. The book does not only bring awareness to the worsening state of Philippine oceans—its proceeds will be donated to the development of WWF-Philippines’ sustainable fisheries work and their partner fishing communities in Bicol, which had suffered in the pandemic and recent typhoons.

Ganden started his photography journey at 10 years old by taking photos during vacations and celebrations. He realized that he had the power to preserve memories and share what he saw to the world.

As he grew older and learned more about the effects of climate change and unethical practices to marine life, he decided to combine both his skill and advocacy. Under the mentorship of Scott “Gutsy” Tuason, renowned underwater photographer, and with the help of WWF-Philippines, the book was underway.

“I was determined, even in the smallest of ways, to use my passion to help the world,” Ganden said.

Ganden first met Tuason when he was 13 years old and sought to start underwater photography. Medved-Po then brought her son to Tuason’s shop, Squires Bingham Sports, to buy the proper camera and gear, and the rest is history.

“I don’t get a lot of people at the shop his age looking for underwater cameras, so it was really quite refreshing to have Ganden come over with his mom,” Tuason said. “He was very serious about his photography, and of course, the guy’s got talent.” He added that Ganden is extremely motivated and committed to his craft, even waking up earlier than Tuason to prepare his gear.

Katherine P. Custodio, WWF-Philippines executive director, also praised Ganden for his initiative and interest in marine conservation. “A healthy ocean means all life in it, and all that depend on it, will have a better chance of bouncing back from the impacts of climate change. Ocean protection is a matter of survival for a country like ours,” Custodio said.

“‘Life Below Water’ is a young person’s experience of the ocean, expressed through his chosen art of photography. It is a reminder of why, what, how and for whom we do our work of protecting the oceans.”

Custodio added that Ganden’s book gives her hope that young people are doing what they can to change the world for the better, in their own small ways. “You are showing us how the power of one can create positive action in many.”

Ganden expressed his gratitude for his parents for always being supportive of his passions and introducing him to Tuason, who helped nurture his talent.

When asked what inspired him to start “Life Below Water,” Ganden explained that he wanted to try and help his community the best he could. “Being around the ocean for most my life, I feel a deep connection to [marine life]. They’re kind of like my second family, and in any way I can, I want to help the ocean and help the people that benefit from the ocean.”

Ganden is a senior at International School Manila but his journey as an underwater photographer and author has only begun. By launching “Life Below Water,” he has shown the world that no matter how young you are, you can always take that step to change the world for the better. —CONTRIBUTED