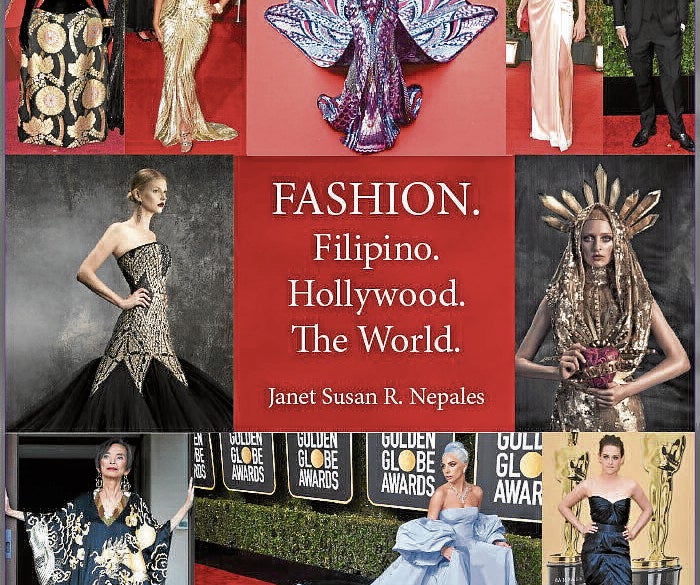 “The Filipino designers who have made it not only in the Philippines but also on the international fashion stage have unique artistry, distinct craftsmanship and creativity that are very Filipino,” according to Hollywood correspondent Janet Susan R. Nepales.

These qualities, plus their incredible attention to detail and the individuality of their creations, make these homegrown talents sought after here and abroad, the Filipino American journalist said.

In her debut book, “Fashion. Filipino. Hollywood. The World.,” Nepales, a fixture on the red carpet scene, archives the genius of Filipino designers whose works have been showcased on entertainment’s biggest events. Household names like Michael Cinco, Oliver Tolentino, Furne One Amato and other Filipino designers, in this coffee-table book, trace their roots and discuss how being Filipino played a role in their chosen career.

It’s part fashion tribute, part compilation of Nepales’ illustrious career in Hollywood reporting. Snippets of her previous interviews with A-listers are also printed alongside their photos.

“I highlighted some of my favorite quotes to reflect the humanity behind these celebrities who are, behind their couture clothes, simple people like us who worry about their children, jobs or careers, love lives and other things we also worry about in life,” she told Lifestyle in an email interview.

Nepales’ fashion book includes stunning photos from the red carpet, editorial shoots and magazine covers and spreads. Most of the red carpet photos are shot by Hollywood photographer Sthanlee Mirador.

The book features a foreword from former Inquirer Lifestyle editor Thelma Sioson San Juan. “I say this as I look at the pictures of red carpet drop-dead designs by Filipino designers on these pages. The art of resilience (e.g. improvisation) is the fertile ground that gives rise to today’s Filipino design talent in the Philippines and abroad. Given the marriage of adaptability and sheer talent, the Filipino designer has every right to take his place at the global feast,” she wrote.

San Juan explained that despite the insufficiency of raw materials in the country, local designers have learned to improvise and come up with show-stopping looks.

“Yet, even as they complain, they create, and how,” San Juan added. “So today, their creations are on the red carpet, and this book is the most significant tribute to them.”

The pages of this star-studded fashion book offer a glimpse into Filipino sartorial elegance and the creatives who have made it in the cutthroat fashion scene. Dubai-based designer Cinco, best known for his extravagant gowns, is among the 15 designers in the book.

The Samar-born couturier may have dressed music legends Lady Gaga, Beyoncé, actor Sofia Vergara and other Hollywood glitterati, but he places emphasis on the importance of honoring tradition.

On writing “Fashion. Filipino. Hollywood. The World.,” Nepales noted that the designers in the book proudly incorporate Filipino artisanship, from indigenous weaves like t’nalak, to beading and embroidery. Others also make use of banig and solihiya weave.

“I have learned that they are all proud of their Filipino heritage and are determined to promote indigenous materials and fabrics. They use materials like the jusi, piña and abaca for their gowns, suits, tuxedos or dresses,” she said.

Nepales is not just an observer of Filipino talent on the red carpet. The Quezon City native Hollywood insider has been covering the biggest nights in entertainment dressed in Filipino couture. Her photos wearing gowns by Alan del Rosario, Puey Quiñones and Carlyn Nuyda-Calloway are also printed on the pages.

The team behind the book are also no strangers to the industry. Filipino-American photographer Mirador is the only Los Angeles-based photographer for New York’s Sipa USA photo agency. Nepales’ husband and fellow correspondent, Ruben Nepales, edited the book.

“It is a joy to work with someone you can trust and you know can deliver excellent work. Plus, he is always available to me . . . without complaints,” she added.

Model, actor and now publisher Bessie Badilla also did the book’s layout and design. She was the one who came up with the idea of compiling Nepales’ red carpet looks into a book. The idea evolved to include Filipino designers and Hollywood stars.

Still, at the heart of the visual record are the Filipino designers. Nepales wrote: “This book is my shoutout to all the designers in the Philippines and the world—the masters, many of whom we have sadly lost, the current geniuses, the rising talents and the next generation.”

Nepales sees a future with more Filipino creators entering the international fashion scene—the spectacular showcase of evening gowns during local beauty contests is just one proof of the talent of emerging designers.

“Sometimes, I am at a film festival abroad and just admiring the red carpet scene and I discover that a gown that I like was made by a Filipino designer. The talent is obviously there. We just need to discover and promote them to the world.”