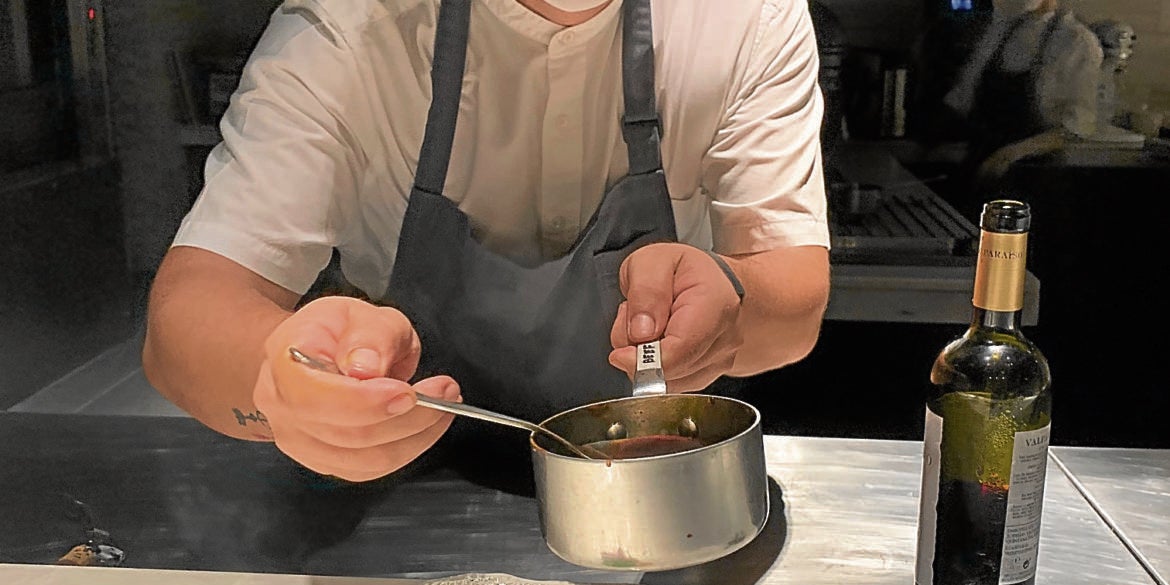 Getting intimate with Boutwood as he not only cooks for you, but also shares his life in the process.

Helm is back in kitchen action, with chef Josh Boutwood releasing his most personal menu to date. The fine-dining restaurant started accepting reservations last week and serving customers last Sunday. As of writing, it is already fully booked until the end of the month.

Not only was the clamor driven by anticipation to sample the thematic degustation of the Filipino-British Boutwood, named La Liste’s Young Talent of the Year 2021 earlier this year, but also by curiosity over a dining experience worthy of the 50 Best Discovery List recognition handed out by the organizers of Asia’s 50 Best Restaurants just last month.

The 10-seater Bonifacio Global City joint was the only Philippine-based restaurant in this year’s elusive list. As written on theworlds50best.com, “Helm offers serious gastronomes an unmissable chance to watch one of Asia’s most exciting young chefs create culinary magic.”

It’s an acknowledgment that was a long time coming for this young chef. With his impressive caliber of cooking, he was definitely bound to be celebrated. The small wins for both the restaurant and the chef this year were definitely rewarding and much sweeter given the pandemic, when they were more focused on surviving than being out to impress.

“I was elated because we’ve put so much heart and soul in cooking, and to get that little bit of recognition was enough to fuel me and keep me going.”

Helm has consistently had some of the most inspired and spirited menus in the metro. Boutwood has served a monochromatic meal where each dish had a dominant color in varying hues, and another where he based the food on the country’s history and foreign influences. For the last quarter of the year, he has put into plates his most personal theme yet, taking inspiration from the story he knows the most—his own.

A life in a few bites

“It is hard to portray an upbringing and a lifestyle in a few bites of food,” he says. But in his case, surprisingly, it came organically, with the story presenting itself in the process of creating the menu. “It wasn’t planned. Things just fell into place. It unconsciously happened.”

The 12 courses represent fond memories of his life and career. (Beware: spoilers ahead!)

It started with his take on the classic Fish and Chips, a treat come Friday night, he says. “It wasn’t often we would order food from outside. The chips are still the memory spark.”

He reinvented tradition and plated a wedge of golden potato pave, 100 thin layers of potato sprinkled with cheese and cooked with beef tallow, then crowned with a glistening sheet of cured trout, capers and shallots, finished with a dusting of sea buckthorn powder.

It was followed by beautiful plates showcasing Cumberland sausage, Saint-Nectaire cheese from France, and squid with a coconut cream and crab fat sauce.

Come the seventh course, the flavors became heavier and more robust as the remaining savory bites immortalized Boutwood’s turning point as a culinarian. “That transition is a large stepping stone in my career.”

There was sea bass on a mound of Jerusalem artichoke puree, fork-tender short rib with pineapple and pork belly cooked in Shaoxing wine.

“The pork dish was inspired by the moment I realized how large our Chinese Filipino communities are. Growing up in Europe and on an island, I was shielded from really understanding how much cultural influence there was.”

Capping off the meal was a donut, which perfectly symbolized Boutwood’s nationalities, English and Filipino. “The rhubarb (as the filling) is such a treat in the summer. Then carabao milk (as an ice cream), because I have strong memories of seeing them in Boracay as a kid going up and down the beach.”

The multiawarded chef will be more accessible (he has Savage and Test Kitchen already) and will show off more of his chops as he prepares two new food concepts that will open by the year’s end. The first is Ember in Greenbelt 3, where he will be offering a refined repertoire of dishes cooked in an open fire. The other is Dandylion at the Ayala Triangle Gardens, which will serve small plates and cocktails.

Helm is at Arya Residences Tower 2, G/F, McKinley Pkwy, Taguig; tel. 0915-9098647, [email protected] It is open from Wednesday to Sunday, lunch (by request) and dinner, single seating only.