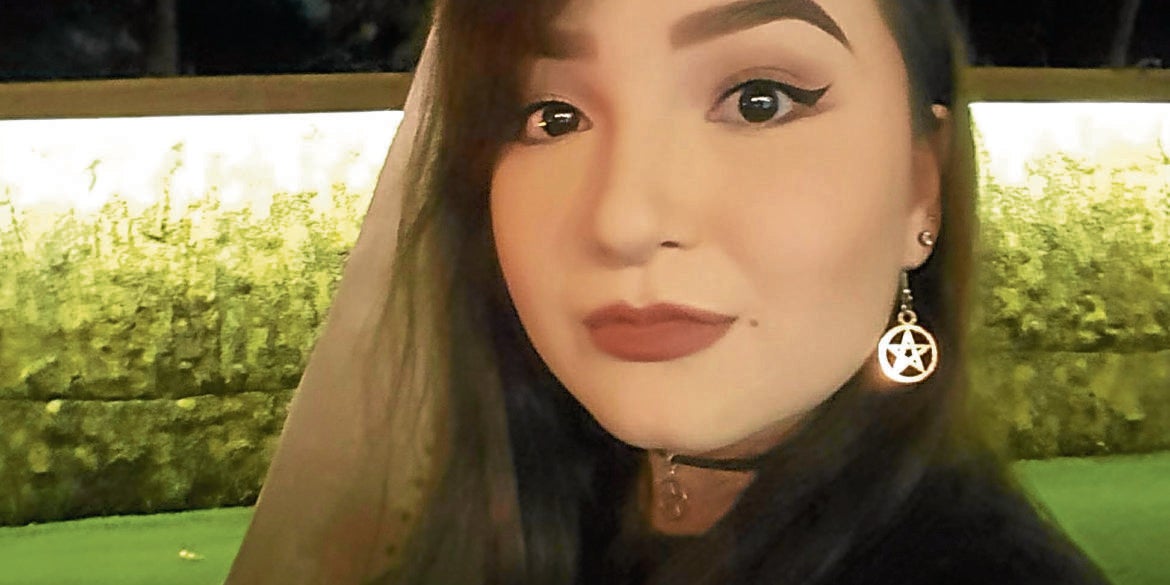 I met a witch on Facebook—and she also does TikTok

What can you say to a witch you found on Facebook? That you were drawn to her because she politely explained on a Facebook page that not all witches are Wiccan? Or that despite her terrifying profile picture, she seems like someone who wouldn’t hex you for asking what could be deemed an “offensive” question?

Wicca is a religion where followers practice witchcraft and worship nature. One can be a witch and have a different religious belief. It is one that Cat J (@onyx_hydrangea on Instagram) patiently explains to those who want to give witchcraft a try. (She declined to have her full name printed. Her mom is open-minded about her being a witch, but her relatives are against it.)

Cat J started practicing witchcraft when she was just 11, when she was introduced to a website by a schoolmate. But she became aware that she could see other things that no else could since she was 6 years old.

“I didn’t really feel different. I was just aware I could see extra things,” she said. Her third eye has been open since she was young. “Not all witches have their third eye open.”

She goes on to say that there are other sixth senses or clair senses. Her nature is to be a clairsentient and claircognizant.

Clairsentience means having clear feelings. Clairsentients are aware of feelings other than their own. It includes awareness of the emotional energy of spirits. Claircognizance means clear knowing. It refers to suddenly knowing something, like a premonition.

She grew up seeing duwende or shriveled, tiny people. They had them in her home and they came in and out, she said.

“I can talk to duwende and other entities, in general, but it’s not always clear. They are aware that I see them but it’s a very respectful interaction. Elementals are not to be messed with,” she said.

Cat J’s Instagram account is very normal. She posts photos of her food, her travels and occasionally, an outfit of the day. Her clothes are always black, a style she deliberately chose to appear witch-like.

The 28-year-old holds a job in a business process outsourcing company. She is a solitary witch, which means she doesn’t belong in any coven. She watches K-dramas like “Hotel del Luna” and “Kingdom” but hates horror movies. “Ju-on (The Grudge)” traumatized her so much that she sleeps with her blanket tucked under the mattress. She’s also vaccinated.

Cat offers tarot reading, aura reading and occult consultation services. She posts about them on her Instagram and Facebook accounts.

Her TikTok (@onyxhydrangea) is the most interesting. She uses the platform to tell of her personal encounters with otherworldly creatures. This includes the time she saw shadow people for the very first time, and the time she saw a pair of eyes under her dead father’s bed. She’s a wonderful storyteller.

Interestingly, Cat has a demon companion. It’s one she accidentally summoned four years ago.

“Her demonic name is something that cannot be pronounced by humans. But the name she gave me to call her is Xhanshee (zan-shee),” she said. The demon is someone she has a contract with. Part of that contract includes that her demon must protect her from anything conceived as a threat.

“Many witches have different companions, mine just happens to be a demon,” she said. Cat J describes her demon as a mix of a girl, snake and dragon. “She started off looking different, but evolved a bit during our time together.”

She sent a picture of the demon she drew. This writer commented that the demon looks attractive. They’re vain, we were told.

In some literature, witches are called the keepers of demons. It is a notion that Cat strongly opposes. She said that demons are their own keepers. People who work with them need to be strong and respectful. They also have to do research.

Demon work is part of her religion, she says. One of the deities she follows is Lucifer. Cat J is a pagan who follows old gods.

“I honor and work with Mother Earth, Cernunnos, Lucifer, Loki, Arianrhod and Hecate,” she said. The first two teach her to focus on inner peace and respect for herself and Earth.

Lucifer and Loki teach her to be strong and resilient, to gain a backbone and stand up for herself and others.

She no longer works with Arianrhod, but she helped with her intuition and divination. Hecate gives her general lessons on witchcraft.

Lucifer is often associated with evil. Does that mean she is, too?

“Lucifer is originally a Roman god of the morning star. To those who work with him, even in his demonic aspect, he is known as the Light Bearer. That’s exactly what his name means. He spreads wisdom through his light. And if people think I’m bad because of their lack of knowledge about him and because of their very Christo-Abrahamic views, that’s their issue, not mine,” she said.

Her witchcraft leans toward Western knowledge, but she said that she is working on learning about Filipino witchcraft, too.

“It’s a way of molding your reality to help yourself, from simple protection to more complex healing,” she said. She calls those who believe that witches are automatically evil as fearmongers.

“Witchcraft, for the most part, is of the Earth and the Self. It’s inherently neutral, and the person’s intent is what makes it bad or good. Many witches don’t believe in light or dark magic because it’s always neutral until our intention changes it,” she said.

The practice is something that can be used alongside anything, including healing. She added that traditional healing methods and rituals are general witchcraft.

“The Craft of the wise is used to create change,” she said.

When we asked if she kills animals for her rituals, she laughed. “It’s a common question. No, I don’t. Most witches don’t. At most, if we need an animal ‘sacrifice’ for a ritual, we might kill a chicken to make barbecue. We then offer some of the barbecue to our deities. But nothing like in the movies,” she said.

Cat J says that the movie “The Craft” is the most accurate Hollywood portrayal of the practice, while “Harry Potter” is purely fictional.

Finally, we asked if she makes love spells or potions.

“Mostly protective spells and banishings. Sometimes a love blessing, yes,” she said. Proudly, she said that her spells have a great success rate. But she never makes something that will force anyone to love another.

“I, and many witches, believe that love spells like that are one of the evil spells. We don’t mess with free will,” she said.

If you tell her that you believe that everything she just told us is the product of an overactive imagination, then she would probably tell you that she doesn’t care.