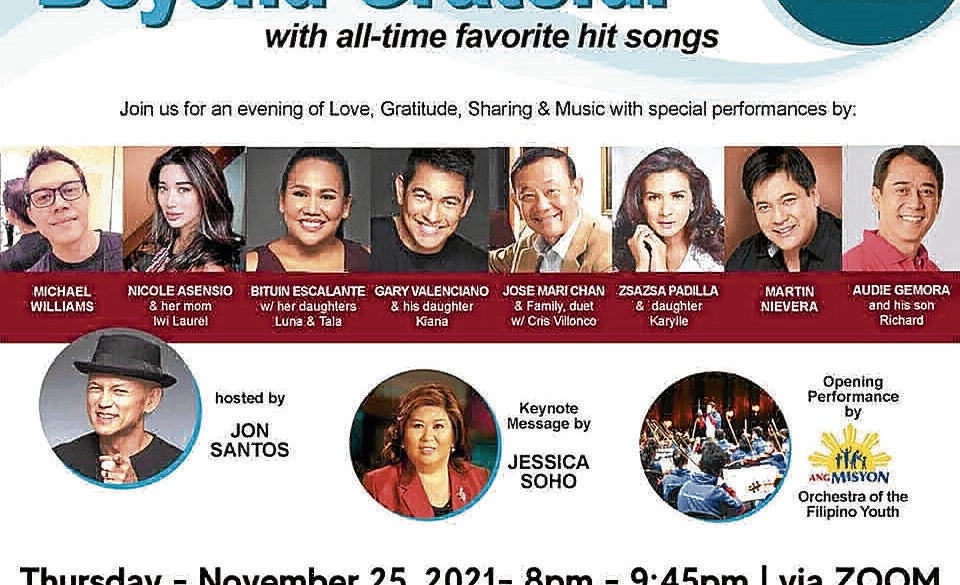 Santos is friends with Jeannie Goulbourn, the woman behind NGF Mindstrong. Goulbourn, a fashion designer, started the foundation after she lost her beloved daughter Natasha to suicide in 2002.

But when she and Santos first met, it was fashion they bonded over and not her advocacy. Santos recalled that it was Williams who introduced him to Goulbourn.

“I was happy to finally meet her and put a face to the fashion label I loved. Ms Goulbourn’s Silk Cocoon barongs have saved many formal wear emergency situations [for me],” Santos told Lifestyle. He’s worn Goulbourn’s creations for awards nights and Silk Cocoon has been his go-to whenever he has “biglaan hosting gigs.”

The two soon became friends. “We discovered our common friends, interests and pursuits. She has also seen a couple of shows I was in. Aside from my interest in East-meets-West fashion and her interest in the performing arts, we realized we were both eternal students, always curious about puzzles of the soul, and aware of how elusive emotional wellness can be. My admiration for Jeannie deepened when I learned about her advocacy NGF Mindstrong and Hopeline.”

“I was in awe of her commitment to promoting mental health, and of the way she leads by example. I cannot say she is tireless because I have seen her tired, but her drive and devotion to the work is really admirable,” he added.

Santos has since been part of NGF Mindstrong’s fundraising projects.

“Before the pandemic, I was in the cast of one of her fundraising concerts. It was the second installment of the ‘Beyond the Blues’ series at the New World Hotel, the home of Silk Cocoon, where we hope to stage more live shows again.”

But for now, they’re holding their show online. “Beyond Grateful” will feature all-time favorite hit songs.

Santos said, “We hope to bring to the audience a night of bonding with their favorite OPM and musical theater artists, kahit online muna, bonding through heartfelt sharing and heartfelt singing and songs that uplift and heal.”

Santos is very excited about their lineup of talent. “We were very happy to hear resounding yeses from the singers we invited and even happier and humbled to know they were willing to go with the two-generation concept.”

Asked what he’s looking forward to the most in the show, Santos said, “Can I go back to fanboy mode and say the Martin Nievera segment!? I miss hearing the voice of Mr. Concert King!”

The show, which promises to be an evening of love, gratitude, sharing and music, will also feature a message from Jessica Soho and a performance by Orchestra of the Filipino Youth.

Attendees are encouraged to give a love donation of P800. NGF Mindstrong is trying to raise P2.4 million for Hopeline’s system upgrade and so they can get additional responders, something much needed during the pandemic, when calls to the hotline have multiplied.

Santos said, “I am always grateful for opportunities to see big hearts coming together for a worthy cause.”