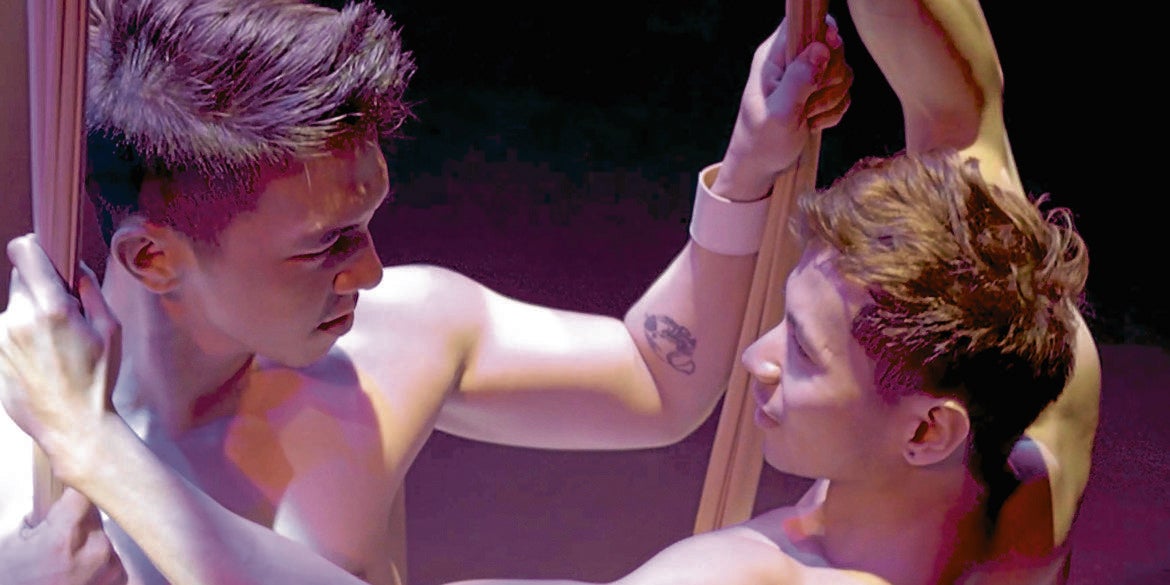 There was a strong energy that resonated from the screen while watching the online premiere of the advocacy play “Under My Skin.” Perhaps it’s the actors’ hunger to perform again onstage, or the time-limit rush, since they shot it in January under very strict quarantine protocols.

“We had only 12 hours to do everything!” director Melvin Lee said during the launch. “But there are advantages of shooting a play such as retakes and adjustments in lighting and blocking.”

Written by Rody Vera, “Under My Skin” was Philippine Educational Theater Association’s (Peta) last live show in 2020 before the pandemic hit, and it’s the company’s first play made for streaming. It will run Nov. 26 to Nov. 28 and Nov. 30 to Dec. 5 on ticket2me.net. Tickets are sold at P180 for a one-time livestream and P250 for video-on-demand streaming (tel. 0917-5391112; bit.ly/undermyskinonline).

The anthology drama tells the interconnected stories of people living with HIV, or the human immunodeficiency virus, that, when left untreated, can lead to the dreaded AIDS, or acquired immunodeficiency syndrome.

The heart of the story is an epidemiologist, Dr. Gemma Almonte, brilliantly played by Cherry Pie Picache who represents the struggles and pain, and restraint that health-care workers should have in battling AIDS.

At its core, “Under My Skin” is an education campaign that having HIV is not a “gay disease” or a death sentence. It presents facts and figures about HIV in the Philippines with urgency but with heart and humor. It shows where and when to get tested, employment rights, what to do when one tests positive and how to be around pozzies or pusit—monickers for people living with HIV. It highlights condom use and warns about “bug chasers” or people who eroticize HIV infection and refuse to use protection.

A movie and TV actress, Picache is used to working with cameras, but admitted it was a challenge to do a play without a live audience. “I wanted to give the people watching at home the feeling of watching it live, even if they are watching online,” she said.

Lee achieved this intimacy by using a multiple-camera setup.

“We shot the play in sequence with three cameras: two for close up and a wide one to see the whole stage,” the director said. The tight shots allowed the viewers to see the actors’ faces up close and focus on the nuances—a streaming achievement since, even with front-row theater seats, one can’t be that close. The details of the aerial silk act choreographed by Nicole Primero and ​​​​​Carlos Deriada Jr., and some animated effects added color to the narrative.

The recent “Under My Skin” watch party was a casual get-together among the Peta team, members of the media, representatives from The Red Whistle, LoveYourself and Unilab organizations. It was also the first time the cast saw the film in full.

I’ve seen the play live onstage but watching “Under My Skin” from home hits differently. It was more poignant, and watching a show about an epidemic during the pandemic has more meaning to me now. It’s a given that “Under My Skin” is about a disease with no cure, but consider this review a trigger warning for any audience who has a personal experience with or knows someone dealing with HIV, trauma and abuse.

After the streaming, there was a virtual talkback, similar to the ones held in person with doctors and counselors at Peta, to address questions from the audience. Vera said he intentionally made the characters in the play supportive, because we are already dealing with prejudiced parents and friends in real life.

As Dr. Gemma said, by now, no one should be dying of AIDS anymore. HIV can be managed, but not the deadly combination of panic, fear and ignorance: “The real virus is intolerance.”

And there’s also the factor of self-stigmatization that should be addressed, because as the play explained, most treatments are free and help is available—one just has to ask.

Dr. Gemma said AIDS cases in the Philippines are projected to increase in the next five years, and like her, my wish is “that when the dark times come, we can be a source of light.” “Under My Skin” online successfully brings the AIDS narrative into Filipino homes—still a must-watch, even if only virtually.