‘Functional aging’ or how to delay the aging process | Inquirer Lifestyle ❮ ❯ 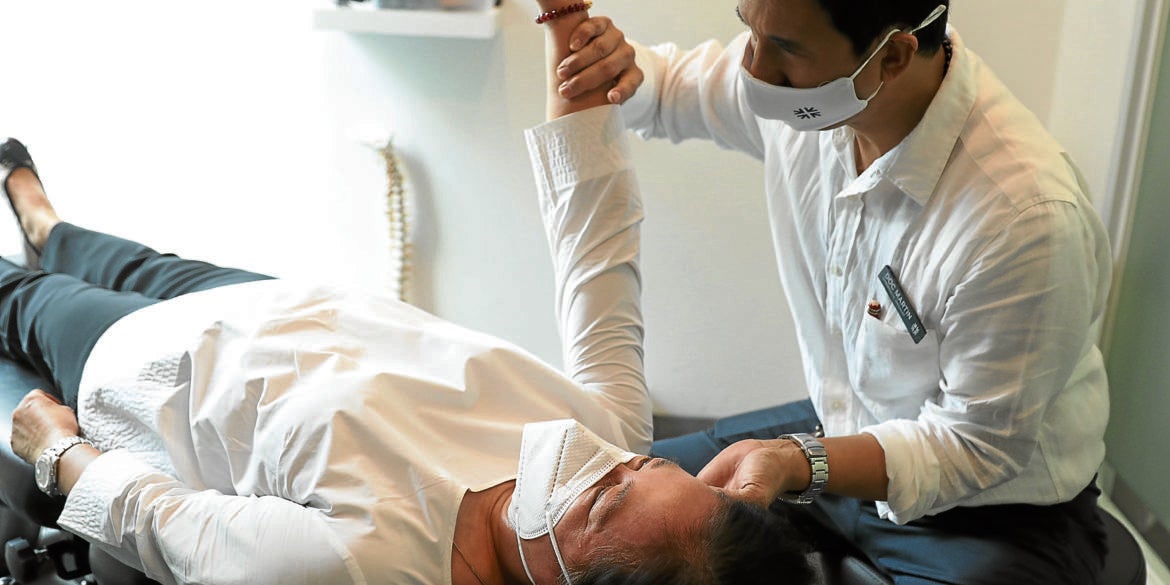 Camara performs a functional muscle test on patient Ray Dempsey by feeling the tension in his back, and how it responds to the stress of having the arm pushed down.

‘Functional aging’ or how to delay the aging process

They were a picture of freedom of movement: The buck-naked elderly couple taking a high jump into the lake was a stark contrast to the way older people have been treated in this pandemic.

“It’s as if they are fragile and that they’re going to die,” observed Martin Camara, chiropractic specialist and chief executive officer of Intercare Healthcare Systems.

“The elderly have been separated from their families and friends, and their mobility would affect their happiness. Yet, the secret to a long, healthy life is to continue to be relevant, to be in contact with the communities and to engage with people. That was taken away during the lockdowns. Ironically, we lockdown to protect these people but, at the same time, it is causing them to suffer mentally and physically.”

He cited studies that although people tend to lose their functionality over time and develop age-related diseases, these detriments can be abated.

Camara is a proponent of functional aging.

“For an older person, it is being able to continue to do the things that they enjoy,” he explained. People can delay the aging process and need not feel victimized by time or genetics by following a healthy lifestyle.

He cited “The Biology of Belief” by American biologist Bruce Lipton who challenged the norm that our genetics control our functions and that diseases which are common within the family are passed on. The researcher maintained that we can control our health and the effects of our genetic blueprint with the power of positive thoughts and emotions.

Another of Camara’s suggested readings is geneticist David Sinclair’s “Why We Age—and Why We Don’t Have To.” Sinclair researched on NAD+ (nicotinamide adenine dinucleotide), a coenzyme that controls many metabolic processes, and the proteins called sirtuins that respond to stress, cell metabolism and extension of lifespan. Boosting NAD+ levels and activating the sirtuins are antiaging interventions.

Chiropractors likewise approach optimum health from how the body structure interacts with the nutrition and the environment and the emotional and mental state.

“We look at the alignment of the spine and joints and how it affects the nerve flow, mobility, strength, stability and, ultimately, functionality. When you lose mobility, the metabolic health suffers and you become less active. If you have neck, back or ankle pains, you can’t do things you need to do,” explained Camara.

Ray Dempsey, 70, said his success in life came with responsibility and stress. His body responded with a back problem and radiating pain.

“You can’t put on your socks and shoes. You can’t brush your teeth. You’re miserable,” he recalled.

A complete treatment plan has helped not only in returning the flexibility of his spine but also in mending his knees. His lifestyle changes include meditation, eating, exercise and chiropractic care.

Sylvia Helovino, 68, used to do yoga and take long walks daily until a back problem encumbered her movements. She said chiropractic care, physical therapy and myofascial massage improved her well-being.

Camara is one of the four international chiropractic specialists of the developmental group of health-care experts in the World Health Organization that is consolidating references for treatments of low back pain.

He noted that spinal manipulation, which is one of the recommendations, is used in chiropractic practice.

“Chiropractic adjustments (manipulating the joints) affect the activation of your prefrontal cortex, the part of your brain [that] controls the decision-making abilities, emotional health, immune function. It’s like fine-tuning the electrical systems in your spine and brain that allow your body to perform functions better. Studies show that aside from relief of common back and neck pains, patients reported sleeping better and thinking better. The better your spine is aligned, the better your nerve flow from the body to the brain and the brain to your body.”

When a patient complains of a worn-out knee while the other is healthy, Camara doesn’t attribute the imbalance to aging.

“It has to do with alignment and how you carried your weight and structure over time,“ he said.

Most chiropractors are likewise advocates on how lifestyle change can have a major impact on aging. Poor sleep increases memory loss and brain deterioration, according to a research from the University of California Berkeley.

“If you sleep for less than six hours a day, your immune system is depressed as much as 50 percent,” he added. “People feel sleepy but they ignore it. They still watch TV or read and stay up late. Set the air-conditioning at the highest tolerable temperature level. The lower the body temperature, the easier for the body to shut down and go to sleep.”

A diet of whole and plant-based foods, avoiding refined sugars and processed foods not only reverse but also prevent metabolic and noncommunicable diseases such as heart disease, diabetes and cancer.

Moderate exercise or activities of 150 minutes a week or 30 minutes a day reduces major health risks and lengthens lifespan.

Avoid stress which reduces the effectiveness of the immune system.

“You could have a nutrient-dense, plant-based diet and the most expensive supplements. If you’re stressed, then you don’t digest and absorb the nutrients. The stress response is part of a mechanism that shuts down immune system,” explained Camara.

For supplementation, the National Institutes of Health recommends omega-3 fatty acids which decrease the incidence of cardiovascular disease, which became prominent in this pandemic, and normalizes cholesterol levels and vitamins C and D and zinc.

“Vitamin D is like a steroid hormone. It’s good for the muscles, the bones, immune system and combats inflammation. Echinacea can support the adaptive immune system. It’s a natural antiviral. Vitamin D can protect the elderly against acute respiratory distress,” he said.

Meanwhile, Camara has been taking special antiaging supplements such as resveratrol, a chemical found in red wine that acts as an antioxidant and anti-inflammatory agent. Then there are NMN (nicotinamide mononucleotide) and NR (nicotinamide riboside), forerunners to the NAD+ which extends the lifespan. While the NAD+ declines as one ages, NMN and NR supplements can boost its levels and enable optimum metabolism.

Looking younger than 54, he noted that his gray hairs disappeared with these supplements.

No effort, no luck

While the public is often reminded of these lifestyle recommendations, why do people still feel the effects of aging?

“People don’t want to feel accountable. They would rather get an easy fix than do things that affect their health in a meaningful way,” said Camara.

“People age differently. I could have a young 80-year-old or an old thirtysomething. When I see young people pointed to the wrong direction, they make excuses for avoiding golf or running because it hurts. Next thing, you move your bedroom on the ground floor because you are avoiding stairs. That is a losing strategy rather than gaining the functionality to continue to do things that one enjoys. At a certain age, if you don’t use our body, you lose its capacity,” he said.

Ultimately, well-being is about making effort to get positive results.

“Responsible people who take care of their health through diet, regular exercise, stress mitigation and adequate sleep do much better, not just with back pain, but also with general health and metabolic conditions. Even if they are afflicted with a disease related to family history, they are able to manage quite well,” he added.