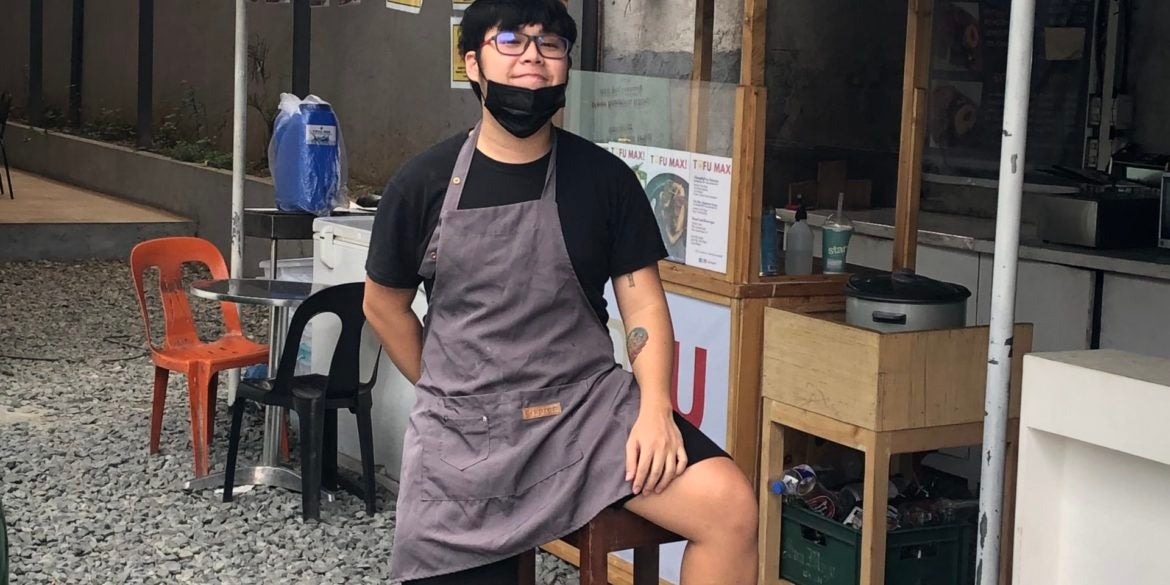 Young entrepreneur shows way to do business in COVID era

MANILA, Philippines—Hair dyeing and food are hardly businesses that complement each other but entrepreneur Johan Joshua Principio is able to juggle those with his regular job as a communications consultant.

Principio is the owner of I Wanna Dye, which offers hair dyeing services, and Tofu Max, which specializes in tofu-based dishes.

His ventures belong to two different industries as they were born out of different purposes.

Principio said he won some sort of freedom when he entered college as this allowed him to dye his hair whatever color he fancied, giving in to his dream of getting a tinge on his locks.

“I’ve always been a fan of funky hair colors. I wanted to try it so bad when I was so young and I just was told that it wasn’t for me, that I wasn’t allowed to do so,” he said in an interview with INQUIRER.net.

“But, when I entered college, I took the liberty of the environment. It was too embracing, It was loud. It enabled me to be who I am today,” he said.

“When I entered college, there weren’t many restrictions, especially with clothing, hair color,” Principio said.

“So, I took the chance. And then from then on, I started dyeing my hair with different colors. I went from blue, green, pink, and a lot more, and it was so enjoyable that I wanted to do it to others as well,” he said.

He added that his friends asked him to dye their curls which went favorably, prompting him to consider it as a business.

In an unrelated business, Tofu Max, Principio said he ventured into eating more like a gourmand than a chef.

However, the limitations brought by the COVID-19 pandemic led Principio to preparing a dish for himself.

“I wasn’t really a fan of cooking. I’m more of an ‘eat’ person,” Principio said.

“I enjoy eating but not so much with cooking, especially growing up when we were told, ‘you can’t cook,’ ‘you don’t know how to cook rice,’ and so on. That would discourage you, really,” he said.

“But, when I got a chance, the pandemic happened, I had to cook for myself and discovered a lot. I realized that it’s just following instructions simply and then making it all about yourself already. So, you add whatever suits your taste buds,” Principio said.

According to Principio, he got tired of consuming meat and he noticed he was gaining a few more pounds until he discovered the wonders that he could do with tofu.

He introduced his dish to his friends which they enjoyed. From then on, Principio saw the potential of tofu as a business.

“When I start seeing a potential in something, I nurture it,” he said.

I Wanna Dye was not spared when COVID-19 pandemic lockdowns drove people out of jobs and led to the closure of businesses.

Principio recounted that he had to take a pause and reassess the fate of his venture along the way. Fortunately, he saw light at the end of the health crisis tunnel.

“When the pandemic or lockdown started in March [2020], we really had to take a pause and during those times, we were really able to reassess: Is there really a need for us still given that people weren’t really going out much?,” the entrepreneur said.

“But then, along the way, we discovered that people were really stressed out. They wanted to look beautiful. They wanted to express themselves the way they can and that’s where the need for I Wanna Dye comes out,” he said.

After pondering over whether I Wanna Dye should push through, Principio’s yearning for hair dyeing prevailed.

But he struggled to find potential customers for his other venture, Tofu Max, since it was established amid the pandemic, because of the impact of lockdowns.

“I think the challenge with Tofu Max now, given that we’ve just launched it recently, so given that it’s during the pandemic, it’s quite obvious that there aren’t much people to sell your things to,” Principio said.

“You really have to go the extra mile to introduce your product to people to let them know that you exist, and that’s quite a challenge for me,” he went on.

Business as platform for advocacies

In a digital world where almost everything is online, Principio maximizes the internet for his business , specifically I Wanna Dye, by using its social media pages to promote advocacies on mental health, equality, and even politics.

get a chance to WIN an all-expenses-paid PINK HAIR transformation from I WANNA DYE. Just like our page, tag 5 of your…

WAW, AESTITE! As we observe #WorldSuicidePreventionDay, we take this opportunity to raise awareness about mental…

“We want to be able also to utilize that in order to push for the advocacies that we also have. So, it’s like hitting a lot of birds with one stone. You use the platform to introduce your brand and at the same time, you use it to push for advocacies,” he said.

I Wanna Dye uses its social media platforms to let people know its opinions on political issues, too. CONTRIBUTED PHOTO

“Given that I Wanna Dye has this niche of millennial and really young market, we hook them by speaking their language. So, that’s in the form of memes, weird videos, and such, and by being political,” the business owner noted.

Look around you, anything can be an inspiration!

“We use the platform to push for advocacies and by being political, we also express ourselves and help encourage people to be informed so that they make wise choices the way that we do,” Principio said.

Principio called on new entrepreneurs and fellow business owners to recognize their privilege and use it to elevate their ventures.

“You won’t be able to start a business without a capital,” Principio said.

“Starting up a business is not an overnight success. Although it all starts with a dream, you still have to ground yourself in reality. So, that’s how you plan things out,” Principio added.

For hair dyeing, I Wanna Dye offers home services for as low as P2,000 and a maximum of P6,000. Clients will be notified of any additional costs beyond the price range.

Principio said that he wanted I Wanna Dye to be accessible and affordable with reasonable, and transparent prices.

On his other venture, for a less-guilt healthier alternative to meat, a good-for-sharing tofu-based dish could be availed of for as low as P109 at Tofu Max.

Among the varieties of the outlet’s Sarap ng Pinoy tofu-based dishes are adobo, Bicol express, and their best-selling sisig.

Mural artist honors dad by doing what he does best: Paint