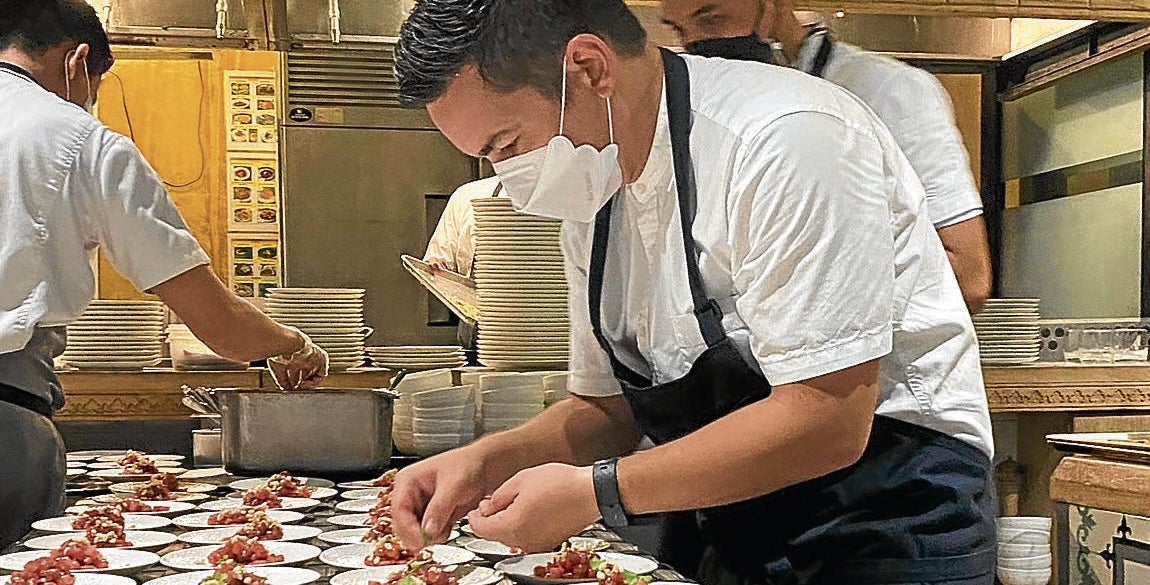 As someone keen on learning about and promoting regional cuisine, I made it my personal mission to bother Kata Agmata, One-Of Collection’s director of marketing, to reserve a seat for me if they decide to offer Boholano menu in their private kitchen in Manila. Last weekend, after much pestering, my request was finally granted and, as luck would have it, I was whisked off to Panglao to enjoy the dinner in situ.

When developing the menu, executive chef Greg Villalon turned to his Bohol-born, -raised and -based kitchen team for an idea and taste of their home-cooked fare.

“It’s a bit hard researching about their food,” he says. “It’s not as popular as other Filipino regional cuisines, so I mainly relied on the staff. Then I tweaked the recipes for a more familiar presentation.”

The meal started with Kinilaw na Langka, a pretty straightforward dish with the unripe fruit taking the place of fish. To add variety in flavor and texture, the chef threw in a bunch of other pickled vegetables such as carrots, cucumbers, onions and bell peppers.

The refreshing salad came with a serving of Binakol, presented in a hollowed-out young coconut shell. Cooked simply with coconut water, the sili leaves, unripe papaya and chicken, which was turned into a tender meatball, made for a light starter to ease us into the punchier-flavored dishes that followed.

The entrees, served with fresh sea urchin fried rice, came in family-style portions. There was Mixed Seafood Sinanglay with Takla, which looked similar to the one I enjoyed in Bicol where a whole tilapia, sometimes filleted, was wrapped tightly in pechay leaves then simmered in coconut milk.

Villalon’s version had a medley of seafood tucked inside the edible pouch. This, he says, is how the locals really prepare their sinanglay. For another layer of flavor, the chef seasoned his coconut milk with annatto and ginger, then topped it with takla, seasonal freshwater crayfish available in Bohol from September to December.

The pork humba in this part of the Visayas was also different from what I had elsewhere. It was more tart than sweet, and the braising liquid came without star anise or tausi (salted black beans). Villalon fried the belly to a golden hue and crunch, then laid the slices on a pool of the savory sauce studded with pineapple bits.

The Kinamatis na Kambing was something I’ve never had or even heard of before, and I am very happy to add it to my vocabulary. It’s basically goat stewed in a ton of sour tomatoes. The chef presented it rendang-style, shredded and fried.

To complete the meal, the kitchen served generous slices of tart with two layers of filling—peanut custard and kalamay—for dessert. Interestingly enough, the crust was made of the Bohol delicacy Peanut Kisses, crumbly cookies in the shape of the Chocolate Hills.

Now on its seventh installment, BEats is a pandemic pivot project of Amorita management to revive the ailing food scene in the province, as well as to promote camaraderie and provide support in the local communities. The initial runs put the spotlight on homegrown talents, followed by Manila-based chefs who offered a sampling of their restaurant’s stellar dishes. The bimonthly event invited Josh Boutwood for a one-night-only, eight-course dinner to cap off the year.

The menu was a representation of the brands he conceptualized and developed, namely Helm, Savage and Test Kitchen. “It’s an amalgamation of all the concepts because we wanted to showcase who we are as cooks in a setting that is not ours. All three restaurants have three separate mantras which we combined into one solid menu,” he says.

He kicked off his repertoire with his signature duck prosciutto on a thin piece of toast along with garlic emulsion, pickled carrots and fresh cheese. It was followed by a similar dish he serves at Helm, cubes of fresh General Santos tuna and compressed watermelon lightly dressed in a wasabi vinaigrette then topped with puffed adlai. Two familiar numbers from Test Kitchen came next—baked potato gnocchi draped with pecorino Romano, chive oil and cured lamb, and a slice of their naturally fermented sourdough bread, the starter of which he and his equally talented wingman, Paolo Bayani, hand-carried to Bohol.

Savage was represented by braised local pork belly on a bed of burnt eggplant puree, while the fork-tender slow-cooked Wagyu beef cheek on cauliflower puree was a nod to another Test Kitchen trademark, something he usually serves with celeriac.

Two Boholano ingredients Boutwood successfully featured in his repertoire were takla, which tasted like a cross between shrimp and lobster, and kalamay, a sweet delicacy made of coconut milk and glutinous rice. He topped the first with his crab fat adlai porridge, while the second was turned into a featherlight mousse paired cleverly with dark chocolate-rum sauce and candied pili nuts.

Over dinner, I got to chat with Leeds Trompeta, general manager of Amorita Resort, who shared with me his other culinary plans not just for their property but, consequently, also for the whole island province. And it’s both comforting and inspiring to know that, with his team’s noble efforts, Bohol will finally get the acknowledgment and appreciation it truly deserves.

Special thanks to Amorita Resort, Tumi, Cebu Pacific and Don Papa Rum. Follow the author at @fooddudeph on Instagram.