Why we give space to ‘Hallyu’ fans | Inquirer Lifestyle ❮ ❯ 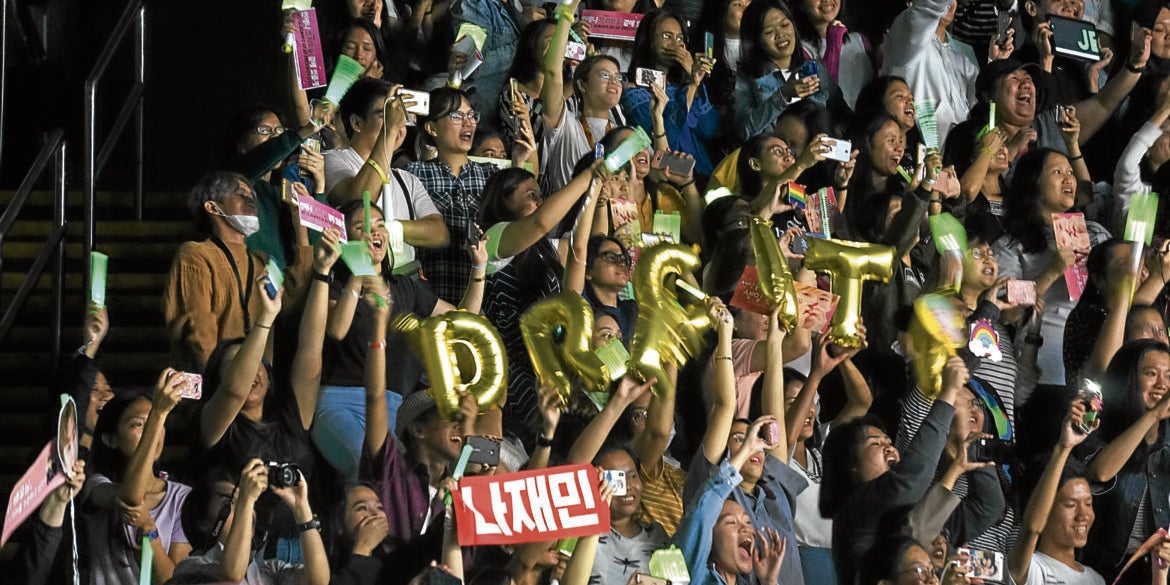 Why we give space to ‘Hallyu’ fans

There is nothing like being a fan. It’s hard to explain how a person who doesn’t know you can make your heart race or make you break into a song and dance. Only fans can accurately describe the unparalleled joy they experience when they spend hard-earned cash in support of their idol.

To be a fan is to be in love. And these love affairs have developed their own language and culture.

In the ’80s, the decade when Inquirer was founded, women celebrities were pitted against each other. Thus, rivalries between fans of Nora Aunor and Vilma Santos, Maricel Soriano and Sharon Cuneta were legendary. Then there were love teams in the 1990s and later the teleserye stars of the 2000s.

But fandoms completely evolved when social media exploded. Celebrities now can directly reach their followers, and fans have more personal stories to tell about their idols. Interactions outside events are no longer limited to bumping into them in public places, such as elevators and restaurants.

These fan stories have found their way into our pages. And what interesting and fun stories they were. For example, there was a story of how Maine Mendoza surprised fans by attending their beach get-together. However, the unwitting fans were already enjoying their island hopping when she arrived. Imagine the melée in their rush to cut their tour short to return to the resort and meet her.

Hallyu also changed the fan culture locally. Korean celebrities demand respect for their personal space. It’s an entirely new concept for Pinoys who think that it’s okay to touch celebrities’ hands, clothes and hair when they see them in public. Hugging or kissing their idols on noontime shows is also normal here.

But the obsession with Korean pop culture taught us that this is not okay. Hugs, kisses and even putting hands over shoulders have to be initiated or allowed by the celebrities. Breaking this unwritten rule is an invitation to be educated.

Because touching is taboo, fans, like yours truly, get more creative to get closer to the celebrities. We end up with exciting stories of pilgrimages to shooting locations of dramas and music videos.

Inquirer Lifestyle and Super became avid listeners of these fan adventures and stories of visits to places their idols owned or frequented.

Pinoy Hallyu fans were mocked before the popularity of “Crash Landing on You” and “Squid Game.” K-pop fans got bullied before BTS became mainstream. They were ridiculed for liking music and shows whose language they could not understand.

What deriders don’t realize is that these fandoms are organized. They’re a tight circle that support each other. A mean word doesn’t stick when you have thousands of other people holding your hand and showing you that it’s okay to be different, that it’s okay to be a fan.

It’s also not unheard of for fans to show collective strength on political issues. They’ve been known to hijack hashtags for social actions. K-pop stans (or devoted fans, in fandom-speak) have also led Twitter campaigns to encourage users to register and vote for the 2022 elections.

This kind of strength and friendship was what we wanted to celebrate when we conceptualized Super K. It’s a section that features Hallyu stars and their stans.

We hosted the Super K Viewing Parties with the goal of meeting the fans personally. Lee Seung-gi PH and Ji Chang-wook PH (JCWPH) were the first two fandoms to be invited. But then the pandemic happened, so we put those events on pause.

But because people were stuck at home, they also started to reminisce about the things they did in the name of being a fan. It led us to heartwarming stories about how Korean dramas and K-pop kept them alive and motivated.

One letter writer told us of how songs of Lee Seung-gi kept her company in the hospital while her father was in the intensive care unit. Another told us that she studies hard to be rewarded with merch. Some shared how they’re working hard to save enough for a trip to Korea.

In return, Hallyu actors know how to uplift their fans and make them feel special. They thank their stans first when they succeed in something. It’s not unusual for these celebrities to reveal when they’re having a hard time, but they will also say that they will persevere because they know there are people who believe in them.

These little things make them relatable and are enough to make fans feel important and needed.

This exchange of positivity and good vibes is why we dedicate some of our pages to Hallyu. We give space to popular and rising stars, and fandoms big and small alike. We do it so that every Filipino fan can have affordable merch—our newspaper—that they can physically keep in their collection or hang on their walls.

There are plenty of pages and websites that write about fan activities and fan stories. But once, I dared ask Anne dela Cruz of JCWPH why they insist on getting published in the Inquirer or InquirerSuper.com.ph. She answered, “Sinusulat naman ng iba yung activities namin, pero iba talaga ang ma-publish sa Inquirer.” INQ