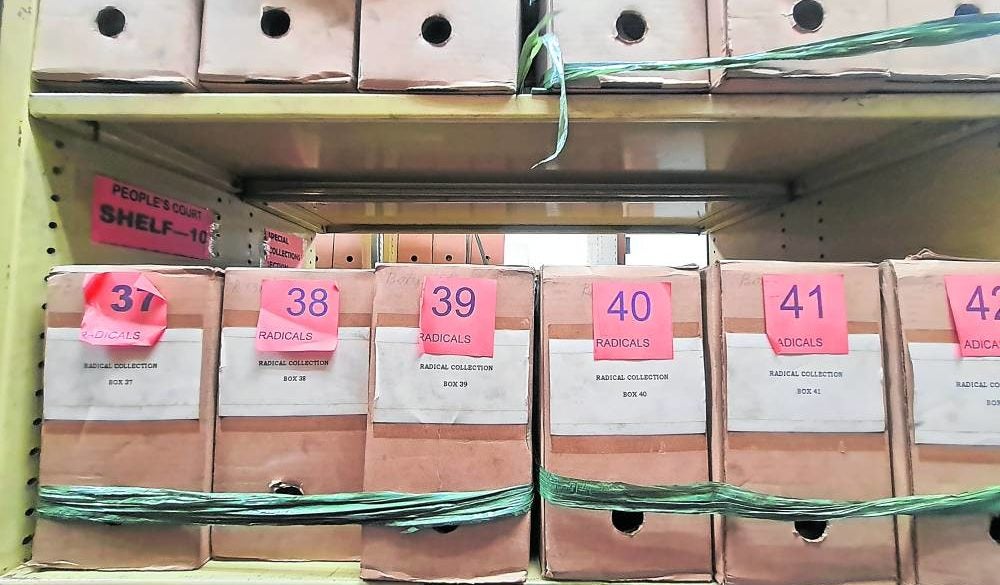 Thousands of books, pamphlets, speeches and other writings against the Marcos regime are being put in order at the library of the University of the Philippines Diliman. —KRIXIA SUBINGSUBING

‘Fahrenheit 451’ in 2021? The purging of ‘subversive books’ in PH state libraries

Noli Me Tangere” was swiftly banned in the Philippines soon after it was published in Berlin, Germany, in 1887.

Jose Rizal’s scathing novel on the abuses of the clergy and the injustices during the Spanish colonial period was seen as subversive by a panel of authorities based in the country. So, before the first copies of “Noli” were even smuggled into the Philippines, Rizal’s novel was already controversial.

“It was a book that you could not be seen with because there were legal measures that could be taken against you,” said book historian Patricia May Jurilla, who wrote “Tagalog Bestsellers of the Twentieth Century: A History of the Book in the Philippines.”

“Noli” may be the most famous novel that was deemed subversive in the Philippines, but it was certainly not the first one, or even the last.

Just in September, three state universities removed from their libraries books, references and reading materials that covered the peace talks between the government and the National Democratic Front of the Philippines (NDFP).

The Kalinga State University (KSU) said that the decision to remove the books from its shelves were made after the organization was labeled a “terrorist organization.” It added that “the action of the KSU Board of Regents only indicates that they are against the NDFP ideologies and they wanted to safeguard the students and the school institution from communist infiltrations.”

Two other educational institutions—Isabela State University and Aklan State University—also removed books that were deemed “subversive,” and in October, the Commission on Higher Education (CHEd) called on the universities and colleges under its scope to toss the “subversive” learning materials.

Some of the books that were purged were: the Comprehensive Agreement on Respect for Human Rights and International Humanitarian Law; essays by Communist Party of the Philippines founder Jose Maria Sison; Declaration and Program of Action for the Rights, Protection, and Welfare of Children; and other reading materials connected to NDFP.

Educational institutions, human rights groups and even the biggest book industry alliance in the country decried the purging of the books from state libraries, underscoring that removal of books is not just suppression of academic freedom but would also hamper critical thinking among the students.

“When we ban certain books, we teach our young to retreat to silence when they need to speak. We push them to close their ears from fear when they need to listen, and we let them grow blind to what they should see,” Book Development Association of the Philippines said in a statement.

The University of the Philippines (UP) School System Library Council pointed out that “insurgencies are contained by addressing their root causes, not by banning books that explain how and why they happen.”

It added: “Book purges are practiced by dictatorships, not democracies; and inevitably, book purges prove futile, as those who banned the ‘Noli’ and the ‘Fili’ (“El Filibusterismo”) for being subversive eventually realized.”

While the “Noli” was banned by Spanish authorities, Rizal’s book was sold in a Manila bookshop, Jurilla said. The cover was changed so as not to draw the attention of authorities.

Interestingly, while holding a copy of the “Noli” was like committing mortal sin, “the effect, of course, was to be the reverse, with interest being piqued and copies being clandestinely distributed,” Salcedo Auctions said in the notes for the auction of the groundbreaking book.

Several books that have been banned for various reasons have enjoyed fame, like Salman Rushdie’s “The Satanic Verses.” This phenomenon, which happens when there is an effort to hide something but the results go the other way, is called the Streisand effect.

“Whatever the reason, once a book is banned, a sort of aura of mystique is created around it that, more times than not, draws readers who want to decide for themselves whether it is in fact unfit for publication,” Britannica said.

According to Jurilla, who teaches book history and literature at UP Diliman, the Philippines has “a long, checkered history of censorship, of book banning.” Before the Philippines became a colony of Spain, the European country already had in place laws that banned secular materials from coming in.

There were several documented cases of book burnings, in the 1630s, when a book of charms for lovers was torched, and even the burning of the Quran. Books entering the country were monitored to prevent secular materials from coming in—materials that were seen to intervene with the establishment of the Catholic faith, she added.

Structures were already in place before “Noli” was even written. There was the Comisión Permanente de Censura (Permanent Commission on Censorship) which was established in 1856, and in the following year, the governor general made sure that materials for printing were controlled.

“You could say that as long as books have been produced in the Philippines, or actually in the world—you might even stretch it to that—censorship has come with it and banning has come with it, because we’re not the first ones to realize the power of books and the power of ideas recorded,” she said.

“[It’s] one thing to talk, it’s one thing to tweet and all of that. That’s ephemeral, but the book—you can pass it on and keep it. The format of a book allows for extended discourse. So yeah, it has a longer lasting power.”

Just some of the famous instances of book purging in history are the large-scale burning of books as ordered by Chinese emperor Qin Shi Huang. Mao Zedong also purged books that were identified as anti-Communist. The Taliban had also previously destroyed libraries across Afghanistan. And maybe one of the most famous cases was the Nazi book burnings, where 25,000 “un-German” books were set on fire in Berlin’s Opera Square.

But it’s not always subversion that gets a book censored. Allegations of immorality have sent countless books to the pyre.

In Ray Bradbury’s 1953 novel, “Fahrenheit 451,” all books found are subject to burning by the ironically named “Fireman” in a dystopian method of control. That book came out almost six decades ago but its theses and concerns remain ever salient now.

The declaration of martial law in 1972 led the UP Main Library staff to gather the voluminous writings of the political underground to protect them from the military, all 51 boxes, which in 1996, began to be indexed with the assistance of Cornell Unversity scholars. By this time, they were now called the “Radical Papers,” and are finally being digitalized.

As reflected by the statement, there is apprehension that the “Radical Papers” will be victims of the purge. “When we assume that these materials can make rebels out of students because they found them in the library, it’s like saying these students cannot be discerning,” Elvira Lapuz, the university librarian at UP Diliman, told Inquirer reporter Krixia Subingsubing. “To say that such materials can sway or influence them is oversimplifying.”

UP deputy librarian Eimee Lagrama said, “How do you define subversive anyway? How can you fully understand why it is called subversive in the first place if you bar people from reading them?”

She added, “We are not even in [a] position to identify materials as subversive. Even if you tell us to remove this from the collection, it will be going against our mandate [to make our resources available to students].”