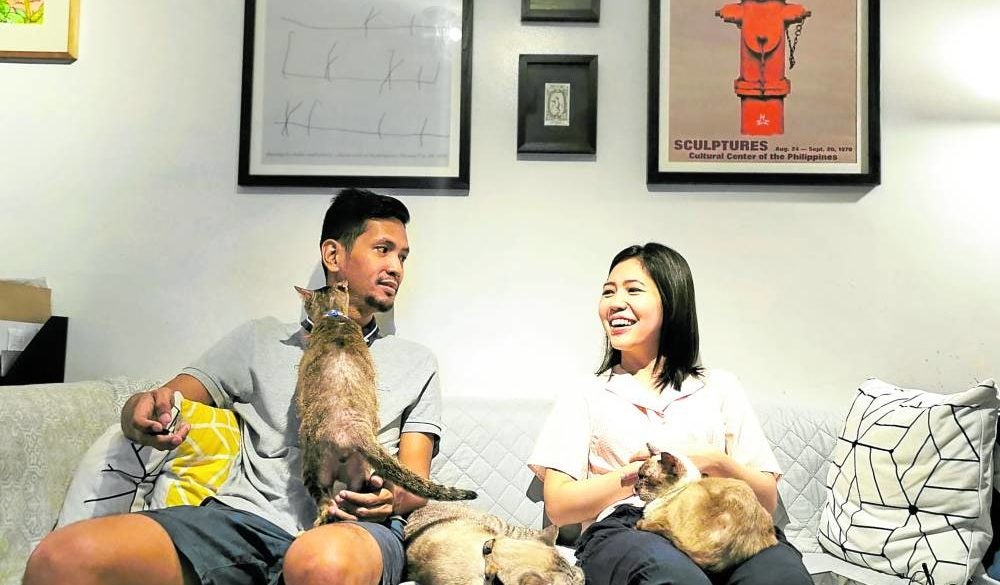 Grace Ng and husband Martin Engracia with their cats: 8-year-old Critter, 4-year-old Billy and 10-year-old Nikki, who is the alpha of the household —PHOTO COURTESY OF GRACE NG

They raise pets, not kids—are they ‘selfish,’ as Pope Francis suggests?

It’s funny how humans tend to think of and treat their furbabies as their own children. They dress them up, bring them places, talk about them incessantly and even create a social media page dedicated to their furry creature.

It’s real and it’s amusing. (This writer is guilty of all of the above.) The Pope thinks so, too. However, Pope Francis also said that taking care of pets instead of raising children is selfish, and leads to loss of humanity.

“Yes, it’s funny, I understand, but it is the reality. And this denial of fatherhood or motherhood diminishes us, it takes away our humanity. And in this way civilization becomes aged and without humanity, because it loses the richness of fatherhood and motherhood. And our homeland suffers, as it does not have children,” added the Roman Pontiff, whose namesake is the patron saint of animals.

It’s a pretty touchy subject, especially now when people postpone having children due to global crises like the pandemic and the climate emergency, on top of their personal beliefs. And also, because pets are precious.

“They are not as much as pets as they are family,” said Alec Corpuz, a fur daddy of two dogs. Corpuz and his wife, Muffy Tirona, take care of their four-legged family members, Kimi and Madeline.

The couple has been married for a few years now and don’t plan on having kids. But to a certain extent, Corpuz understands what the Pope is trying to say. Corpuz stressed the importance of raising the next generation to ensure the continuity of mankind’s good works.

“But at the same time, I also feel that for some people, not having children is not a conscious effort. It’s because of things out of their control, which doesn’t make us any less human, I think, only different,” he told Lifestyle.

He added: “I feel that people have their own challenges, and that people in a position of privilege shouldn’t judge those who are opting not to have children. At the end of the day, resources come into play, and I think I speak for everyone when we say we don’t want our children to feel wanting. Rearing a child is not a decision that should be taken lightly and is one of, if not the biggest decisions a person can make—more so in the current environment.”

Like Corpuz, newlyweds Grace Ng and Martin Engracia have no plans of having kids in the future. They have, however, six adorable cats—Critter, Niki, Billy, Delia, Gigi and Fifi.

“They are as important as life itself,” said Ng, who is publications head for a fine arts gallery.

“Humanity is not enriched from someone being a parent or bearing offspring. I believe it’s enriched by being good to fellow creatures cohabiting the planet—humans, animals, plants, whatever!” she added.

Writer Minka Tiangco and her boyfriend Clint have no plans of having kids in the future—yet.

“Right now, I just want to enjoy what I have—my youth, my relationship with Clint, etc.—and I know that having a child will not allow me to do that,” Tiangco said. “But in the same vein, I also think that there are so many things I need to learn and develop before I become ready for the responsibility of being a mother. If ever I have children, I want to be sure that I can give them a good life. With the current raging global crises, coupled with my ill-prepared self, I think it would be irresponsible to have a child in the coming years. It would also be unfair to the child.”

Tiangco has a dog named Hotdog (who prefers Clint over her) and a cat named Coco. Over the past years, she has also rescued cats who have become part of their home.

“To us, it’s not a question of owning a pet. What’s important to us is that we help and care for animals who need it, especially when we have the capacity. They are living beings just like us, so I believe that they deserve the same amount of care and respect that we give people,” Tiangco added.

Model, baker and entrepreneur Jem Austria said that growing up with pets and taking care of animals has shaped how she sees the world.

“Having pets helps you develop empathy toward other living beings. It will teach you a lot about responsibility,” she said.

Austria also plans on having kids in the future, but now she’s in the company of a 7-year-old Jack Russell terrier named Popcorn and a rescued ginger cat named Ming.

“Every year, during the Feast of St. Francis of Assisi, I always bring my dog to participate in the blessing of pets. The priest always tells the pet owners that pets are not a substitute for having a child or a human connection. I find that true. Although, a person has the right to choose if she wants to have a child of her own or not,” she said.

Civil servant Ria Fernandez-Obina also understands where the Pope is coming from. She explained that when she and her now-husband attended the prewedding seminar for Catholic couples, they were taught that the husband and wife’s responsibility is to “build a family, to fulfill the promise of the Lord, which is to build a church.”

“We view marriage as something that’s all about love. But I learned that marriage is also a calling. You and your partner were brought together not just because you love each other, but because you were destined by the Lord to fulfill his promise to mankind,” she told Lifestyle in an interview.

Fernandez-Obina and her husband, Ralph, were married last year, and they plan to have kids later, when they are financially ready and when their house is finished. She added that they are both in the middle of a transition period in their lives—academic- and career-wise.

The couple also wants to focus on their 6-month-old toy poodle Charlie.

“Now we see Charlie as our baby. I realize that I should also allot this much energy and effort for when I have a baby,” she said. “Charlie always waits for me when I come home from work. He’s always excited; he begs for belly rubs; he wants to play because he’s been quiet the whole day.”

She added, “It’s funny that sometimes my husband and I talk about how we should spend quality, uninterrupted time with Charlie during the weekends. We learn to be fully present with the people we love. That’s what Charlie made us realize.”

Fernandez-Obina said that taking care of Charlie has shown them their personalities as parents. She admires that her husband can discipline Charlie when he shows signs of aggression. While the common understanding is that humans take care of pets, pets also have a way of teaching and taking care of their humans. For Ng, her cats have made her sensitive to the needs of others. “Animals don’t communicate the same language as humans, but I feel it when they want love and affection. They’re also good for my mental well-being. I unload some heavy stuff on them as they’re good listeners who never interrupt,” she said.