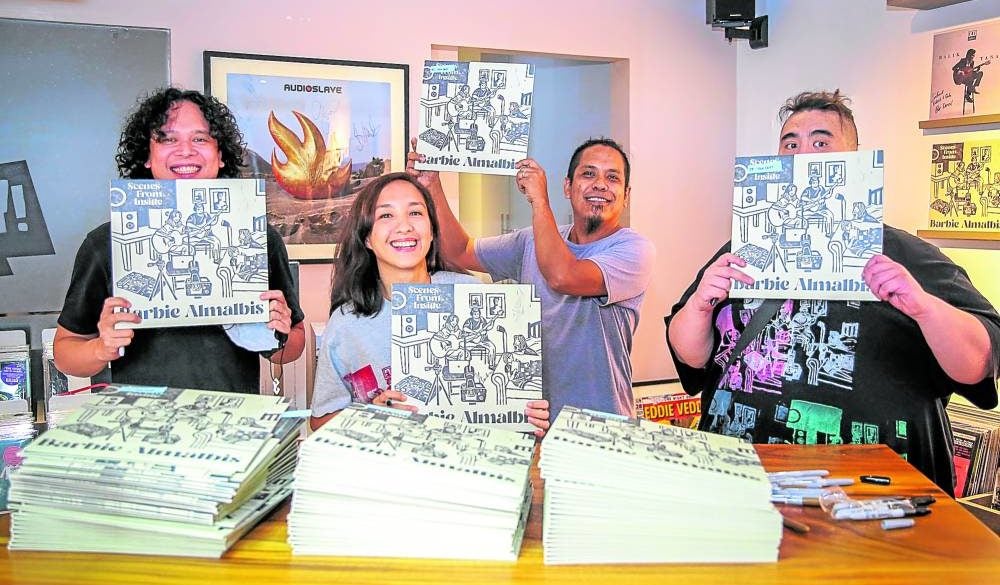 Barbie Almalbis on ‘Scenes from Inside’ and stories from a pandemic “Lahat naman tayo nag-pause ang buhay. We didn’t know what was going to happen next. And then we found our momentum again, and we decided to continue.”

Reading this statement by singer-songwriter Barbie Almalbis could lead you into thinking she was probably reflecting on society’s collective experience during the pandemic: Most of our days were spent indoors, putting our plans and schedules on standstill and leaving us clueless about the next step we should take. Eventually we found our footing, and chose to move on with our lives, however difficult it may be given our individual circumstances.

In an online interview, Almalbis was actually describing the early production stage for her latest album “Scenes from Inside,” which was released a few weeks ago on vinyl. Before the pandemic hit, Almalbis and her bandmates had already begun work in a recording studio for a prospective album, and some songs became part of “Tigre,” an extended play. But when pandemic restrictions limited their in-person jamming sessions, they had to be more experimental—to improvise and to explore other methods just so they could bring life to the other songs they had in mind.

They relied on DIY home recording sessions, and exchanged recorded demos. Their drummer, Jonard Bolor, who didn’t have a full professional drum kit recording setup at home, used a cardboard box as his kick drum and a plastic bag or cellophane as his snare for “An Aspin’s Song.” Almalbis opted for an acoustic arrangement for the song “Silaw” to simplify the process. Almalbis asked one of her friends, Michael Alba, who had a full setup at home, to record the drum tracks for “Kumpas.”

“Despite the uncertainty of releasing an album during a pandemic, we just wanted to go ahead with it and share music,” said Almalbis.

Almalbis cowrote some of the songs with her husband, visual artist Martin Honasan. Martin’s brother, Karel, plays bass guitar for the band, and Almalbis’ sister-in-law, Kuki, designed the album cover. Writer Alya Honasan, their aunt, wrote the lyrics for one of the songs.

Since they all live in the same compound, it was easy for Almalbis to tap the combined talents of family members as part of the creative force behind the album, and this further strengthened her ties with them.

“I guess the good thing that came out of this [pandemic], it brought us closer together. We learned to work with each other even more than we ever did before.”

Martin unfortunately got infected with the virus at the start of 2021 and Almalbis looked after him for two weeks in the hospital. While she was there, Almalbis wrote “Peace Where We Go,” a song about one’s faith in God.

“It was a faith-stretching time for us,” Almalbis recalls of her husband’s two-week confinement. Of all the tracks in the album, she considers this song as one of the most personal.

“Even during the recording process, we were going through a lot of uncertainty,” she added. Despite all the uncertainty, Almalbis poured her heart and soul into writing, singing and recording the song.

Almalbis’ grandaunt, Nita Lichauco, a pet lover and animal welfare protector whom Almalbis lovingly referred to as Tata, would often ask Almalbis to write about “asPins.” Almalbis never got around to writing the song before the elderly relative passed on in 2020, because she found it challenging to write about something she hadn’t experienced—having a pet.

She told her husband’s aunt, writer and journalist Alya, about her grandaunt’s unfulfilled request. Tita Alya, also an animal lover, agreed to help her and wrote the lyrics for “An Aspin’s Song.”

A love story, but not hers

“Iyong-iyo,” a song she cowrote with Martin, is a poignant love ditty inspired by the story of a longtime employee of the Honasan household and her husband.

Courtship in the time of social media

During the pandemic, our connections over social media became more prominent, and perhaps vital to our survival. Almalbis summarizes the extent of our online interactions in “Comment,” starting with “Isang million likes, isang million smiles, isang million love.” It’s a cute, light-hearted song that most of us could probably relate to, especially those who have experienced being wooed with the use online communication tools.

What she absolutely loves about her job, still

“My favorite part about being a musician is being in the studio. It’s the creative part. I really love thinking about songs; recording, building a song, seeing a song come together into an album.”

Being forced indoors has given Almalbis more time and opportunity to focus on what she loves most and the end result was “Scenes from Inside.” The 12-track LP contains songs not included in the album’s digital release in July.

“Scenes from Inside” is exclusively available through Backspacer Records.