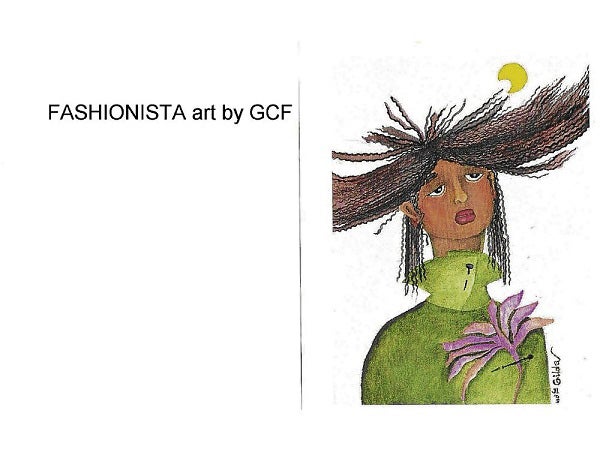 My stylish friend, Cecille Zamora van Straten, dropped by, all in black, as usual, in the most dangerous boots ever. She was bearing a gift in a big palo china box. It’s a doll! she announced, beaming proudly. It’s my dad’s birthday and I bought him a doll so I got one for you, too.

I thought it might be a Shirley Temple doll or a kewpie doll, some cute, plump, nostalgic, smiling icon of my childhood. Her name is Kerkie, said Cecille, She’s by Lynard Paras. I knew Lynard Paras as an art awardee.

Then I saw Kerkie. I had to hold on to a chair. She had very bright, large and spooky eyes, black rotten teeth and a Babalu chin. She was eating barbecue on a sharp stick (or was it a human thigh?) Isn’t she lovely? Cecille chirped.

How did your dad like his doll? I asked. He loved it! said Cecille. The horror must have still reflected on my face, so Cecille put Kerkie as far away from me as possible.

I should have known! The doll had come from an aberrant toy shop adored by young people called Secret Fresh. My own grandchildren liked dropping in on it in Ronac Building, Ortigas, to buy some bewitched creature, vomit or poo. The artistic ones dreamt one day of seeing their own ghoulish drawings translated into those horrible plastic things. Their lola had no business being there.

But my 48-year-old daughter-in-law, who had adopted Kerkie, insisted, one Sunday after a lunch in Greenhills, on dropping by Secret Fresh. She wanted to buy Vomit Boy, another (ghastly) toy, this time by J J Zamoranos. Vomit Boy is a green child suspended in the air by its own Niagara Falls of vomit.

The horror shop is owned by someone called Big Boy. It is manned by a most amiable creature, long as an uncut spaghetti, named Robert Dim.

Lilli-Ann wavered between Vomit Boy and Garapata. Garapata is, yes, a fat, black, blood-sucking flea. There was a big bloated Mama Garapata and her brood of three in the display case. They surrounded a frightened dog with a human body.

Eleven thousand pesos, said Robert Dim. For the set? asked Lilli-Ann hopefully. No, only for the Mama Garapata, said Robert. Separate prices for the babies and the dog.

Lilli-Ann wandered around. She saw Zombie Robber and a trio of witches with black mascara up to their temples. She spotted neon colored skulls. There were some bent penises. She saw an octopus from hell. She liked everything. She didn’t know what to choose.

Elmer Borlongan agreed to design a toy for us, bragged Robert Dim to me. Elmer is the most revered painter in town. He creates unsettling figures but they are not quite unhinged. I will come back when you have Elmer’s, I promised.

Robert brought us to an art gallery on an upper floor. Yey! Exhibit! said Lilli-Ann. The exhibitor was a guy called Marcus Nada. There was a big cardboard sculpture of some cut arms and legs. On the wall were cartoons. The caption of the first cartoon read: “Lahat ng May Tattoo Addict.” The next one: “Lahat ng May Bigote Masamang Tao.”  I’m glad my husband who had a moustache was not with us. He would have gone ballistic. But he’s now a dead zombie, too. I tried hard to avoid looking at the rest of the art.

Robert insisted on taking us to the basement, which to me looked like a former abbatoir. It contained long walls of street art. We stood in front of a nice one that looked like it had been through Sodom and Gomorrah. Someone wants to buy it, said Robert, but it is painted straight on the concrete wall. If we take it off the building might collapse.

On the way back, we had to pass by a floor selling mattresses. My bored son, who had been driving us, plopped down on one of the mattresses. You are allowed to nap on that for a one hour trial, Robert said.

Mol turned over on his stomach. “Feels good,” said Mol. “Try it, Ma.” I looked under the bed to make sure none of the critters had followed us.

“Ma’s bed in her house is ready to fall apart,” Lilli Ann told Mol. “I’ll buy the bed for you,” Mol told me. The price does not include the bed, said the salesman, only the mattress. Throw in the bed too, said Mol, taking out his credit card. The salesman made a lot of calculations. Robert bounced on another bed.

Sold! Mol said. Mol had bought me a nice new mattress and bed. It was the happiest Sunday of my life.