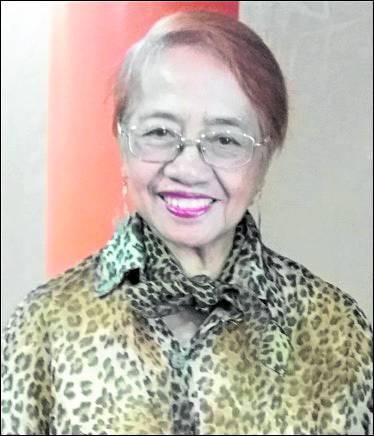 Influential academic publisher Esther M. Pacheco died on Feb. 1 due to multiorgan failure from complications of pneumonia. She is survived by her two children, Kathleen and Michael.

Born Oct. 2, 1938, in Baguio, Pacheco graduated from St. Louis University and was director of Ateneo de Manila University Press from 1977 to her retirement in 2003. She then served as an editorial consultant for Vibal Foundation Inc.

In a statement, the university press lauded Pacheco for building up the press as one “respected by Filipino and foreign scholars for consistently coming out with books that tackled issues in a number of disciplines,” and championing the work of Reynaldo C. Ileto, Resil Mojares, Vicente Rafael, Filomeno V. Aguilar, Patricio Abinales, William Henry Scott, Alfred McCoy, Michael Cullinane, Paul Hutchcroft, John Sidel and Paul Kramer in the field of Philippine studies.

“As press director, she understood the key role of the university press to retrieve long-forgotten texts and make them useful to the present … Further, Esther Pacheco made sure that critical works that plotted the emergence and development of various genres—poetry, drama, novel and short story—were crucial to contextualize the rise of the genres. An important but often marginalized aspect of this body of writing were texts written by female writers, such as Liwayway Arceo, Angela Manalang Gloria, Paz Marquez Benitez, Genoveva Edroza-Matute, Rosario de Guzman Lingat and Rosario Jose, among others.”

Karina Bolasco, current director of Ateneo Press, told Lifestyle that Pacheco “laid down clearly what a university press should do as the supreme expression of the university’s mission to contribute to nation building. It was to publish books that are pioneering in new research and knowledge; that bring forth original ideas which could validate, invalidate or provoke older ideas; and all these books should be able to hold their mettle when raised up to scrutiny. She encouraged Filipinos here and abroad, and even foreign Filipinists interested in our history and current concerns, to articulate, whether in a creative or academic and critical matter, their varying interests in all the many disciplines of learning.”

The Book Development Association of the Philippines, of which Pachecho was a founding member, held an online memorial Mass officiated by Fr. Mario Francisco, SJ, on Feb. 5.

In his homily, Father Francisco noted Feb. 5 was the Feast of St. Agatha of Sicily, a 3rd-century Christian martyr who is commemorated for her refusal to renounce her beliefs despite torture and eventual death on the orders of the Roman Emperor Decius. He compared St. Agatha’s strength of beliefs to Pacheco’s activism, particularly with causes such as the urban poor and gender inequality.

The Mass was followed by a tribute given by industry colleagues, longtime friends and family. Pacheco’s daughter Kathleen thanked the guests. Her ashes were inurned at the Sta. Maria della Strada Parish columbarium on Feb. 8.

Pacheco died in the 50th anniversary year of her beloved university press.

“Slowly, she built a list of what we now consider foundational classic texts in different fields reprinted every year since first released,” Bolasco said of Pacheco. “She began a tradition of publishing books that engage a nation, that provide social and cultural interventions. That list we stand on today. That tradition we continue at the Ateneo de Manila University Press, and on our 50th anniversary, we renew our commitment to that mission.”