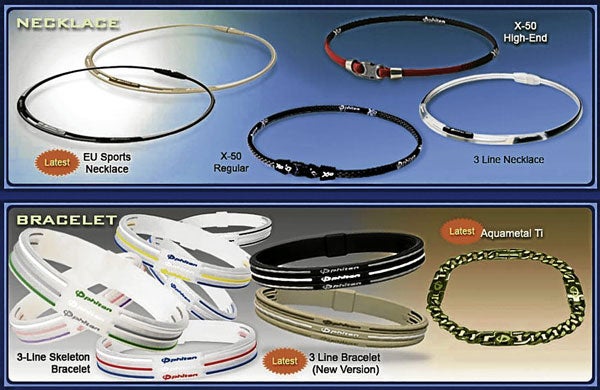 When the balance of energy flow and blood circulation is restored in the body, the body can function to its optimal level. The body recovers fast, becomes more flexible, fights chronic stress better and the overall health and well-being is improved.

“When energy is ‘coordinated,’ when the flow of electric current in the body is smoother, you will be functioning physically and mentally at your optimal best,” said Yuzo Fujitan, sales manager, international business department, Phiten Co. Ltd.

Fujitan said the word “optimal” has often been misunderstood by consumers, especially by athletes where winning gold is sometimes determined by a fraction of a second. Optimal, explained Fujitan, simply means being able to perform at your peak level performance.

“Phiten will not make a superathlete out of you but it will make you become better at your sport,” Fujitan said.

If based on your training, for example, you should be swimming 5 minutes faster than your time but somehow you haven’t seen any improvement for months, Phiten aids you to perform at you peak, he said. That means achieving the goal of what you have been training for—or even a little bit more, said Fujitan.

“There could be some underlying reasons you couldn’t perform at your peak. Maybe your muscles get a little stiff after a while, or some old or lingering injury begins to hurt a little bit, or begin to feel a little tired,” said Ronaldo Colmenar, GM of Seemi, the local distributor of Japan-made Phiten.

Colmenar said when circulation is improved, oxygen flow increases in the body. When oxygen increases in the body, muscles become more relaxed. When this happens, the energy expelled during activity will be the closest to your personal best level. Simply put, it maximizes your potential.

A swimmer in the Philippine Team training for the SEA Games, said Colmenar, wears the necklace as an anklet because he often feels like getting a cramp just before his last lap. Colmenar said the athlete has had none of the pre-cramp syndrome since wearing Phiten.

The mere feeling of being down, of feeling not good about yourself, means an imbalance of body ions has already occurred, Colmenar said. That’s how important it is to restore balance in your body, he said.

“This is not just for athletes or sports enthusiasts. This is a lifestyle choice,” Colmenar said.

Colmenar said he has been suffering from carpal tunnel syndrome for years; he couldn’t use the computer without experiencing pain. He taught himself, he said, to function using just one arm until he began using a Phiten bracelet three years ago. Since then, he’s been able to function normally, and has never taken the bracelet off his wrist. We let our colleague try the Phiten bracelet. She has CTS, has been on painkillers and has been wearing a wrist brace not only when she wrote but also when she slept.

The first minute or so after wearing the Phiten bracelet, for the first time she felt a surge of pain from her wrist to her shoulder. Then, just as suddenly, the pain disappeared. Today the bracelet is all she wears, and needs.

“You can check our website (www.phitenphil.com) for testimonies from our consumers. Their stories are incredible. I used to manage a sports equipment and apparel company before Phiten. I would not have risked my reputation if I knew this product to be a scam,” Colmenar said.

There are limitations, of course, as to what Phiten products can do. Fujitan and Colmenar said some people approach them with impossibly high expectations.

“We are not claiming we can cure diseases. Some families with cancer-stricken relatives seek out our help. I think many people become desperate for solutions and cure when every possibility has already been exhausted,” said Fujitan.

The necklaces can help relieve chronic stiff neck, tense shoulders, fatigue, and even improves shoulder and arm flexibility, as demonstrated by volunteers from the media during the press conference. Fujitan said they also help you relax your mind, especially before making presentations during meetings and events.

“We encourage people to drop by our stores and try out the products themselves. Our sales personnel are well-trained and will guide you on how the product works in your body. Feel the results for yourself—instantly,” said Colmenar.

Other products available are Phiten apparel, supports and guards, tapes and lotions, foot care like insoles and socks. Phiten has branches at the Shangri-La Edsa Mall, SM Mall of Asia, Tiendesitas, Robinsons Galleria, BF Homes, Kalayaan Avenue in Makati, and Ayala Center Cebu. It also has kiosks at all SM and Ayala Malls in Metro Manila.