3 women I look up to | Inquirer Lifestyle ❮ ❯ 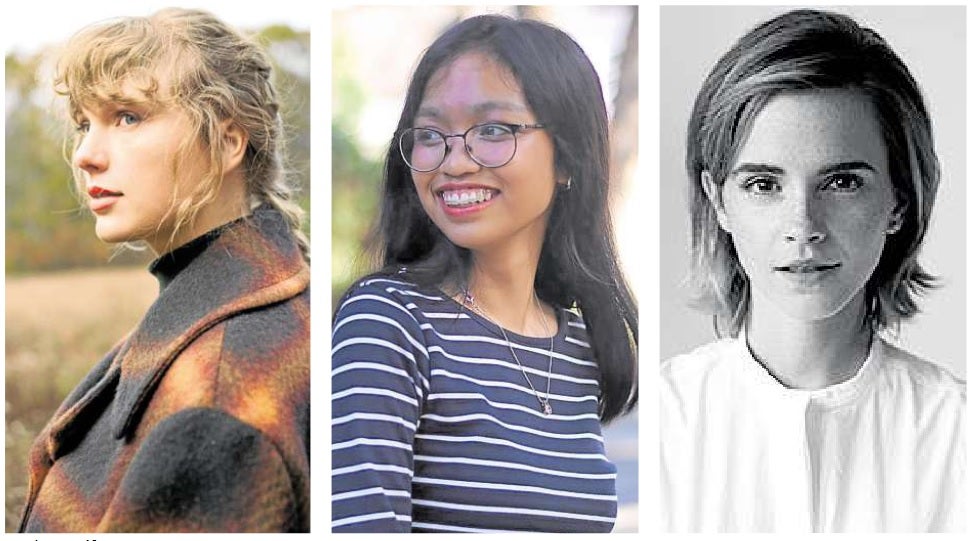 3 women I look up to

In the early 2000s, when women empowerment and feminism was already a thing, it wasn’t as progressive then as it is today. Younger me would have loved to live in a society where people wouldn’t tell you “you can’t do this particular thing because you’re a girl,” or “stop being so ‘boyish,’ you have to be more ‘lady-like.’” Looking back, I think I could have done so many more amazing things, if only the world wasn’t a very sexist place. (I could have been a professional martial artist or a basketball player. The possibilities are endless!)

Today, as with many others, I am an advocate of feminism and women empowerment, and I do my best to speak out against misogyny and the patriarchal system. I am proud to say that these women made me the strong and independent gal that I am today.

The woman who taught me that no matter how hard you fall, you can always reclaim yourself and stand up again: Taylor Swift

After getting caught up in controversies involving Kanye West and Kim Kardashian, Taylor Swift disappeared for months from the spotlight, with all of her social media accounts wiped clean as well. In later years, she would reveal that she took this hiatus as she felt that “everything was spiraling out of control” and she needed time to figure things out on her own, and to reclaim herself once again.

When she returned from her break, she came back stronger and better than she ever was, and based on the lyrics of her latest songs, and her Netflix documentary “Miss Americana,” she realized that sometimes it’s okay to take a step back from everything, do a little soul-searching, and come back up with a stronger foundation.

When I was in junior high school, I experienced a lot of challenges as well, and I took a gap year from school as everything was becoming so overwhelming. Like Taylor, nobody saw me for months, and it was honestly one of the most tranquil moments in my life.

During that time, I realized that most of the pieces that make up my being are pieces that came from people that I met throughout the years. And while that can be a good thing, it can also be bad, as some of those influences were starting to overshadow my identity and individuality.

Taking a step back helped me build a stronger foundation for the person that I am today. Until now, Taylor is still one of my favorite artists (and my No. 1 artist on Spotify as well). She also taught me that whenever someone tries to bring you down, you don’t always need to retaliate. Sometimes, the best retaliation is no retaliation at all.

I’ve experienced my fair share of bullies and “mean-girl-eque” type of people in my life. In Taylor’s album “Evermore,” a line from the song “Long Story Short” struck me: “Past me, I want to tell you not to get lost in these petty things,  Your nemeses, will defeat themselves before you get the chance to swing.”

I’ve always kept that in mind whenever I come across any person who tries to bring me down. People who try to bring you down are never worth your time; it is always the people who you love and care about that need your attention.

Taylor now keeps her circle small, and her life now is more private, but it’s full of sincerity, genuine friendship and love. You don’t need a big circle of friends or to be in the spotlight to leave an impact or to be happy. You just need to be real to others and to yourself.

A woman who made me realize that I love writing: Brin Isaac

Brin Isaac and I were classmates for only two weeks, but she became one of my most favorite people of all time. She’s very very passionate about writing (I might say she even writes better than me), and she is the president of TomasinoWeb, the premier digital organization of University of Santo Tomas.

There was a time in my senior high school year when I was in too deep in my writer’s block that I sort of started to hate writing; but Brin’s passion is contagious. I would browse her blog sometimes, or read some of her poems, and it would spark up an idea or two.

Aside from being a writing buddy, she’s also one of my go-to secret keeper for topics ranging from tsismis to crushes. Brin is very headstrong, and she always likes to fight the norms and be different, and I admire that so much about her.

She’s unapologetically herself, and that’s what I also aspire to be. I’m usually very concerned about my image and how people perceive me, which makes me want to cover up my true self because I’m worried how others would react. I would censor my personality, and sometimes, even censor my words and my writing for fear of what other people may think. But seeing how Brin embraces her true self makes me want to do the same as well. I may not be 100 percent there yet, but at least I’m getting there, all thanks to the guidance and inspiration of a good friend.

The woman who taught me to stand up for others: Emma Watson

Aside from being an amazing actress, Emma Watson is also an advocate, and was named United Nations Women Goodwill Ambassador in 2014. She dedicates her efforts to the empowerment of young women and was a spokesperson for the UN Women’s HeForShe initiative to promote gender equality. She continues to advocate for fair trade and organic apparel. She’s also an ambassador for Camfed International, an organization dedicated to educating girls in rural Africa.

Growing up, I admired her for being Hermione. Now, I admire her as Emma, a strong-willed woman who uses her platform and influence to give voice to those who are barely heard by society. Emma has also started various causes under her name, such as a feminist book club called “Our Shared Shelf” and she travels around the world to promote her advocacies.

I aspire to be like her, to continuously stand up for those who are oppressed, and shed light to issues that aren’t given that much attention in the mass media. I hope to one day start causes and form organizations as well, and be able to make a long-lasting impact on society.

We all have role models, and the women I just mentioned are just a few of those who made me the person that I am today. But we must always remember, it is not enough that we look up to someone; we must strive to embody what makes them admirable to us.

Is it the things that they stand for? Is it their life story? Their personality? Their job?

Whatever it is, we should let our inspirations, turn us into a person that would then be able to inspire others, so that the legacy of strong women and good people, continuous on to the next generation. As the saying goes: “Here’s to strong women: May we know them. May we be them. May we raise them.” —CONTRIBUTED INQ

The author is a Behavioral Science student at University of Santo Tomas.