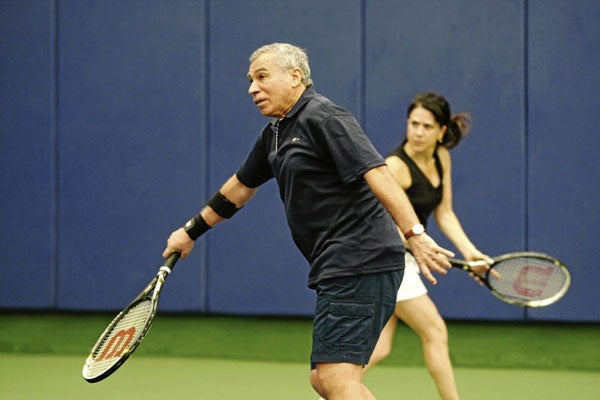 Off the diplo circuit–it’s tennis for these ambassadors 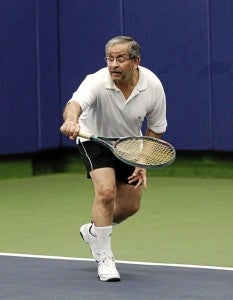 After a certain age, tennis players, recreational or competitive, will favor doubles or team play.

For one, there’s none of the pressure to perform at peak levels as there is the partner for support. It’s also non-threatening since there is no ranking.

That’s why Swiss Ambassador Ivo Sieber, who modestly rates himself as an intermediate player, feels comfortable with former competitive players and fellow ambassadors Roberto Mayorga of Chile and Mohsin Razi of Pakistan.

Frequently seen in business suits and barong and their wives in cocktail dresses, they make no apologies about looking sweaty in their soiled tennis clothes.

The Mayorgas are sports lovers. The Chilean ambassador has been playing tennis for more than 40 years and was a Class A player at his peak. 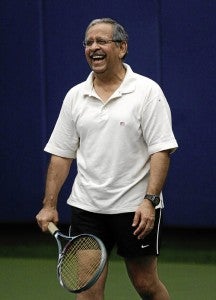 He met his future wife, Paulina, then a student, when he was teaching law at the University of Chile. Their dates included him giving her tennis lessons. The sport has strengthened their bond.

Since tennis could be a lonely sport, playing with his wife and children brings a certain reassurance, says Mayorga, who is modest about his trophies and former ranking. “It’s better to be pro-active with the family.”

When a hip replacement forced him to slow down and a titanium rod inserted on his left hip, his doctor advised him to do doubles since a singles game is too strenuous. Although he claims he’s lost some power and speed, Mayorga and Paulina still win most of the matches with an average of 6-2, 6-1.

Pakistani Ambassador Razi acquired the sport from his father who was champion of a tournament in Quetta, Balochistan. The elder Razi won a trophy in Lahore’s Gym

Khanna, the equivalent of Manila Polo Club, which was established during the British Raj. A generation later, the younger Razi received a trophy from the governor. The club manager said with pride that he knew the elder Razi and that the son was following in the footsteps of the father. It’s Razi’s most treasured trophy, because to him it signified the passing of the torch.

Razi then joined the foreign service and was posted in Europe and the US, in the meantime losing touch with tennis. When he came back to Lahore to study international politics and relations, the institute required the students to take up a sport to keep stress levels low. Razi picked up his racquet again.

During his early months in the Philippines, Razi’s friends from the Asian Development Bank encouraged him to play golf because the Philippines offers beautiful courses and facilities at a good price. There he met Indonesian Ambassador Kristiarto Legowo, also a mean tennis player.

“He (Ambassador Legowo) is young and fit. He plays power shots. (Australian Ambassador) Rod Smith is over 6 ft and his service goes like a rocket,” says Ambassador Razi.

Mayorga adds, “Service is very important. The Indonesian ambassador is consistent, which is important. Tennis is about statistics—how balls go inside. You may have strong strikes, but if half of your balls go out, then that can be a problem.”

The players admire the Mayorgas. Of the Chilean ambassador, Razi says, “He returns the shots. The main things in tennis are speed, precision and sending the ball where you want to go, which is over the net. You should keep your opponent guessing. He makes good drop shots that make people run.” 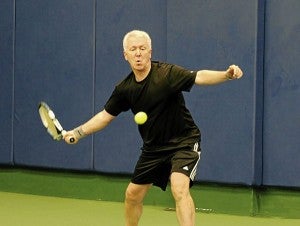 Says Ambassador Sieber, “Roberto has a very good technique and feeling for the game. He knows how it develops and anticipates. You can tell he’s got experience.”

Gracita Tolentino-Sieber observes, “He places the ball very well. The one-hand backhand is consistent. Paulina’s service is very good. I’ve played with other diplomat’s wives. We hope it will become popular if we spread the word.”

Ambassador Sieber has been playing tennis on and off for 30 years. He picked up the sport when he was posted here. He usually plays with his Filipina wife, Gracita, who’s been playing since the ‘80s, and his two daughters.

“I never play in tournaments. I just do it for fun,” he says. “There is the eye-body coordination. It keeps you sweating and the heart pumping.”

On the other hand, Gracita joined fun matches when her husband was posted in London. “The only thing is the stop-and-go movement which is not the best for your knees if you have problems,” she says. 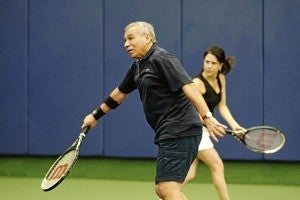 The players have varied opinions about Colegio de San Agustin’s court, which is one of the newest and best in town.

“In Pakistan, we have grass courts, cemented hard courts and clay courts, never this kind of turf. This court is a new experience for me. It’s a bit slow, so you have to run and exert more,” says Razi.

Sieber adds, “I prefer a sand turf. It’s easier on the joints. This is a little bit hard.”

However, Paulina finds the court here a bit faster. “I like it. It’s less painful on the knees.”

Ultimately, the diplomats and their spouses play tennis to be fit for life. Studies reveal that people who train correctly can still develop muscle and build brain cells into their 90s. Although they admit that aging makes the work more challenging, these diplomats and their wives say tennis keeps them hale and happy.

The sudden starts and stops in tennis, stretching for overheads and serves, trouncing and laying out for wide shots—all test the body’s agility. Being flexible is key to producing smooth tennis strokes.

And, of course, tennis is also a social game.

“We’ve made lots of friends, real relationships, and it makes you feel younger,” says Paulina.

“My ambition is to be as good as they are,” says Sieber on his friendly opponents.