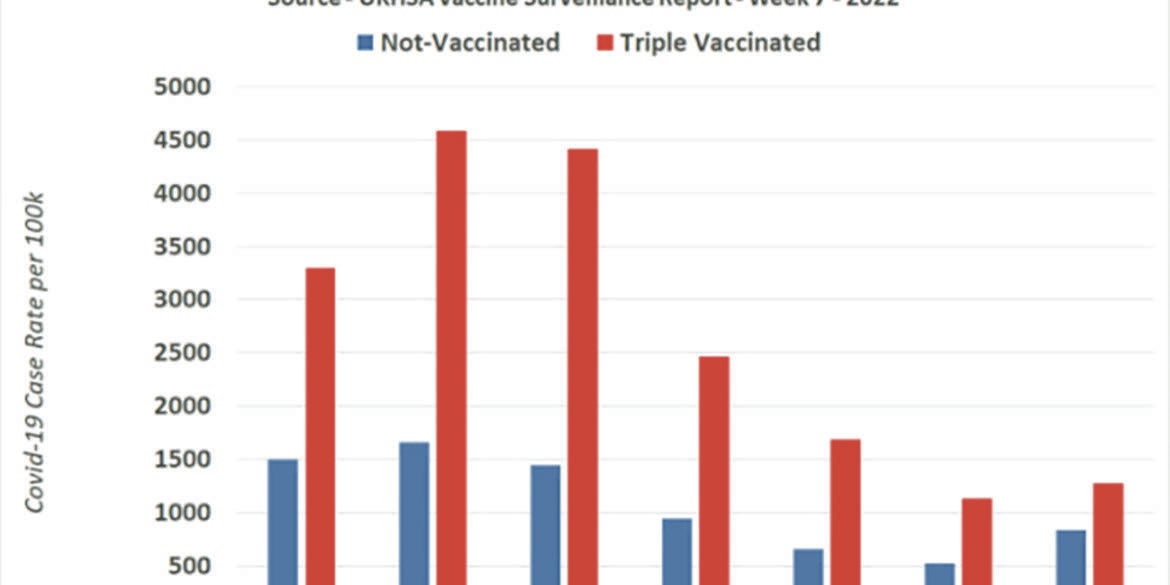 With Omicron as the dominant variant in the United Kingdom, the triple-vaccinated appears to have a significantly higher risk of getting infected compared to the unvaccinated. This same pattern has been maintained up to the first week of March. Source: United Kingdom Health Security Agency

In last week’s column, we pointed out that considering the current prevailing factors—predominance of the Omicron variant which causes relatively mild disease (even asymptomatic in many instances), low positivity rate indicating very low risk of getting infected, very low risk in children and healthy adults to develop severe COVID-19, dismally low effectiveness of vaccination in preventing Omicron infection, and previously undisclosed confidential reports now coming out detailing the kilometric list of side effects or adverse events associated with vaccination—the benefit-harm balance from vaccination appears to be tilting toward the negative or harm side.It may be prudent for our health officials to pause mass vaccination and reevaluate the whole situation. Instead of issuing general motherhood statements that mass vaccination is for the common good to save our economy and our nation, health officials should present risk-benefit estimates for every age group. Different strokes, for different folks, as they say.

Getting the jab may still be beneficial for the elderly and those with compromised immune systems, but potentially harmful for everyone else. Data from other countries seem to be suggesting this. So, let’s see if our own local data can still justify our vaccine mandates and firm resolve to implement it.Abundance of caution

It’s never too late to exercise an abundance of caution, which we seemed to have recklessly thrown out with our zealous obsession to get everyone, including children and healthy young adults, vaccinated and boosted. For those who’re still doing fine with two or three jabs, we recommend you don’t push your luck too far. If we do this—submit ourselves to repeated jabs, we’re like paddling our boat further into the big, dark unknown.

With unsettling belated data of excess deaths three times the number of those confirmed to have died from COVID-19—plus increasing reports of sudden cardiac deaths in the population, even in young athletes—we need to find out first what might be causing these excess deaths. Dismissing them outright as pandemic-related and beyond our control is a grave sin of omission and negligence.

Knowing that our health officials are doing their due diligence in evaluating our unique situation based on analysis of our own data, rather than just listening to foreign and local experts’ advice, can be reassuring that their decisions and policies are guided with appropriate and best available data.

This increases our trust in their capability to lead us out of this pandemic. This can address the current dichotomy of trust or mistrust in our government officials, wherein the public still maintains its high trust in the President, but has the opposite regard for some key people he has delegated to bail us out of the pandemic.

COVID-19 is a dynamic problem and it’s perfectly acceptable that a country’s antipandemic response constantly changes depending on prevailing circumstances. It may swing like a pendulum going from one end to the other extreme end.

In the United Kingdom, for example, Prime Minister Boris Johnson pictured an extremely gloomy picture of the impending Omicron surge in mid-December of 2021, calling it a “tsunami of infection” that could overwhelm their health-care system. Booster vaccination was ramped up to address the Omicron emergency.

But barely a month later, they ditched their vaccine mandates and exhorted the people to learn to live with the virus, just as they do with the ordinary flu virus. And this call was made when they still had more than 100,000 new cases per day.

It was a calculated risk, but they were confident in making this 180-degree turn in their decision based on a thorough analysis of their local data. Although the cases peaked at more than 200,000 new cases daily, the number of cases requiring hospitalization was still much smaller compared to that during the Delta surge, peaking at just a little over 50,000 cases daily. The death rate was also much, much lower.

The ditching of the vaccine mandates came also as a surprise, and other European countries are following suit. We believe we’re now seeing the twilight of vaccine passports and green passes, in other parts of the world, but not quite so in our country, where the push for mass vaccination is still being implemented with remarkable vigor and resolve.

The growing public pushback on vaccine mandates in other countries, aided by court rulings declaring vaccine mandates as unconstitutional and against inherent human rights are definitely major factors for the diminishing enthusiasm for mass vaccination; but we believe the decision makers in these countries are taking serious note of the dismal lack of effectiveness of currently available vaccines in preventing infection by the Omicron variant.

Data out of the United Kingdom since the start of the year shows that triple-vaccinated individuals have more than twice the risk of getting infected with COVID-19 than unvaccinated individuals. This has been consistently shown in all age groups, including the elderly. It’s not because there are less number of UK residents who are unvaccinated; the infection rate was based on every 100,000 population.

This negative or paradoxical lack of efficacy of triple vaccination opens questions on the potential harm of repeated vaccination. We would wish that our health officials study this seriously before proceeding blindly with our mass vaccination campaigns.

The belated release by the US Food and Drug Administration (FDA) of hundreds of thousands of pages of confidential documents related to the licensing of an mRNA vaccine is another factor we believe has contributed to the ditching of vaccine mandates in other countries.

The US FDA is releasing these documents not voluntarily, but compelled by a federal court order resulting from the lawsuit filed by a group of medical scientists, practitioners and researchers who invoked the Freedom of Information Act.

The FDA tried to convince the judge to give them until 2096, (you read it right, until the year 2096) to sort out the voluminous documents and release the requested information particularly on the side effects or adverse events that occurred after vaccination.

The FDA bargained to release only 500 pages a month, but that means it would take at least 55 years to release all of the 451,000 pages of the documents. By that time, the data would have been irrelevant. The federal court judge would not accept any of the FDA’s argument and ordered them to produce 55,000 pages per month.

The released documents so far generate more questions than answers on the issue of safety of the mRNA vaccine in question. Part of it is a 38-page safety surveillance report during the first three months after the vaccine was allowed emergency use authorization. It details all the adverse events that have been reported by those who received the vaccine.

Many of the reported reactions or adverse events are rare and quite unknown to most practicing physicians including myself. So, if they’re not well known, how can the average physician report them should they encounter them in their patients who had received the vaccine? We believe these reported adverse events should be considered red flags until we have convincing data proving that they’re not.

Some would argue that these adverse events or reactions are not necessarily due to the vaccine, and it was just coincidental, rather than causal in relationship. That may well be true, but the opposing view is equally tenable.

How can we be so sure that it’s really not vaccine-related? A cardinal rule in the practice of medicine is “Primum non nocere (First, do no harm)” and we have to have reasonable certainty that any form of treatment a physician administers is safe and will not cause any harm on the patient. In the event of an equipoise, wherein the chances of risk or safety is unresolved, it’s best to avoid administering the treatment.

Since March of last year, we have been proposing to withhold vaccination except in the elderly and in the immune-compromised, until such time that we can be assured of the safety of the vaccines. Rather than exercise caution for lack of data on the safety of vaccines, we opted to take the opposite stance and boldly recommend it even in healthy children and young adults.

We hope the finally disclosed data in the hands of the US FDA makes us realize we took a gambit that may not be worth taking. It’s never too late to pause and wait on the safe side, rather than compromise hundreds of thousands of lives.

Actually, practically all the health agencies and regulatory bodies all around the world have been strictly adhering to this cardinal maxim on treatment safety in approving treatments for mass administration. It’s really a big source of bewilderment that the pandemic has suddenly relegated this maxim to the background.

It’s about time we look at our own situation in our country, analyze whatever local data we had gathered; and decide for ourselves what to do to permanently bail us out of this pandemic. This is a more rational strategy, rather than just take hook, line and sinker the recommendations given us by international health agencies and countries who think they know our local situation better than we do. This is what we call as a pied-piper response to the pandemic.

The music from the pied piper’s flute has indeed put us all on a prolonged hypnotic trance. We sure hope we could wake up in time.