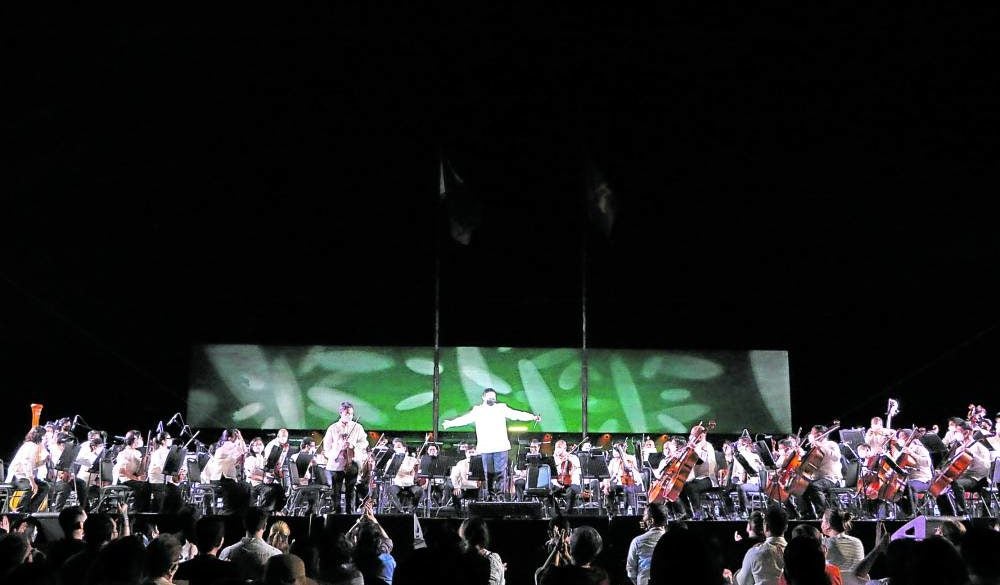 Very live, very loved: The PPO is back

In 2020, six months into the pandemic, Cultural Center of the Philippines (CCP) president Arsenio “Nick” Lizaso launched the CCP’s virtual arts outreach program with a promise: “Nasaan man kayo, kami sa CCP ay laging makakasama ninyo (Wherever you are, we at the CCP will always be with you).”

And for well over a year, “Sining Sigla” fulfilled his office’s commitment to bring the CCP closer to Filipinos. There were recorded jazz concerts, kundiman, even a puppetry show—all well produced and well received.

But no recording fully captures the beauty and power of a live performance, which made Philippine Philharmonic Orchestra’s (PPO) concert at the CCP grounds on March 11 a real cause for celebration. Hundreds filled up bleachers on Roxas Boulevard to enjoy over two hours of world-class entertainment that was absolutely free.

With the iconic building and the Manila sunset as its backdrop, PPO began with classics such as Von Suppe’s “Light Cavalry Overture,” Offenbach’s “Orpheus in the Underworld” and Bizet’s “Carmen” Suite—all of which had sections familiar to Filipinos through film or television ads.

As she would throughout the evening, concert host Mica Pineda preceded each piece with a description of its theme, allowing even those familiar with classical music to appreciate it more.

Broadway shows that made it to the movies have the most recognizable songs; the crowd hummed “My Favorite Things,” “Try to Remember” and “People” when PPO played “Broadway Tonight.”

Lara Maigue then gave them a taste of opera when she performed the aria of the “doll” Olympia in Offenbach’s opera “Les Contes d’Hoffmann” (“arguably the most difficult piece ever written for soprano”)—complete with doll motions—which earned the loudest applause of the evening.

The program reverted to musicals with “Miss Saigon” duets performed by the seemingly ageless, still amazing Isay Alvarez and Robert Sena, both members of the original London cast. The set’s highlight, though, was Bo Cerrudo’s rendition of the iconic “Phantom of the Opera” solos: His voice melded so beautifully with the orchestra that it was a genuine Broadway experience for the audience.

Closest to our hearts

But this is, above all, a show about music closest to our hearts. PPO began the final set with “Ang Katutubong Atin,” a medley of Filipino folk songs arranged by Lucio San Pedro.

Alvarez and Sena then returned to the stage for beautiful solos: “Ang Tangi Kong Pag-ibig” by Constancio Canseco de Guzman, acknowledged dean of Filipino movie composers and musical directors, and “Bituing Marikit” by Nicanor Abelardo, the composer after whom both the CCP Main Theater and the University of the Philippines’ College of Music were named.

Maigue and Cerrudo followed with the modern “Minsan Lang Kitang Iibigin.” After hearing the orchestral version, one may not want to listen to that ballad any other way.

It was then time for PPO’s big number: the Manila Sound suite. The crowd in the bleachers sang ’70s standards “Ipagpatawad Mo” and “Mr. DJ,” while “Rock Baby Rock” and “Awitin Mo at Isasayaw Ko” had even the expatriate guests clapping and swaying in their seats.

This was a triumphant return to the concert stage for conductor Herminigildo Ranera and PPO. The acoustics were excellent, the weather cooperative, the audience appreciative of the entire experience. Those who missed it can view the recording on the CCP Office of the President’s Facebook page and get details of the show’s next dates as it tours other key cities in the Philippines in 2022. —CONTRIBUTED