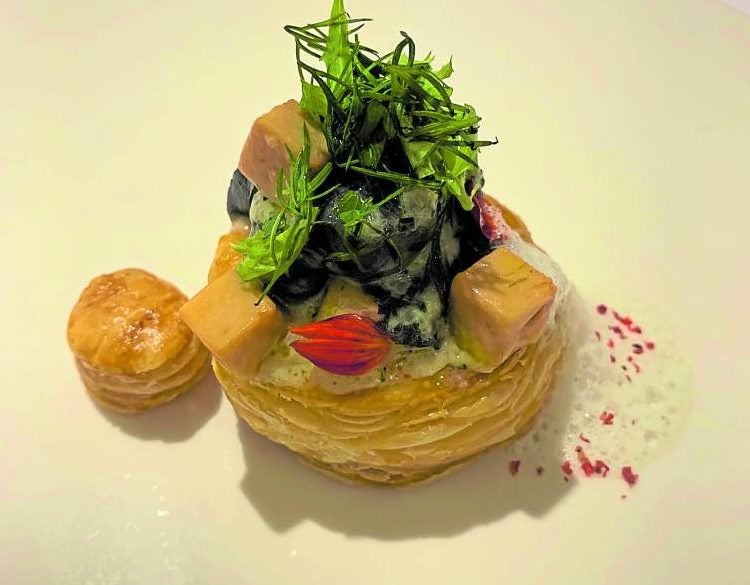 It was a powerhouse collaboration not to miss, as two female chefs who each hold stellar credentials were at the helm.

There was Bettina Arguelles, a mother of two who, at age 30, pursued her passion for cooking by enrolling in a culinary school in Singapore surrounded by students almost half her age.

Given the odds, Arguelles pulled her weight, and with professional experience in establishments like the iconic Fullerton Hotel, Marina Bay Sands and Db Bistro Moderne by chef Daniel Boulud in New York, managed to bag not just a World Gourmet Awards Female Chef of the Year 2019 recognition, but also the prestigious title of being the first-ever Filipina executive chef in a five-star international branded hotel in the Philippines.

And then there was Miko Calo of Metronome restaurant. After finishing an education degree and training at internationally recognized culinary arts school Ferrandi Paris, she worked her way up the ranks, from being a stagiaire at the La Table de Joël Robuchon to a junior sous chef posting at L’Atelier de Joël Robuchon Singapore.

Mindanao-born Calo eventually returned to her home country and, together with her cousin RJ Galang, launched the Underground Supper Club, a monthly pop-up with a thematic tasting menu. Then in mid-2019, she started running the kitchen of the French restaurant Metronome that earned a range of distinctions—from most anticipated to the best.

“The idea for the collaboration came to mind deep in the lockdown and we were, as an industry, taking a big hit,” says Arguelles, the executive chef at Sofitel Philippine Plaza. “I wanted to do something to show solidarity and resilience within the industry and I could not think of a better chef to do it with than Miko.”

Having known each other since their days in Singapore, Calo was quick to seal the deal. The successful dinner happened in Arguelles’ turf back in November. They were supposed to follow it up with another, this time in Metronome in January, but Omicron hit.

They were finally able to hold it last March 25. “It was actually a blessing,” confesses Calo, “as it gave me time to rethink the menu and do some R&D (research and development).”

The women agree that it was a seamless and easy job, especially since, as Arguelles explains, they “freakishly share the same wavelength.” She adds, “We enjoy picking each other’s brains. I think the main challenge was our schedules, but apart from that, the experience both times was very enriching not only for us but for our teams as well.”

Apart from the amuse-bouche—an exquisite mini eclair filled with a foie gras parfait, and a pork and game terrine with cacao and quince puree—which they served together, the chefs composed their own dishes that were reflective of their brands and served them alternately.

Calo jumpstarted her repertoire with a delicate potato vichyssoise studded with caviar and braised potatoes. She also sent out a seared scallop number with truffle Comté cream and leek puree and a perfectly cooked venison fillet with a boldly flavored red wine sauce, and the signature Robuchon potato mash.

Her desserts were heavenly, especially the compressed watermelon tartare with cassis foam, but it was the escargot fricassee vol-au-vent which the chef liked the most from her lot.

“It was for me a good representation of what I try to do, which is Franco-Filipino,” Calo says. “The escargot, vol-au-vent and foie gras are classic French, but the fricassee of escargot and cream were flavored with ginger, garlic and local shallots, which is taken from ginataang kuhol.”

The menu of Arguelles was equally inspired and inspiring, making for a 10-course tasting menu that progressed with ease, and not with one chef intentionally edging out the other.

She served a clean-tasting veal tenderloin tartare made rich with cured egg yolk and sea urchin, as well as the memorable sauteed monkfish cheeks with razor clams, sunchoke and brown butter emulsion.

Her white chocolate semifreddo with basil chiffon and pistachio crumble was an interesting play on textures and savory flavors that danced with the sweet, but it was the sous vide pigeon breast that sliced like butter, accompanied by a cabbage parcel and crispy bonbon that inevitably had me, and many other guests, sighing with satisfaction.

This was a four-hands dinner that was not out to show what female chefs can bring to the male-dominated table. That’s a weary argument that has long been resolved in their favor. It was more of a celebration of the skill, sophistication and savvy of Arguelles and Calo. And on that Friday night, we not only acknowledged their talent, we revered them. INQ