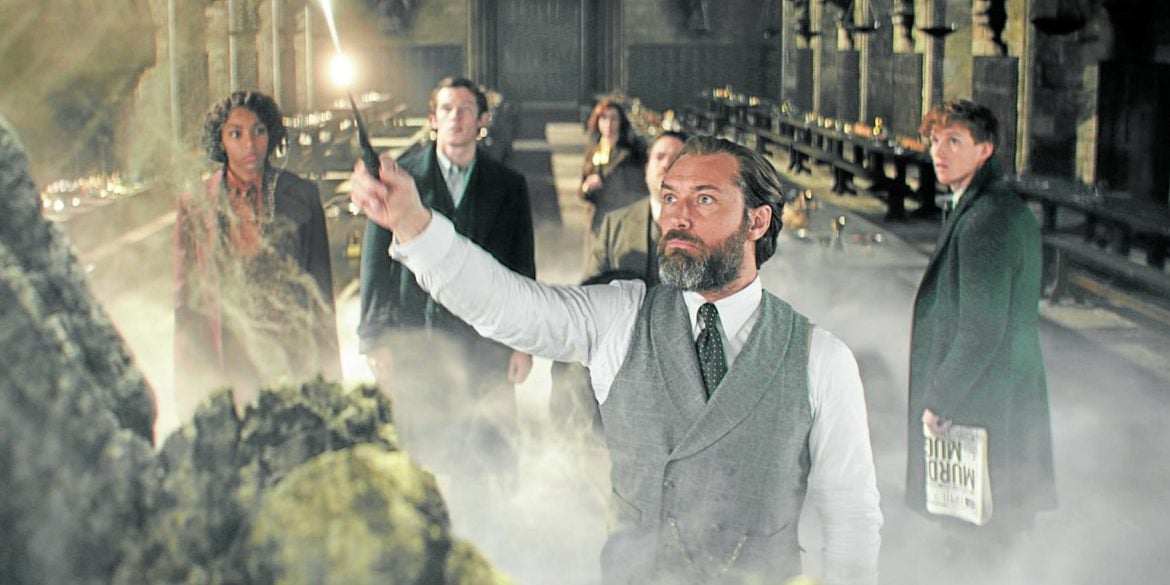 Above: The Hogwarts headmaster continues his other career as spymaster in “The Secrets of Dumbledore.” —WARNER BROS. PICTURES

The Wizarding World is Back in ‘The Secrets of Dumbledore’

It’s been four years since “The Crimes of Grindelwald,” the second installment in the planned five-film “Fantastic Beasts,” the “Harry Potter” prequel series set in author JK Rowling’s Wizarding World. Ordinarily Warner Bros. would like these to come out every two years, but a less-than-rapturous reception, deciding to recast Johnny Depp (the main antagonist of the series!), and oh yeah—a pandemic—have led to this twice-as-long delay. But the time may have done the producers good, as “The Secrets of Dumbledore” marks an improvement over “Crimes,” and marks some welcome additions to the team, both in front of and behind the camera.

At the end of “Crimes,” Gellert Grindwelwald (now played by Mads Mikkelsen) had taken Credence Barebone (Ezra Miller) under his wing and even convinced Queenie (Alison Sudol) to come aboard his fascism train, leaving the plucky crew headed by Newt Scamander (Eddie Redmayne) in the lurch. At the beginning of “Secrets,” the team have gone their separate ways: the nonmagical Jacob Kowalski (Dan Fogler) back to his bakery, Newt continuing to care for his fantastic beasts and Tina (Katherine Waterston, who mostly sits this movie out) appointed head of the American Auror Office.

The film kicks off with a meeting between Albus Dumbledore (Jude Law) and Grindelwald that’s the Wizarding World equivalent of the diner scene between Robert De Niro and Al Pacino in Michael Mann’s “Heat”: two of the best of their era sizing one another up, unstoppable force meeting immovable object. Except here, the prior relationship long hinted at is made canon. Knowing what must be done, Dumbledore gathers “the team” together in a not-caper to thwart Grindelwald’s political aspirations.

Among the welcome additions is Jessica Williams’ Lally Hicks, an American professor Dumbledore tasks with getting Jacob back in the fight. A more-than-capable combat witch, Williams brings a swagger and confidence to the role that makes her stand out. Mikkelsen, taking over from Johnny Depp, is a more menacing Grindelwald, steely and sinister like a coiled snake. Mikkelsen brings his considerable charm, in a timely plot where he looks like he’s going to win an election and become leader of the magical world, thanks to corruption and a campaign of disinformation. Sound familiar? Also tackled are Queenie and Credence’s misplaced loyalties, brought about by lies, manipulation and Grindelwald’s grooming tactics.

Behind the camera, “Secrets” also heralds the return of screenwriter Steve Kloves. While Rowling penned the first two movies solo, Kloves cowrites this one, and as screenwriter of seven of the eight “Harry Potter” films he feels right at home, with a sharper grasp of a sprawling cast of characters. It’s actually the sheer size of the cast that can make things feel bloated and unwieldy at times: like the “Star Wars” prequels, it often strikes the viewer to ask who is the main character here, since the revolving door of episodic scenes can scatter focus. Some get the short end of the stick, like Callum Turner playing Newt’s brother Theseus, whose biggest role in this movie is getting captured and rescued. The psychological wounds of Credence and Queenie also seem to get underplayed: They are more or less expediently resolved, and it feels like we could’ve stood to see more of that healing, since at the end of the film, none of the main characters seem to have actually changed or grown. Is that the curse of the central part of a pentalogy? While circumstances may lead the plot to a stalemate, it shouldn’t be so for the players’ character growth.

It’s unfortunate, too, that perhaps the circumstances of shooting during a pandemic have hampered their ability to use more practical locations. One hopes it has nothing to do with the convenience of special effects (given a studio’s budget), especially when they don’t feel up to the magic (excuse me) of prior Wizarding World entries. Much of the film is murky and foggy, and if you’re in a theater with poor projection, it’s like trying to watch through soup. The color and vibrancy of the milieu a generation grew up with is much missed.

“The Secrets of Dumbledore” is an improvement over “Crimes,” though still feels burdened and scattershot, but points an optimistic way forward: With the endgame in sight, if the filmmakers can ratchet up the proceedings dramatically and with a more tightly controlled focus, “Fantastic Beasts” can deliver a satisfying conclusion that should remind us why we like visiting this world.