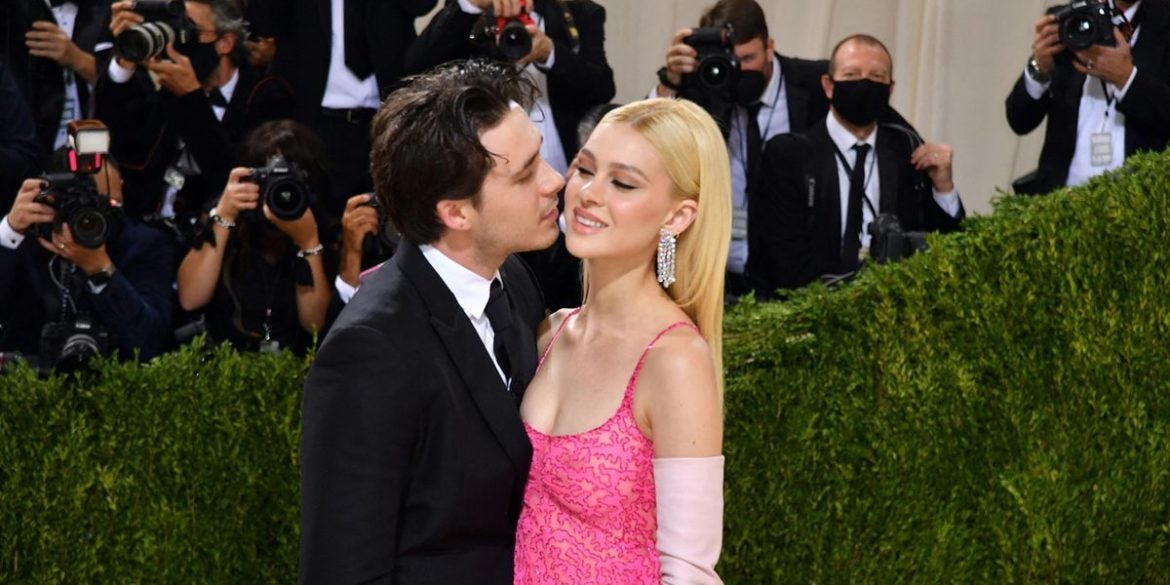 Everything ’90s about Brooklyn Beckham and Nicola Peltz’s 2022 nuptials

Golden child by two of the ’90s most notable individuals, Brooklyn Beckham, is all grown up. At 23, the model-slash-photographer tied the knot just yesterday with 27-year-old actress Nicola Peltz. The Jewish ceremony was held at Peltz’s family estate in Palm Beach, Florida.

From fashion to beauty and even to decor, we break down everything ’90s about this wedding.

Did Nicola’s dress look familiar? If it did, it’s probably because it followed suit to one of the ’90s biggest bridal trends that were donned by celebrities such as Iman and Carolyn Bessette-Kennedy. A custom piece by Valentino Haute Couture, the beautiful minimalist gown boasted a practically never-ending train that was paired with gloves and Versace’s coveted platform pumps.

#2 Her bridal beauty was inspired by the ’90s supermodel

In an exclusive given to Vogue Magazine, it was revealed that her entire bridal beauty look was inspired by the ’90s supermodel. Chanel make-up artist Kate Lee revealed, “We decided on a very fresh, natural look – barely there but with a few interesting details that will pop under the veil.” Her hair was also inspired by Claudia Schiffer’s signature half-up half-down style.

Grooms have their own wedding trends too! Brooklyn Beckham turned to family friend Kim Jones’ genius to craft his once-in-a-lifetime wedding suit, and Jones did not fail to deliver. A simple but modern piece, the Dior ensemble was tied together with a hanging silver chain and paired with sleek footwear, kinda reminiscent of his dad’s all-white ensemble for his own nuptials back in 1999.

#4 Scary and Sporty spice was in attendance

Mel B and Mel C were in full support as they watched the couple walk down the aisle! The two spice girls members lent their support to Posh’s son and new in-law, partially reuniting the girl group for the first time in a while.