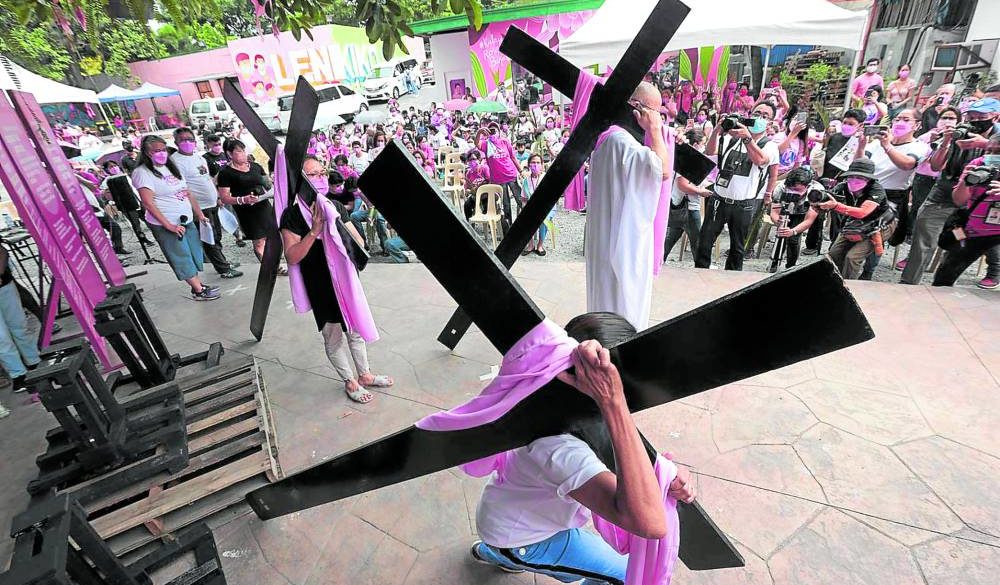 Easter for our country

Whether we deserve it or not, a chance at redemption has been presenting itself, our own national Easter, so to speak. And we better not blow it: Such a chance, if unrecognized and not pursued with human effort to fruition, amounts to nothing. We need to play our part.

It actually began with Leni Robredo’s miraculous, righteous victory in the vice presidential election of 2016, against the same enemy as she has today, for the presidency this time—Ferdinand Marcos Jr.

Her outclassing of Rodrigo Duterte, despite her being marginalized by him through all her term, seems to me only part of the lesson of history and faith we need to learn. And I only hope that Leni’s full emergence as an inspiration to self-reformation is an indication that we are learning our lessons well.

The difference is simply too stark to be missed, for Duterte’s brand of leadership has been a drastic shift from the norm, to put it mildly. He pulled our social, ethical and moral standards down to levels unseen since the first Ferdinand Marcos. Audiences laughed at his crude jokes, were tickled by every cuss word he spat out, applauded his obscene and inane anecdotes. He was the patron saint of crass and crazy.

He shamed us in the eyes of the civilized world. He foul-mouthed US President Barack Obama and the Pope, nay, God Himself, and we only sat passively—the worst case of shock in such a case is no excuse. It seemed as if we had driven the nails into Jesus’ hands ourselves, as we pleaded insanity.

We lost our way

When we allowed him to desecrate the highest office in our land, we only debased ourselves. When we stood by and let injustices happen to our fellowmen, it was like choosing the thief again, instead of Jesus. When he allowed Chinese encroachment upon land and seas, indeed, upon our lives, it was like selling our sovereignty, and for what? Not even one piece of silver! Doubtless we lost our way—big time!

It’s taking a Zelensky from the far side of the world to show us how. He’s fighting to the death, in an extreme example of noble sacrifice his nation follows by force of moral instinct. That’s why Russia is not winning the war.

But we don’t have to look as far as Ukraine. We have our own Leni Robredo.

For us, she has taken up the challenge against the old enemy and its armory of guns, goons and gold. She fights against treason, against corruption, against dynasties and against the modern evil force of trolls. We can’t let her do it alone—she can’t. She needs Kiko Pangilinan beside her and us behind her, her volunteer army. And I must confess I feel lifted higher than I have felt in a long time.

I watch a young man on TikTok pour out his feelings after attending Leni’s Pampanga rally. He came at 7 a.m., seven hours before the start, and was on his feet through the next 10 hours, something he had not done, he says, even for his favorite performers.

But the inspiration, he says, was so infectious and healthy. He observed a competition among the huge crowd itself—a competition to be to better at being good to one another, more helpful, more productive for the cause they were fighting for. He felt his heart almost burst with every act of selflessness he witnessed among the 220,000. Food, water, first aid were there for the asking.

But the people are also thirsty and hungry for good governance, for decent and capable leadership, he says.

This boy, perhaps two generations younger, is almost begging us not to pass up this one chance, on May 9.

My husband and I watch Leni and Kiko’s rallies only online, for now, waiting, hopefully, for the occasion when we can be up to joining these old bodies with those young and warm ones again. Still, just watching virtually, I get goosebumps. The one in Pasig, we thought, was as huge as it could get—until Pampanga!

Everybody noted the positive energy in Leni’s rallies. Many of our family and friends were in the Pasig rally—my 92-year-old uncle and his wife, who live nearby, could not themselves be stopped! I still remember how exhilarating rallies can be, and all I can say for now is, “Wish we were there.”

Again, what’s happening is nothing short of a miracle. But like all miracles, they are not the end in themselves, but only the beginning of conversion and real change, which themselves require human effort for human stakes.

Miracles help renew and strengthen our faith in God, our faith in his love and mercy. What is unique about our relationship with God is that there’s always an Easter waiting for us, no matter how many times we lose our way. INQ