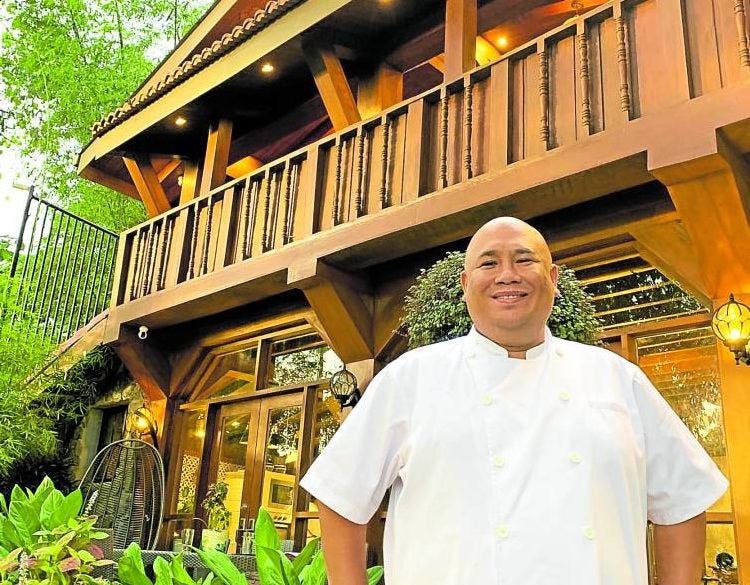 “Chefs are storytellers. And I want to know if there is still something I can say that is fresh to anybody.” That’s Myke “Tatung” Sarthou’s curiosity at play.

For the past few years, Tatung, which has become his moniker, has strayed far from what he was originally recognized for—private dining. Back in 2011, he welcomed guests to his garden café in his Sikatuna Village home for a four-course meal that changed with the seasons and his mood. It ran for two years, until the space was turned into a townhouse by the landlord.

After a couple of restaurant closures, TV shows and food conference talks, he then dabbled in producing cookbooks under his own production and publishing company called Vertikal Creatives, which he opened during the pandemic.

He also started a YouTube channel called “Simpol,” where he shares easy recipes for comfort food dishes such as humbang bangus, chicken teriyaki and maja blanca.

He definitely had a lot on his plate for the past two years. His company became so busy that he had to move to a condominium so he could transform his Quezon City house into their office and cooking studio.

Lush with natural greens and far from the busy roads, it was intended to be an occasional urban escape, but it was just hard to turn down the luxuries it offered, and so it eventually became his new residence.

He had no intentions of opening his place for private dining. “Wala talaga kasi out of the way,” he says. “So ang tagal ko pinag-isipan and mag-decide. I asked friends to come over and see if it made sense and would work.”

Entertaining is something organic to him, and inviting people so he could personally cook for them was nothing new. In fact, that’s how he started in the business. Besides, his home is fit and equipped for it.

The lush garden is a beautiful backdrop for the wooden porch where guests are welcomed with appetizers, a refreshing drink and cold towels. Meanwhile, the dining area, where diners get to sit down and watch Tatung and his team of chefs orchestrate their dishes in the open kitchen, provides pleasant entertainment.

Tatung has admittedly been out of the private dining scene for a long while. “When you fail a lot of times, you become more calculating with the risks. Plus age makes you think if you have enough energy to start all over again.”

But he is not one to back down from a challenge. “If I don’t do this now, I might regret it in the future. Ngayon pa ba ako matatakot sa dami ko nang napagdaanan?”

Like his determination, his tasting menu is bold. Composed of 10 courses, his repertoire is punctuated with regional dishes presented in a more refined form.

There was tinapa mousse inside barquillos, sea urchin kinilaw on banana fritters, and paksiw on a black rice cracker, as well as chicken galantina with raisin jam and adobo chicken liver pâté served with bonete and pan de sal, both made in-house. The soup course, binakol na halaan at kabute, was heated over hot coals and served tableside.

For people whose knowledge of local food is limited to adobo, sinigang and tinola, the menu might feel like a reintroduction to Filipino fare, with lesser-known dishes dotting the list.

There was the Cordillera kiniing or smoked pork and beer-cured pajo mango in the salad.

The seafood number put the spotlight on two Mindanao items—Maranao kiyuning yellow rice and Tausug pianggang made of burnt coconut.

Capping the meal were Cebuano signatures that he included as an ode to the place he grew up in—balbacua, a collagen-rich beef short-rib stew which came with tinigib corn polenta and torta, a type of sponge cake flavored with anise seed, served with kinutil, a hot chocolate made with palm wine and native eggs.

The narrative on how Philippine cuisine is evolving is still being written, and Tatung contributes to the tale by serving a meal that has vastly improved—seasoned with rich experience and exposure—from the time he first did private dining.

His story is one worth tasting.