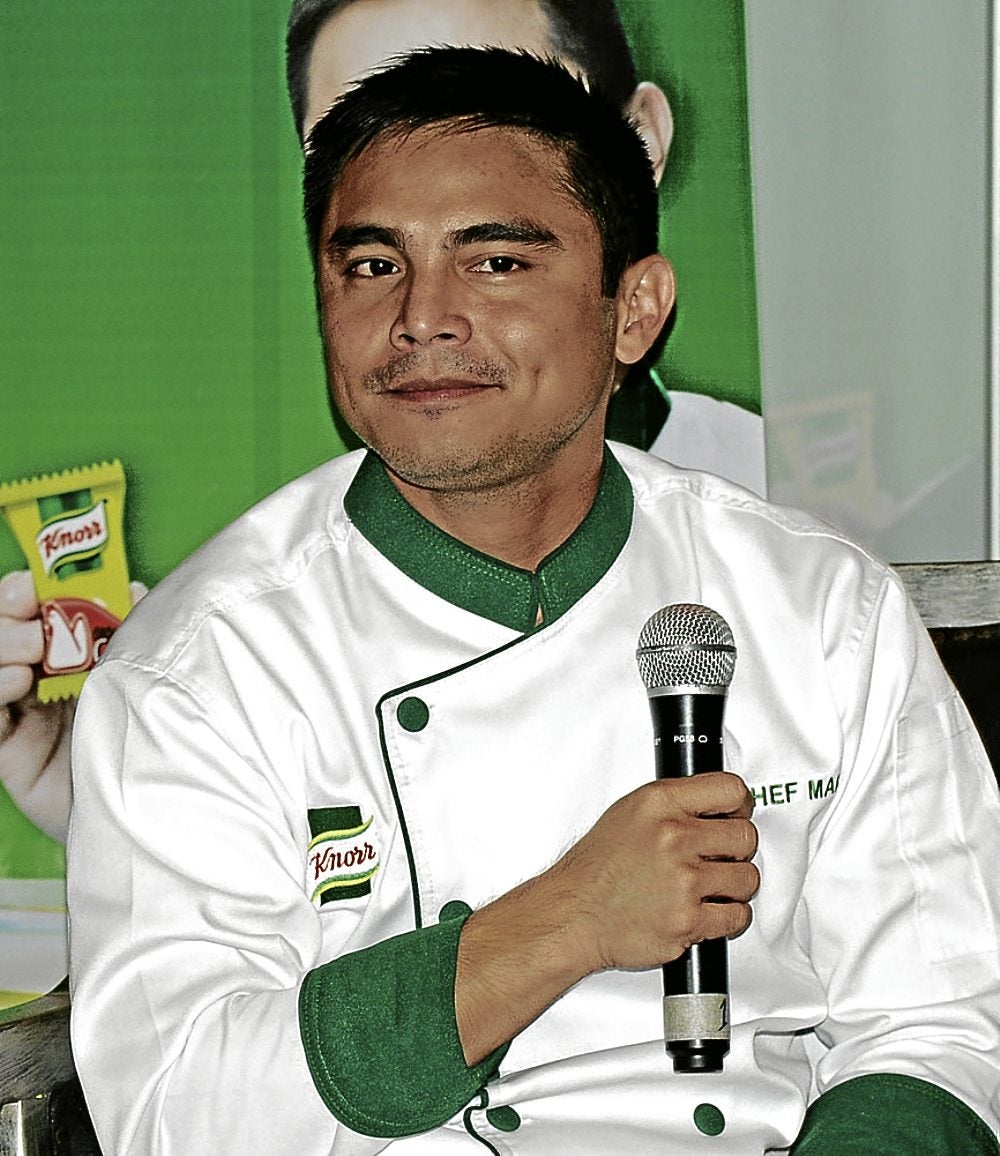 Marvin Agustin is taking on a new role as the newest endorser of Knorr cubes. As such, he gets to wear Knorr’s chef jacket representing the Philippines, and joins a distinguished roster of Knorr chefs, about 200 of them, who encourage people all over the world to use only the best in their dishes.

Agustin, an actor, director, businessman, restaurateur and chef, has become a fixture in the local food arena lately. He took up culinary courses at the International School for Culinary Arts and Hotel Management (ISCAHM) with Norbert Gandler, even when he was already opening his various restaurants around the city.

“I continued my passion for food,” says Agustin. “I didn’t only open a restaurant, I also studied culinary arts to professionalize what I know in cooking. With the help of my partner-friends, I started putting up more restaurants.”

Is he now confident being called a chef?

“I used to be called a lot of things,” says Agustin. “But, it was only when I studied culinary arts that people started calling me a chef. Then, I hosted a television food show, ‘Kitchen Superstar.’ When I did my commercials with Knorr, almost everyone began calling me chef Marvin.”

“Confident, yes, I think I am. I cook professionally for my restaurants now. Some dishes I personally tested and developed. I also cook regularly for my family and friends.”

Agustin recalls living in a small house with his parents and two sisters while growing up.

“Anywhere you go in the house you could see the kitchen,” says Agustin. He could smell what his parents were cooking and see how the food was prepared.

“I was the designated taga-saing. My parents would encourage us to help in the kitchen. Those were my early exposure in the kitchen,” he recalls.

After graduating high school in 1996, Agustin worked as a staffer at ACA Video before joining Tia Maria’s restaurant bar in Alabang as a waiter. It was here that he was discovered by ABS-CBN. And the rest, as they say, is history.

Though he’s been very successful in his show-biz career, Agustin pursued his dream of doing professional cooking and opening his own chain of restaurants.

He idolizes celebrity chefs Bobby Flay and Jamie Oliver. He likes Italian, Filipino and Japanese cuisine. He says he’s in that level where he can already replicate whatever food is served him. His friends always crave for his cocido, a Spanish boiled dish of meat and vegetables.

Right now, he’s focused on keeping tabs on the consistency of the food served in all his businesses.

“That’s the hardest part of running a restaurant, the consistency,” says Agustin, who’s a doting dad to twin daughters, age six years old. “You can’t be good today, and then the next day when the customer visits you again it’s a different taste. But so far, we are managing well.”

With his success story, no wonder Knorr decided to get Agustin as a partner for its products.

“Knorr and Marvin share the same passion for good food,” says Seanta Reyes, Knorr brand manager. “He’s been using Knorr cubes in his house even when he was young. Both professionally and personally, he is a perfect partner for us. He even challenges consumers that he’s willing to give up cooking if they don’t find the Knorr cubes tastier and meatier compared to other seasoning brands.”

As the newest Knorr chef, Marvin shares his expertise with moms and other cooking enthusiasts. He believes in the meaty superiority of Knorr cubes over seasoning granules.

That superiority, says Reyes, has been proven by an independent lab test in Europe, which shows Knorr cubes having at least five times more meat flavor than other cooking aids. The cubes are made from real meat and vegetable extracts.

“My family has been using Knorr cubes from way back. We love soups. My dad would cook misua and use Knorr cubes. It’s nice to promote something that you’ve been already been using for a long time,” says Agustin. “Knorr doesn’t only add saltiness into your soup, it provides the natural taste and flavor of the real meat.