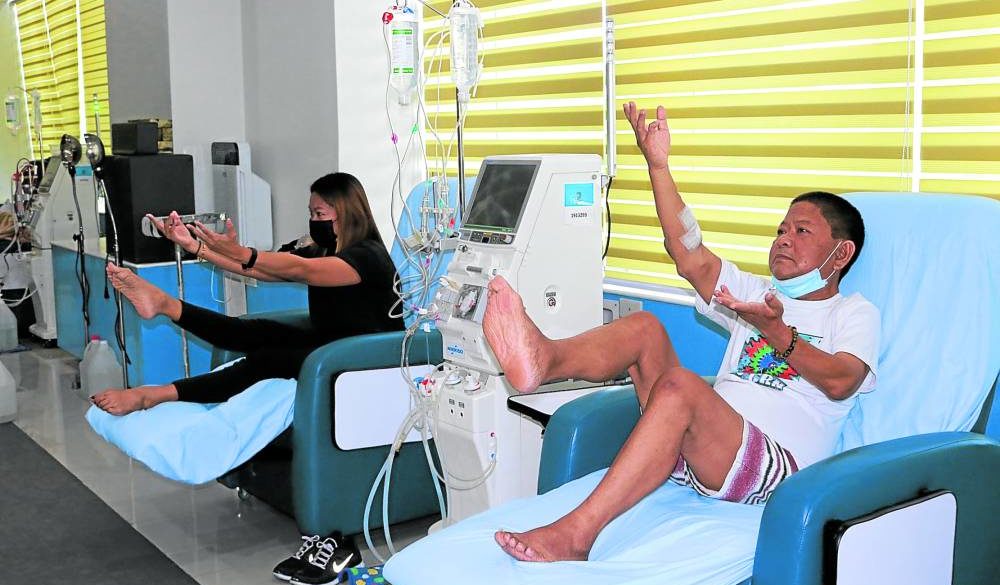 Brezhnev Larlar and his former student improvise movements on their chairs while undergoing dialysis.

Enabling the disabled through dance

Mentor and choreographer Brezhnev Larlar never knew he was born with kidney failure until later in life. He was too busy enjoying his scholarship at the Australian Ballet School and careers in Ballet Philippines and “Miss Saigon” in London, and running his own dance company in Cavite.

His ailment was triggered in the aughts when he taught in a school in Makati. The pressure from students who were gung-ho international dance competitors and stage parents who demanded lead roles and solos for their daughters took its toll on his health.

“I wanted to develop future artists for the Philippines, but the studio became a factory for robots. I faced many anxieties,” he recalls.

Larlar has since undergone several surgeries—a gall bladder removal and an emergency catheter in the neck for a hemodialysis. When he was diagnosed with kidney failure, a fistula was grafted into the arm for his regular dialysis. Although Larlar has been teaching, albeit virtually, throughout the pandemic, his movements are restricted.

While undergoing dialysis on the clinic bed, Larlar would make graceful movements with his head, legs and feet. His limbs would sway rhythmically to the sounds of the dialysis machine and its alarm. The nurses would be amused.

As a person with disability (PWD), Larlar believes that dance offers infinite possibilities to anybody regardless of their physical limitations.

Recently, he relaunched the Danceability class via Zoom to cater to everybody. Even before the pandemic, the live Danceability classes attracted a diverse range of students—regular people with no dance training; the deaf-mute; the blind, the crippled; patients with Parkinson’s disease, Down syndrome, autism, polio and cancer in the advanced stage; amputees; and dancers undergoing teacher training.

Danceability was developed by Italian American choreographer Alito Alessi, whose mother was bound to a wheelchair and who had a sister with polio.

While teaching modern dance to little children, he saw how movements boosted their self-esteem and improved their ability to communicate. Alessi then created a dance company that defied disability stereotypes in 1987. In 2013, he conducted a Danceability teachers’ workshop at the Cultural Center of the Philippines, participated in by Larlar.

The term “danceability” is a reproach to the word “disability,” which tends to isolate PWDs. Believing in inclusivity, Alessi defined “danceability” as a study of movement improvisation for all types of people. The final objective in each session is to create a sense of community amid the diversity. He believes that people’s physical or mental conditions are not problems but opportunities for learning.

Learning from each other

Normal people can learn from the disabled, and vice versa. It doesn’t matter if the student doesn’t understand or hear the verbal instructions, as long as one explores space. Danceability is not therapy.

The intention is not to change the person but to foster acceptance of everybody as he or she is. It enables the person to use any part of the body to express emotion.

Danceability is based on the principles of feeling the sensations in the body; relationships with dance partners based on nonverbal communications; how timing influences movement changes; making the performance space accessible to everyone; and providing equal opportunities to all.

The session begins in silence, in deference to people who can’t hear or speak. As in any improvisation session, there is no preplanning of steps or choreography.

However, the improvisation is governed by the rules developed by Alexis: action and reaction or being aware of one person’s movement and responding to it; following the lead; dancing in pairs or groups to assure that everyone is learning something, whether they are lying on hospital beds or hanging onto a crutch; using touch to communicate; and variations of themes in movement.

People will interpret the terms or instructions differently. If the instruction is to jump, a normal person would spring from the floor, while a PWD would just lift an arm or finger.

Stillness, a basic term in Danceability’s vocabulary, is usually rendered as freezing like a statue. For people with Parkinson’s disease or cerebral palsy, stillness would mean staying in one place even if the body does involuntary movements. A normal person would interpret fast by running or skipping, while a PWD would crawl.

“This isn’t the kind of dance wherein the body is pushed to the extremes. There are no right or wrong moves,” adds Larlar.

Alessi’s vision is to create performances in streets or public spaces to show society that PWDs can be as expressive as dancers.

Larlar recalled that when he joined Alessi’s workshop, he was touched by the sharing of the PWDs. They forgot about their disabilities when they moved freely in the same space with dancers and movers.

Before the pandemic, Larlar’s two-hour Danceability classes invariably ended with a studio performance, where mall-goers could watch through the studio’s glass wall. In one performance, the normal students forgot their steps, but those with Down syndrome knew their cues and became the dance leaders instead.

The revived Danceability class focuses on body awareness, using body parts to express an emotion and producing sounds with gestures.

The deaf-mute, on the other hand, “makes sounds” through sign language.

He hopes that when the virtual community grows, Larlar can hold onsite rehearsals and produce shows.

Walking his talk, Larlar meditates and executes movements on his own especially when he’s undergoing dialysis.

“Ninety minutes fly by so fast because I apply what I’ve learned when I move my head, arms and feet. When I need to boost my adrenaline, Danceability is the antistressor. It has kept me positive.” —CONTRIBUTED