Chesca Garcia goes on five-city trip to US with family: 'Quite an adventure to say the least' | Lifestyle.INQ ❮ ❯ 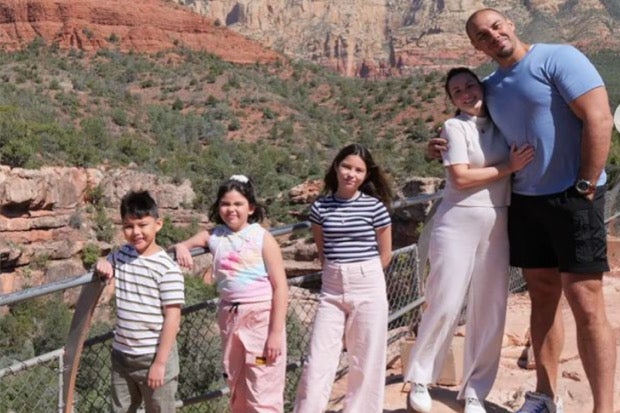 Chesca Garcia goes on five-city trip to US with family: ‘Quite an adventure to say the least’

Celebrity mom Chesca Garcia Kramer had a blast during her short vacation in the US with her family.

Kramer felt that it was one of the greatest trips she had as “it’s been quite an adventure to say the least.” She noted that the trip had taken her to “five states and hours and hours of driving.”

“It’s been one crazy ride and I don’t know if I can do it again,” she said in a post on Instagram today, April 26.

Kramer was particularly thankful for the fun-filled adventure she had while in Texas, sharing two photos taken during a roller-coaster ride with her family.

“I had so much fun in Texas! You can tell just by looking at my face in the picture,” she said in the caption.

Not surprisingly, she enjoyed the trip as “everybody was so game and just so fun to be with.”

“Love my family and friends–for taking the time to really be with us. It’s as if we never ever were apart,” she said.

Falling in love with Sedona and Texas, she said she wouldn’t mind living there.

“Thank you to Rhonabel for the suggestion. You know me so well! Love you! Thank you sis @anntwix for hosting us at your lovely home in Austin–and making our stay a comfortable and relaxing one. I kept my promise to You!”

Kramer has lately been posting photos of their trip, including ones that show her enjoying rides at the Universal Studios and the sites at Lake Arrowhead Resort and Spa and the Big Bear Lake, both in California.  /ra

Chesca Garcia on her years of growing pains: ‘I refused to be taught’