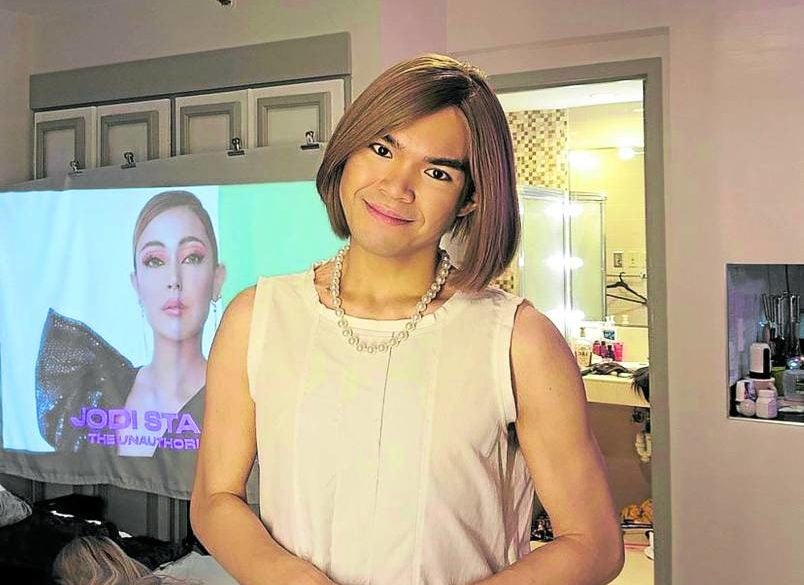 We know from experience that last song syndrome or LSS exists, but is it possible that there’s such a thing as “last catchphrase syndrome?” This may explain why the internet is so obsessed with tweeting, posting, dubbing and listening to its latest favorite phrase: “your daughter is sleeping with my husband.”

This was the denunciation of Dr. Jill Illustre, a scorned housewife in the hit teleserye remake “The Broken Marriage Vow.” Jodi Sta. Maria delivered a standing ovation-worthy portrayal of Jill, but another person is responsible for the earworm that is stuck in everyone’s head. His name is AC Soriano.

Soriano is a rising star on TikTok and Instagram (instagram.com/ItsACsLife), where his impersonations of Jill—complete with the bob, locally woven skirt and micro expressions—are streamed and shared by hundreds of thousands of netizens. People tune in to his late-night live videos where he does skits of “The Broken Marriage Vow,” impersonate Toni Gonzaga or perform antics that send his viewers gagging.

His most popular video yet is when he remixed Jill’s iconic line to shoulder-popping electronic house music by Benny Benassi. It’s a video with so many layers of irony—serious allegations of infidelity set against an upbeat club music, and visuals that we will remember for quite some time.

“Even the placards at rallies carried versions of the line! I saw ‘Your daughters will be sleeping in Malacañang,’” said Soriano, who also volunteers for the vice president’s campaign.

“At Nueva Ecija they played my TikTok (audio) where I said ‘Ang susunod na presidente ng Pilipinas ganyan, ganyan. And then the ‘Satisfaction’ remix was even used as background music as [Robredo] entered the stage. It’s just so funny,” Soriano said.

“It’s gratifying to be [part of a movement]. Even though I don’t get to join all the rallies, when I see people hold a printout of my face—even though sometimes it’s kinda scary—it brings me joy to see that and I think it’s not about me. It’s about the movement, and it’s encouraging to be part of it.”

Unlike his boisterous persona on Instagram, where he often goes live to sing and do monologues while holding a pink microphone, Soriano was surprisingly soft-spoken during an online interview with SUPER.

This is probably how he pulled off the Night of a Thousand Jodi Sta. Maria–Maya dela Rosa, Amor de Jesus, Amor Powers, Marissa Pineda–with such gusto and accuracy.

“With Jodi I copy her microexpressions, how she internalizes her roles. One challenge for me was to do studies of the characters she portrayed. I examined them closely to see their differences. Some of the roles, for example, had the same revenge plot. The characters want vengeance, but I try to understand where the anger is coming from,” he said.

The internet couldn’t get enough of AC—and that includes Sta. Maria. The Kapamilya star had followed Soriano on Instagram, and even congratulated him for his newfound fame. Just this week, Jodi herself delivered the shoulder-popping version of “your daughter” in a Zoom interview.

Indeed, Soriano is off to the exciting part.

The self-proclaimed “ultimate multidog-show superstar” now has many viral videos under his belt, including his uncanny portrayal of Toni Gonzaga. From her “Titanium” number and the “sabay sabay” remark, to her more controversial pronouncements when campaigning for presidential candidate Bongbong Marcos, the Instagram star co-opted these and made it into his own original content. These political content proved to be big hits, too.

But playing the part of Gonzaga is not just for the spoofs. For Soriano, who spent many years following the TV host, it is personal.

Soriano recalled in high school when he would watch “Pinoy Big Brother” and pretend that he’s cohosting the show with Gonzaga. He was also an ardent admirer of the TV personality, following her career for many years, so it came as a disappointment when Gonzaga campaigned for Marcos, whose father and namesake ruled under a martial law regime for more than 20 years.

“I came from a place of heartbreak kasi. Alam mo ‘yung heartbroken ka, na shocks, I wasted so much time idolizing this person. So I used my knowledge to claim myself, to claim that time that I supported her, and I’m proud of it because I was able to send the message across. We were able to claim the songs ‘Titanium’ and ‘Roar’ and we can even sing at rallies in support of Ma’am Leni. That part is already rewarding,” he said.

Soriano’s videos are extra popular on TikTok, where blatant lies on the Marcos dictatorship are being passed off as truth. A recent special report of the Inquirer showed that Marcos-related content amassed billions of views on the social media giant. Robredo recently had just reached more than a billion hits on TikTok.

Despite the numbers and the overwhelming Marcos content on his chosen platform, Soriano is undeterred.

“I believe that I’m not alone in this movement. There are people [on the platform] who are knowledgeable of the facts. As for me, my way of crushing disinformation is through satire, through comedy,” he said. ”Sobrang taken for granted ang comedy as genre, but it is so powerful to open the heart of someone by making them laugh first. After you disarm them, that’s when you drop the truth. I guess that’s my way.”

He added: “It’s even heartening when I receive messages like ‘I’m for [Marcos] but I am so entertained by you.’ Sometimes I reply to them and ask them if I can talk to them, but most of the time they do not respond.”

Soriano may be a digital content creator, but he has also stepped out of the internet to volunteer for Robredo’s campaigns–and not just the printed bubble heads of his face.

“Of course there is this extra pressure that when you tweet you also have to walk the talk. It’s easy to tweet that I’m against this, I support this, but it’s much greater to bring your statement to the streets,” he said.

Sometimes AC can be spotted hosting the sorties, but there are also times when he is also with the crowd, where he gets to hear more of the stories of why people come to the event.

“It’s then that I’m more in touch, I get to know what kind of future they want [for the country],” he said.