Everything with chocolate in this farm-to-table degustation | Inquirer Lifestyle ❮ ❯ 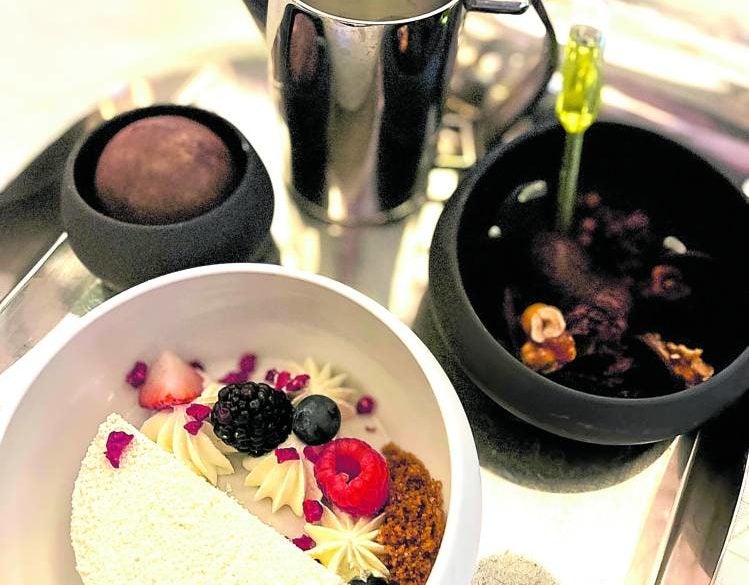 Everything with chocolate in this farm-to-table degustation

Cacao is called the food of the gods. But for some, it is food that makes dreams come true.

Arman Agravante’s father was able to send him and his siblings to school because of cacao. He eventually became a seafarer. Years before he retired, he thought of what business to get into upon retirement.“I bought a farm and planted rubber trees, bananas and cacao. I chose cacao because its yield is year-round. There are off-peaks but there is always something to harvest,” he said. He invested in an 8-hectare property in Antipas, North Cotabato.

Two out of the 8 ha were dedicated to three varieties of cacao. Agravante takes special pride in growing mostly the W10 cacao variety. It’s described as having big seeds and thin pods. It is productive and tastes sweet.

“If you must compare it to something you are familiar with, you can compare it to the smell of Cadbury chocolates. That’s how enticing W10 is in its raw form,” Agravante said.

This cacao variety was what brought Auro Chocolate founders Mark Ocampo and Kelly Go to Agravante’s farm. The first ocular visit opened the doors to a partnership with the award-winning chocolate brand. The partnership began four years ago, but this year, Agravante’s farm became the exclusive supplier of beans for the collaboration of Auro and Solaire Resort and Casino in Pasay City.

“We’re very proud. We didn’t expect that it would come to this. We only planted cacao for income, but we are here. We’re thankful for the opportunity to be recognized like this,” said Agravante.

He and his family sat at a table of honor at a recent one-night-only chocolate degustation at Finestra Italian Steakhouse in Solaire. The beans and other parts of the cacao from their farm were turned into decadent dishes at the upscale restaurant.

Chef Alan Marchetti dedicated an entire year to coming up with the menu for one night.

“One year of trying, destroying again, starting again from zero. We studied how to combine the flavors of meat and fish,” said Marchetti.

He started off with Tonno Al Cacao (tuna ceviche with raw cacao shavings) paired with Cava Cuvee D.S Brut before heading to the hot starter of Coda Di Manzo (oxtail cubes with dark chocolate sauce), which was paired with Cabernet Sauvignon. Marchetti was specially proud of the oxtail dish.

“It melts in your mouth, the pistachio gives it the nuttiness. So everything came together in the oxtail,” he said.

Star of the night

Pasta Ripiena is chocolate fagottini filled with foie gras and porcini. The dish looked very simple but it was a delight in the mouth. This is the chef’s favorite from the night because it complemented everything. It was paired with Le Poiane Valpolicella-Classico Ripasso.

But the star of the night was Tris Al Cioccolato. Three desserts were served to showcase Auro, such as salted caramel popcorn covered by a dome of Auro dark chocolate, which melted with the warm milk that came with it. The second was Auro milk chocolate cake topped with hazelnut and Finestra olive oil.

Marchetti’s menu will not be replicated any time soon, but guests of Finestra can buy the Solaire-exclusive Auro chocolates. They come in Olive Oil and Sea Salt, Hazelnut and Mango, and Calamansi and Basil white chocolate.

“They will be our signature chocolates. I like to work with local companies or local producers. I think it’s very important to try to help the community wherever you are,” said Marchetti.