Too young to vote, they found ways to be part of the elections | Inquirer Lifestyle ❮ ❯ 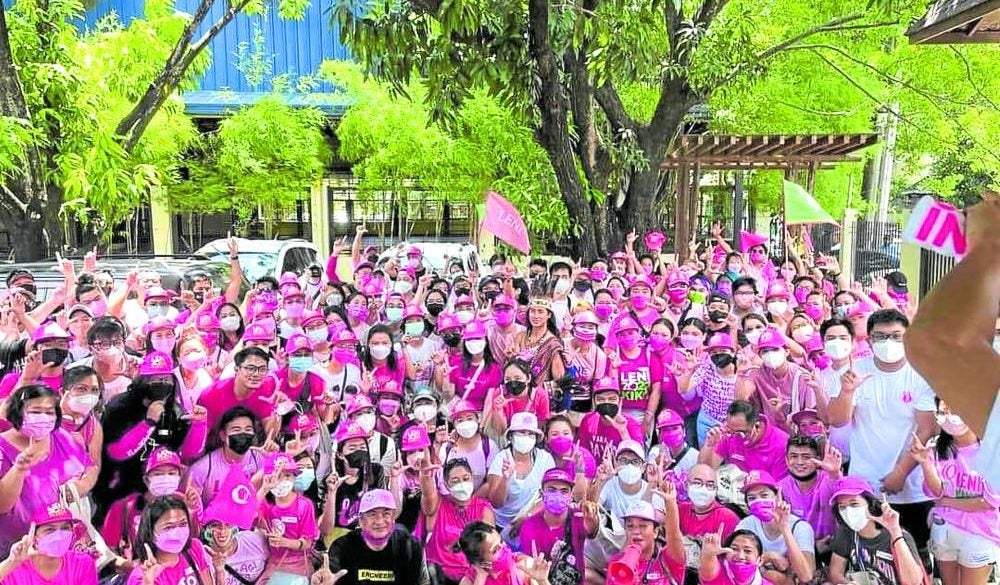 “I’m sad but I have no regrets. I am disheartened but I will continue to keep my spirits up for the dream I have for the country,” says a youth volunteer of the election result. Above, volunteers of the Leni-Kiko campaign

Too young to vote, they found ways to be part of the elections

When Jake Obedoza volunteered for the house-to-house campaign for Vice President Leni Robredo and Kiko Pangilinan, he told himself that school would be the top priority, and that the campaign would only be squeezed in according to his schedule.

“The ending was that acads (academics) were squeezed in for the Vice President’s campaign,” the 17-year-old student said.

Obedoza is just one of the many volunteers who were not old enough to vote in the recent elections, but have gone house to house the past 90 days to convince their kababayan to elect Robredo for president. He would wake up at 5 a.m. and prepare for the day’s campaign—just as he did in school.

“In this campaign I felt like my days became even more meaningful, like I physically went back to school again,” he said in an interview.

Robredo may have lost the quick count of election returns, but as University of the Philippines political science professor Dr. Jean Encinas-Franco said in a previous interview, “it is actually [presidential candidate] Leni and [vice presidential candidate] Kiko who have captured the hearts and minds of especially the young people who have supported them.”

At press time, Robredo is at far second with 14.8 million votes, while Ferdinand “Bongbong” Marcos Jr., son and namesake of the late dictator, leads with 31.1 million votes. As of Thursday, 98.35 percent of election results have been transmitted.

“I’m sad but I have no regrets. I am disheartened but I will continue to keep my spirits up for the dream I have for the country,” said Jobert Pillas, 17, who also did house-to-house campaign for Robredo.

Robredo’s army of impassioned young volunteers played a pivotal role in delivering votes from the provinces and cities. While the volunteers were often told not to meddle in politics because they were not old enough to cast their votes, they made sure to let their voices be heard in other ways.

Even Robredo was amazed by the investment and involvement of young people in the elections.

First-time volunteer Gabriel Tiongson said that he wanted to help undecided voters make an informed decision. His experience was generally good, although he did encounter some voters who would ask them to leave or would yell the name of their preferred candidate.

Obedoza said that his own family did not understand why he was supporting a different candidate, but he also encountered people who were amazed by his dedication to campaign for good governance despite his relatively young age.

Though election results are not going according to their plan, the volunteers said that they have picked up many things while talking to their fellow Filipinos.

“I think that what I learned during this time was to love the Philippines even though it’s hard,” Pillas said, who recalled talking to at least 20 people during house-to-house campaigns. “Because when I volunteered, I paid for my own food, I gave my energy even though I was tired.”

The importance of listening to the stories of Filipinos was also another thing that shaped his views as a Filipino.

For Obedoza, he witnessed during the past weeks the true power of bayanihan, or the Filipino culture of helping uplift each other.

The Zoomers may have been disappointed by the turn of events, but those who spoke to To be You were undeterred by the count. They said that they would campaign again in the next elections should a candidate like Robredo—who embodies good governance and genuine drive to uplift the people—run for office.

“Especially in the next elections, I will finally be among the population who have the power to change the system. I will be a registered voter then,” said Crisostomo, who asked not to reveal his real name.

“I will do all these things again for my fellow Filipinos because I know what is at stake here—my future and my life,” he added.

Tiongson added that he is also willing to go through the grueling campaign again, as long as the candidate has a clean track record with no corruption allegations, just like the Vice President.

Pillas, meanwhile, took to heart what Robredo said earlier this week, that the fight for good governance does not end with the elections.

“Now I will not think twice to stand up and join the crusade to uplift the lives of Filipinos. Just one proof is that our Facebook page, the Robredo People’s Council Makati, has become the Angat Buhay RPC Makati. This shows our collective step to the path of hope for the country,” said Pillas.